This event was a networking social for AUSA members and non-members who are part of the military and defense manufacturing community in southeast Michigan.

Attendees included AUSA members and Detroit Arsenal-based Army officials, as well as over 100 Air Force, Marine, and Navy members and private citizens who gathered to honor the military. 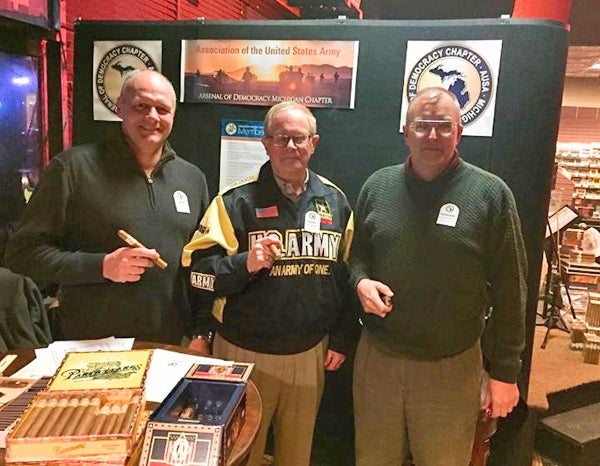 The event, with a $20 fee, provided attendees with a premium cigar of choice, food, a wine tasting demonstration, a tutorial on cigar manufacturing, information on how to select a cigar, and a cigar-drink pairing tutorial.

A specialty stout ale was provide to the guests courtesy of Dan Jenuwine, the lounge’s owner, who also collected donated cigars and accessories to fill a bin for shipment troops deployed various locations in southwest Asia.

The transportation of these items, valued at approximately $6,000, was provided by airmen assigned to the Selfridge, Michigan Air National Guard.

The donations, from the chapter and the lounge, arrived in-country for the troops within three days of the event.

AUSA chapter members including Alan Parks, who retired from the Air Force as a senior noncommissioned officer, and Chris Haag, from the chapter’s Young Professionals group, took an active role in assuring the success of this event.

AUSA membership packets were available at the registration table and the President’s Table for the over 150 attendees, and areas were set up to provide both candid and posed photographs for the guests.

Over 20 of the attendees were Army civilian employees from the Detroit Arsenal, the only active Department of Defense installation in Michigan.

At the close of the event, 10 new AUSA members had joined the ranks of the Arsenal of Democracy Chapter, and many new relationships were forged – making our team stronger and more ready to take on new missions.