Whether Army leadership wants to embrace social media – and there are plenty of advocates for both perspectives – it is not going away.

A panel that included field grade officers and a nationally recognized author, firmly in the social media proponents’ camp, outlined a blueprint for both the Army as an institution and soldiers as individuals to move forward accordingly.

Speaking before a room of peers, mentors and interested parties at the 2016 Association of the United States Army Annual Meeting and Exposition, the four – Maj. Joe Byerly, Lt. Col. Drew Steadman, Maj. Nate Finney, and author/Army officer Jessica Scott – acknowledged both the potential windfalls and pitfalls in the social-media arena.

Adin Dobkin, the communications director of the Military Writers Guild, moderated the discussion.

The guild provides an avenue to promote dialogue among military professionals. The panelists all play active roles within the guild.

In introducing the panel, Dobkin asked them to address their views of what he called “the intersection of digital technology and the professional bonds of the military.”

Before asking the panelists to start, Dobkin issued a somewhat foreboding admonishment: ISIS and Russia are using social media to foster their propaganda efforts. It would be wise for the Army to do so as well. On the upside, he cited social media’s “inherently positive potential” for “improving the profession of arms.”

Their message: A well-managed social-media profile requires a sharp sense of balance. Knowing what to say, when to say it, and in what context, is essential.

Each has assumed a key role in fostering the both their own and the Army’s social-media presence.

Byerly is creator and editor of the Green Notebook, a personal and professional blog/web site that he uses as a forum for his own and his readers’ views on their service.

“When you look at the current environment, social media is here to stay. It’s being used in war as we speak. You can either avoid it altogether or jump in and learn its space,” Byerly said.

Steadman is founder and editor of The Military Leader, a web site dedicated to providing military leaders with an online forum dedicated to sharing insights and resource.

A key question relates to how a commander should respond to someone taking risks on social media platforms, he said. 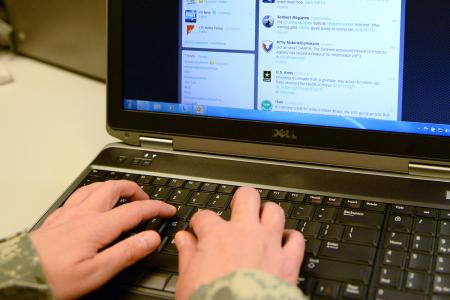 Even with regulations that address how far one can go, Steadman said, “Forthright engagement – what their position is, and what they hope to gain by it – is important. If a commander is looking at his unit, stewarding his profession, he or she should see that as an intellectual achievement.”

Finney co-founded and edits The Strategy Bridge, a web page dedicated (as its name suggests) to strategy and planning. When he first started blogging, he said, it was safer to remain anonymous.

“I recommend to younger folks that what you’re bringing in are your thoughts and experiences. You build up a personal brand,” he added.

Doing so, Scott wrote the Coming Home series, a group of novels and short stories that use fiction to relay the emotions associated with deployments in ways that in all likelihood cannot be expressed in non-fictional prose.

“You can’t just jump in and be the master of the [cyberspace] environment from day one,” Scott said.

“But if we’re leaders, we’re in the business of assuming risk. You can either completely abandon the space, or you can jump in and be daring,” she noted.

Each panelist believed that while the Army should encourage soldiers’ thoughtful and positive use of social media sites, lines of demarcation between career and personal opinion could be vague until they are crossed – whether inadvertently or on purpose.

Postings that seemed innocent when they were written could explode into internet maelstroms, with significant ramifications to the poster and his or her superiors. In such cases, effective damage control could range from doing nothing until the hubbub subsides to calling in public-affairs professionals to handle what they are trained to do, in cases where the Army is directly affected.

Scott described one such incident, in which she published a personally focused article on what she thought ISIS really wants. Afterward, she said, she paid no attention to her Facebook account for about four hours.

When she checked it again, Scott found her posting had been populated with a bevy of angry responses that included gruesome photos of beheadings – stuff she did not want populating her site. She quickly had to scrub her site of the undesirable responses.

They also cautioned that Army leadership should stay away from fully institutionalizing social media activity.

If you try to do something institutionally, from the top down, I think it would fail,” Byerly said.

“A good command structure will encourage people to write … in a professional manner,” Finney said.

Such an approach can provide soldiers in a formation with a positive sense of empowerment, Finney said, but not everyone.

“Some people don’t want this forced upon them. For some, just making them get onto Twitter could drive them to get out of the Army altogether,” Scott said.

They also advised their audience that just because someone posts something he or she believes is important, it still may fall upon deaf ears.

“I tell you, you have to fight for every reader you get,” Steadman said. “You post and re-post. It’s a constant commitment. Only the best will get liked, read, and shared,” he said.