The general membership of the Central Texas-Fort Hood Chapter, Association of the U.S. Army, had the opportunity to learn about the current state and the future of Fort Hood from Lt. Gen. Sean MacFarland, III Corps and Fort Hood commander, during a dinner meeting at the Killeen Civic and Conference Center. 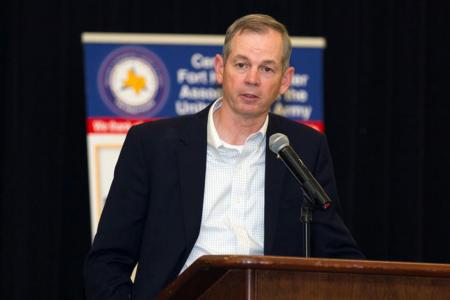 One main topic of note was that while sequestration has shrunk the number of personnel on post by 10 percent in the last year, Fort Hood still represents about 10 percent of the active-duty Army strength, MacFarland said.

“(III Corps) still has over 20,000 soldiers deployed in Europe, Korea, Iraq, Afghanistan, Kuwait and various other places,” MacFarland said of the corps, that oversees units from Fort Hood, Fort Bliss, Fort Carson, Colo. and Fort Riley, Kan. “Almost 4,000 of those soldiers are from Fort Hood.”

While the III Corps headquarters element returned from a year-long deployment to the Middle East to fight the Islamic State in late August, the unit is already preparing for the necessary exercises and training to return in 2017 to continue the mission, he said.

“I think the defeat of ISIS is more and more imminent with every passing day, particularly in Iraq, where ground forces are still led by a III Corps unit – 1st Infantry Division, Fort Riley,” he said.

Despite the budget challenges the military faces, the Army is currently conducting eight named operations – all of which have deployed III Corps soldiers, MacFarland added.

“The Army is actually providing 46 percent – nearly half – of all aggressive forces around the world,” he said.

Adding, “All while the Army has decreased to its lowest manning level since before World War II and [brought] modernization to a virtual halt to make ends meet.”

Soldiers are now spending approximately 14 1/2 months at home between nine-month deployments, he said. During their time at home, the soldiers are in the field training or going to the National Training Center at Fort Irwin, Calif., to certify for their next rotation.

“Unfortunately, our civilian workforce won’t be able to pick up the slack because they have also been cut by about 20 percent due to budget restrictions,” MacFarland said.

He added, “As fewer soldiers and Department of the Army civilians find themselves doing more, they have also been forced to perform minor miracles in often substandard and deteriorating [buildings and equipment].”

Approximately 21 percent of the Army’s infrastructure is also considered obsolete and in excess of Army needs, he said, but the federal government will not allow the Army to divest itself of the excess. Because of this, the Army is spending more than $500 million a year maintaining these facilities.

“As a result, soldiers at Fort Hood are living and working in buildings that Elvis Presley would recognize,” he said. At an installation representing one-tenth of the Army, a third of Fort Hood’s aircraft hangars and motor pools are classified as unsatisfactory. Approximately half of the barracks are listed as unsatisfactory, MacFarland said.

“Neither of our wash racks used for cleaning our combat vehicles after training work properly. Grey Army Airfield’s runway needs repair. As these facilities deteriorate, living and working conditions for our soldiers deteriorate right along with them,” he said.

Adding, “And don’t think for a minute that they haven’t noticed.”

On a positive note, the 1st Cavalry Division headquarters building is currently in the process of a renovation.

While the building is the oldest division headquarters in the Army, it is also the only division to not receive a new building within the last 10 years, he said. The current building design was unable to accommodate modern information technology and the renovation has uncovered a lot of asbestos.

“We can’t afford to build a new headquarters, so we’re fixing up what we have. We’ll have a facility that is about 90 percent as capable as a new headquarters would have been, but at the cost of about 20 percent of the price of a new building and about five years faster,” MacFarland said.

The new clean energy farm, which will consist of solar and wind power, will help to defray some of those budget issues over time, however. “We’ve taken the first steps toward what will be the largest renewable energy project in the United States Army,” he said.

“The 15-megawatt on-site solar project combined with 65-kilowatt off-post wind farm will provide Fort Hood with nearly half of our power needs at a lower cost for at least the next 30 years. This will ensure our soldiers and their family members will have the electricity they need and our (training facilities) will remain powered up,” he noted.

The commanding general also took the time to thank the surrounding communities for their dedication to the post and support of the service members and families stationed at Fort Hood.

Also during the meeting, AUSA presented an award to the 1st Cavalry Division for having the largest active-duty division membership in the association.

During the meeting, several Vietnam veterans from the local area were honored for their service as part of the 50th anniversary of the Vietnam War.

(Editor’s note: This article was published in AUSA News with permission from the Killeen Dailey Herald.)