Wearing a short-sleeve T-shirt in the frigid cold with his face painted black and gold, the cadet joined other West Point classmates in taunting their rival midshipmen Saturday before the Army-Navy game.

“We beat Temple! We beat Temple!” they belted, referring to the Army’s first win of the season to the Temple Owls, a team that managed to beat Navy in the American Athletic Conference championship game a week before. 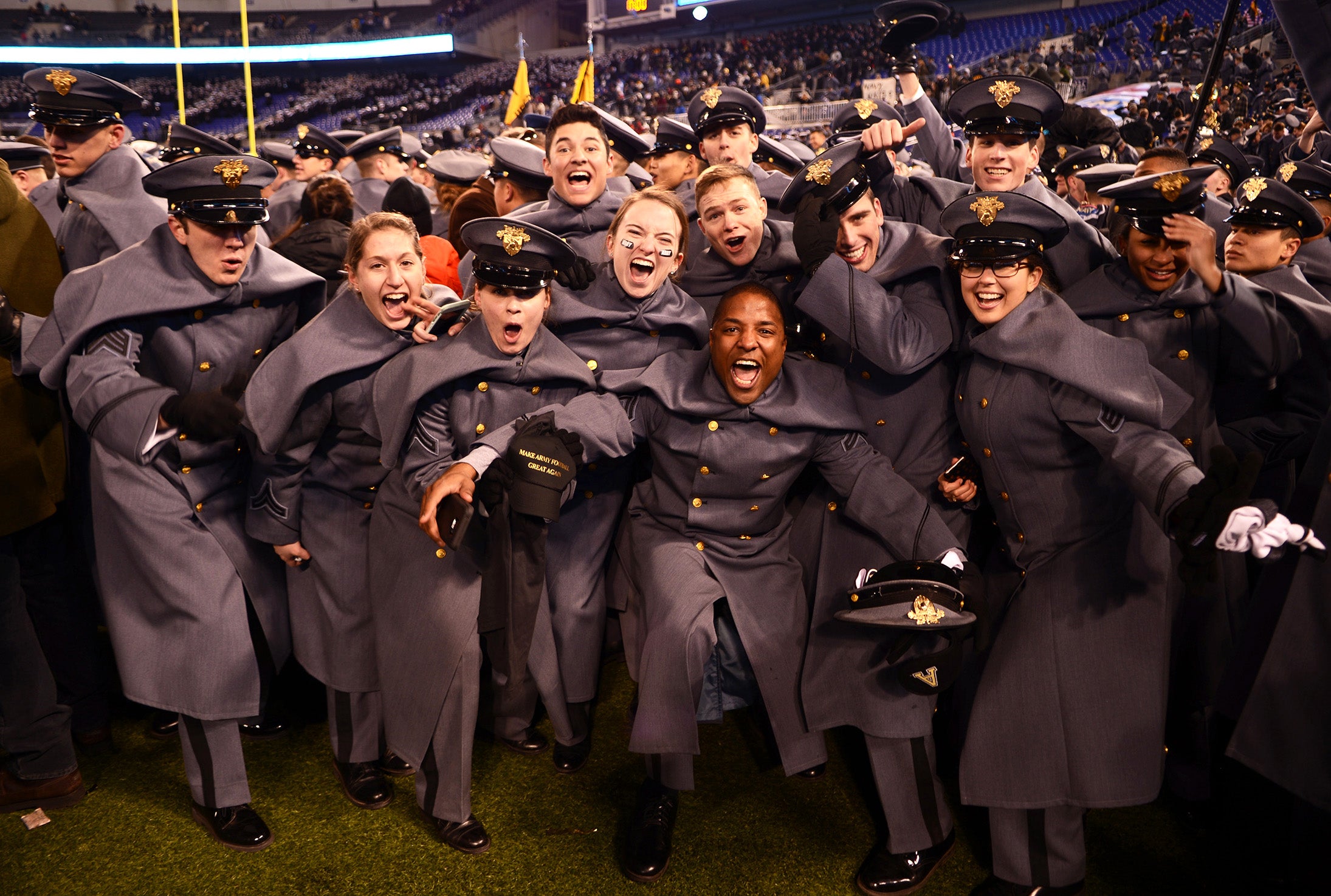 Cadets from the U.S. Military Academy celebrate in the middle of the football field after their victory over the U.S. Naval Academy. The victory broke Army’s 14-year losing streak. (Photo by Sgt. Jose A. Torres Jr.)

The midshipmen waited until it was their turn and then quickly responded with a chant of their own: “14 years! 14 years!” – the number of years since the last time Army won against Navy on the gridiron.

“This is an unforgettable experience,” Alek Kauffman, the cadet leading the Army chant, said about the annual game. “It’s my favorite day of the whole year.”

A few hours later, the day got much better for Kauffman and his fellow cadets when the Army sneaked by with a 21-17 victory over their archrival.

“It still doesn’t even feel like it’s real,” said Edgar Poe, a senior wide receiver with the Black Knights, following the game. “People were always talking about the [losing] streak. We’re starting our own streak now.”

Swarms of cadets emptied the bleachers and rushed onto the field after the final seconds ticked away. Army players, like senior quarterback Ahmad Bradshaw, were caught up in the mayhem.

“I honestly just went blank [when] I saw a bunch of cadets running at me,” he said. “It was an amazing feeling. ... We haven’t won in 14 years so they were waiting for that to happen.”

“They took my helmet,” Poe chimed in, grinning. “I have no idea where it is.”

At the annual event, known as “America’s game,” the pageantry of marching cadets and midshipmen joined a sellout crowd of loyal fans who fervidly cheered as the teams faced each other for the 117th time.

“It’s one of the greatest rivalries of sports history,” observed Chief of Staff of the Army Gen. Mark A. Milley before the game.

“But at the end of the day, no matter who wins or loses, these young cadets and midshipmen will all get commissioned as officers in the United States military, and shoulder-to-shoulder they will fight and destroy the enemies of the United States of America when the time comes.”

This year, the Army football team donned special uniforms honoring the 82nd Airborne Division paratroopers of World War II. Their Jerseys sported the 82nd patch, while their helmets were emblazoned with symbols of individual units in the division, along with a lattice design similar to the netting covering of the helmets worn by the paratroopers during the war.

Three days after the 75th anniversary of the Pearl Harbor attacks, which catapulted the nation into the war, Milley said, it was an appropriate time to honor the 82nd, the Army’s only paratrooper division.

“We wanted to single out the 82nd as a tribute to soldiers from World War II who formed the greatest generation,” Milley said, adding that each and every Army division is special.

Retired Command Sgt. Maj. Kenneth “Rock” Merritt, who jumped into enemy territory with the 82nd during the D-Day invasion, represented the division at the game.

Walking around gloveless in temperatures in the mid-30s, he shrugged when he was given a pair of gloves to wear. 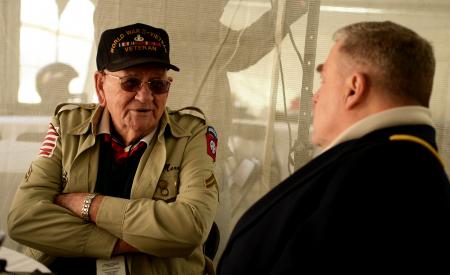 “This weather is not near as cold as it was in the Battle of the Bulge. I almost froze to death,” he later said, referring to the major World War II battle fought during the winter in Belgium. “Today’s weather is nothing compared to that.”

While attending his first Army-Navy game, the hardy 93-year-old sergeant major wasn’t shy about his love for the 82nd, but he also commended today’s military.

“For 70-something odd years I’ve known the 82nd Airborne Division. I think it’s the best division in the world,” Merritt said. “Of course in all of our armed forces today, we have the best trained and educated officers and noncommissioned officers that our [military] has ever produced.”

Minutes before the game, the next generation of Army officers marched onto the field in company formations as loud cheers from Army fans roared throughout M&T Bank Stadium, which is home to the Baltimore Ravens.

Seven cadets then marched out to the center of the field to meet seven midshipmen for a “prisoner exchange,” a tradition in which members of both academies who have studied in a semester-long exchange program are returned to their brethren.

When dismissed, the seven cadets ran off the field and jumped into the stands, eliciting thunderous applause from their fellow cadets.

“It’s a great feeling to be back home with my school,” said Cadet Jadalaine Ferrer, one of the exchange students. “All semester we’ve been talking about how it’s nice to take a break. But toward the end, all seven of us were really excited to be back.”

Even if the game’s winning score was what the cadets ultimately wanted, Ferrer and others agreed that the spirit of the yearly matchup is a worthy experience in itself.

“Regardless of the outcome, we’re one team in the end,” Ferrer said before the game. “As soon as this game is over we go right back to being brother and sister.”