Retired Col. John Miller is on a mission to see that every local man and woman who served in the armed forces during the Vietnam War era receives a commemorative pin.

Miller is president of the Association of the U.S. Army’s Stonewall Jackson Chapter and chairman of the Roanoke-area Vietnam Commemoration Committee. 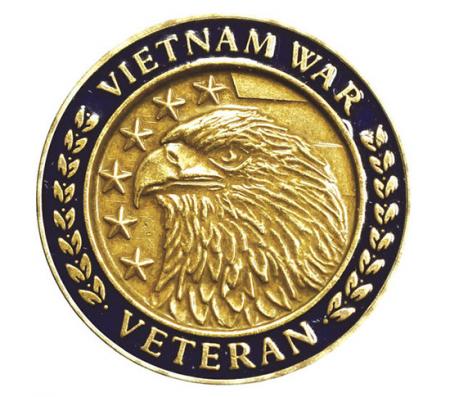 The Vietnam Veterans lapel pin features an eagle’s head on the obverse (right) and six stars to represent U.S. allies.

He recently presented the lapel pins to several veterans during a town hall meeting at the Salem VA Medical Center.

“Our government instituted an effort to do what I believe should have been done 50 years ago, and that is to thank and honor the Vietnam veteran and his or her family.” Miller said.

Adding, “No distinction is made between those who served in country, in theater or simply served during that period. All served and deserve recognition.”

The Stonewall Jackson Chapter is just one of many organizations authorized by the Department of Defense to award the pins. The Salem VA and the Roanoke Valley Veterans Council joined Miller during the ceremony where he pinned several veterans.

Information about the pin can be found at: www.vietnamwar50th.com.

(Editor’s note: This article was published in AUSA News with permission from The Roanoke Times.)