Conferees from the House and Senate will work together to hammer out a final version of the bill. Their major hurdle: Resolving the topline dollar amount.

Both versions are above the administration’s $603 billion base defense spending request and the Budget Control Act caps for fiscal 2018, which are set at $549 billion.

There are many provisions contained in the bills that are important to AUSA, its members and the Army.

On Oct. 20, AUSA along with its other partners in The Military Coalition, a group representing 5.5 million currently serving, retired, and former service members and their families and survivors, weighed in on some of those provisions.

Here are some of the top items:

TMC likewise supports the Senate provision, with regard to survivors of sexual assault, which includes those who allege sexual assault.

More than 270 key congressional staff members were among the guests. The event featured two speakers. The Army chief of staff, Gen. Mark Milley, who addressed the group and described the way forward as the Army continues to provide service to the nation and strength for the future.

After he spoke, the Army’s Acting Secretary Ryan D. McCarthy provided his view of the state of the Army to the gathering that included top leaders of the Army, both military and civilian. 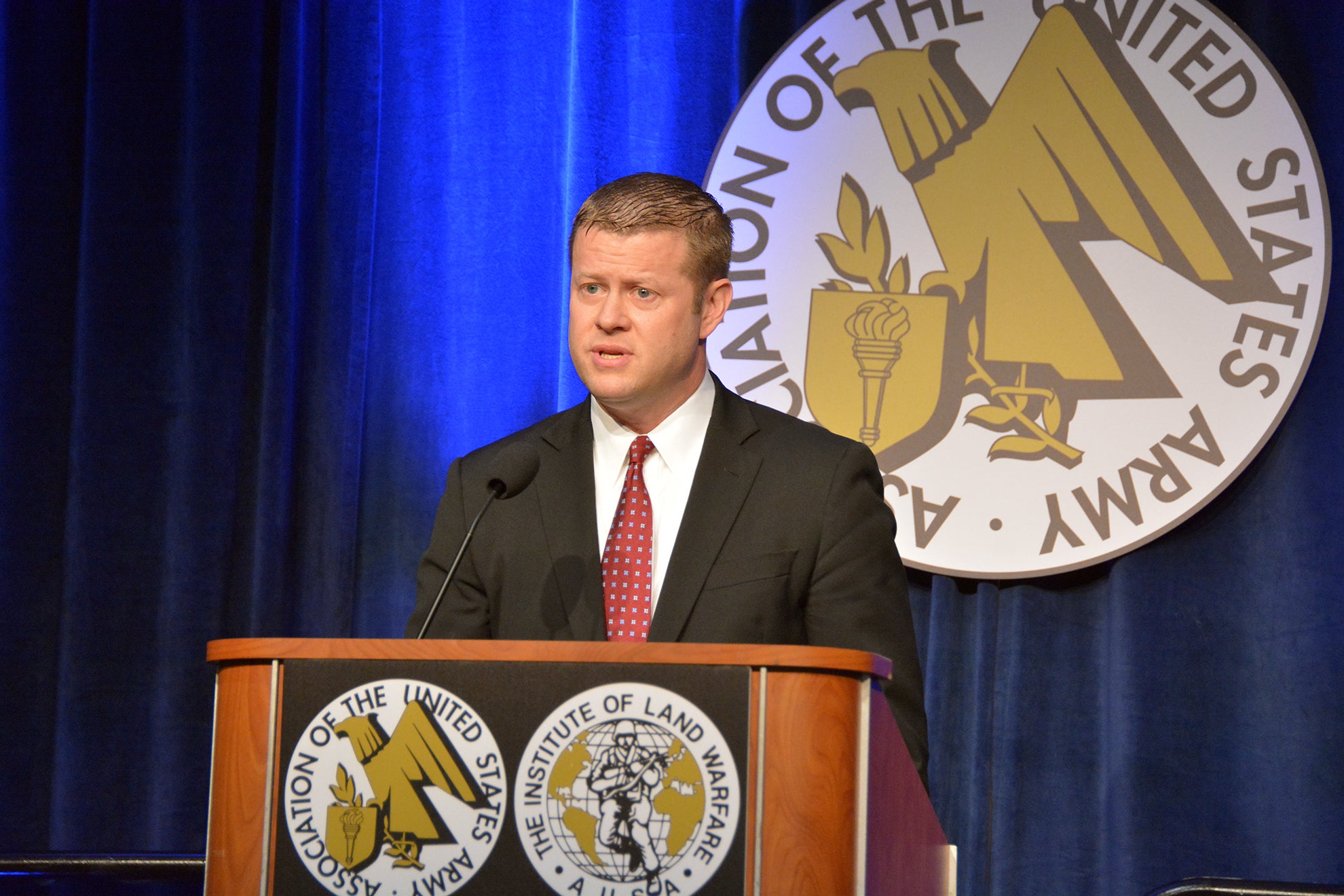 Acting Army Secretary Ryan D. McCarthy provided his view of the state of the Army at the Congressional Staff Breakfast held during the AUSA Annual Meeting and Exposition. (AUSA News photo)

McCarthy told the crowd that failure to pass the FY 18 budget will prevent the Army from modernizing, and “will force us to continue mortgaging our future readiness and lethality.

Congressional paralysis will have profound implications – our adversaries will be emboldened, global stability will continue to decline, and our options to respond to an emergent threat will be reduced.”

“Above all, the Army needs sufficient, sustained, and predictable funding, to restore balance and reduce risk. We defend the nation with a force based on a strategy, not on a budget”, McCarthy said.

He also spoke at length about the Army’s plan to create a command aimed at streamlining Army modernization and one that will “pursue a modernization strategy that balances capacity and capability.”

McCarthy outlined the strategy which McCarthy said he has already initiated along with the Army chief of staff – a strategy that directs the Army to take “aggressive moves and invest against six signature modernization efforts that can be realized in the near and mid-term.”

McCarthy said, “I have initiated a reprioritization of money in the POM, and a science and technology review that will support development of these efforts. And I will continue to invest in them with ruthless prioritization with resources protected across the five-year Future Years Defense Plan.

“First, a precision fires capability that restores US Army dominance in range, munitions, and target acquisition.

“Second, next generation combat vehicles, including optionally-manned variants with the most modern firepower, protection, mobility, and power generation capabilities, to ensure our combat formations can fight and win against any foe.

“Third, future vertical lift platforms – optionally-manned, both attack and lift, that are survivable on the modern and future battlefield.

“Fourth, an Army network that is mobile and expeditionary – that can be used to fight cohesively in contested cyber and electromagnetic environments.

“And, last but not least, soldier lethality that spans all fundamentals – shooting, moving, communicating, protecting and sustaining.”

The new command will draw from within existing force structure, officials said, and is not expected to create civilian job losses or movements.