The gathering took place to recognize the publication of Vets and Pets: Wounded Warriors and the Animals that Help Them Heal by Dava Guerin and Kevin Ferris.

The book tells the stories of 15 service members who were wounded and how service and companion animals – dogs, cats, horses, pigs, and birds of prey – helped them adapt to civilian life. 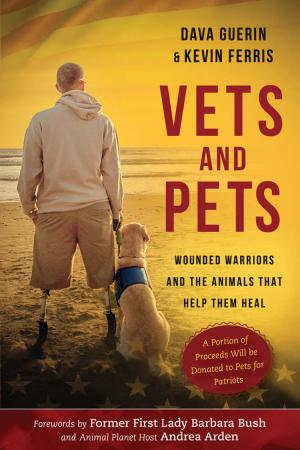 Guerin has been friends with the Bushes since they were in the White House, and Mrs. Bush provided one of the book’s forewords.

On the day of the event, the warriors and their families gathered at the Bush compound on the edge of the Atlantic Ocean. In the crowd were four service dogs, two screech owls and a Vietnamese potbelly pig.

President Bush, 93 years old and in a wheelchair, came to the bottom of the 100-yard driveway to greet the visitors. After a few handshakes and hellos, the group made the trek back to the house, where they were greeted by the 92-year-old Mrs. Bush in her electric scooter.

All the veterans had the opportunity to meet the Bushes and tell their stories.

There was Justin Crabbe, who lost both legs and some fingers after an IED explosion in Afghanistan; his dog Gnome helps with physical activities and in dealing with the public.

Willie did not seem recognize the honor of the occasion and chose to answer the call of nature on the lawn. A Secret Service agent said it was ok to let it be, but Tidwell came prepared with plastic bags. Ricky, one of the screech owls, got excited when meeting the president. “[He] had a slight accident and it landed on 41’s pant leg,” said Guerin. “He just laughed, and that was that.”

The Bushes posed for photos with the veterans and their families before the end of the event, and President Bush followed with a tweet: “Barbara and I loved meeting a few of the patriots and service animals featured in a wonderful new book, Vets and Pets. God bless them all.”

In addition to the meet-and-greet at Walker’s Point, the group appeared on a live show at the local NBC affiliate in Portland and met 140 third-grade students at a Kennebunk Elementary School assembly.

A portion of proceeds from Vets and Pets are being donated to the organization Pets for Patriots.