Defense Secretary Jim Mattis said the international situation today “is the most complex and demanding” he has seen in his four decades of service, and he needs the Army to be “at the top of your game, in body, spirit.

We must be so ready … that everybody in the world will want to deal with [Secretary of State Rex] Tillerson’s Department of State, not the Department of Defense, your warfighting skills” and for every day they are in uniform “to be dedicated to getting better,” he said.

In the keynote address at the 2017 Association of the U.S. Army Annual Meeting and Exposition at the Walter E. Washington Convention Center, Washington, D.C., Mattis cited the persistent threat of terrorists in the Middle East, Russian aggression in Europe and North Korea’s provocations in the Pacific. 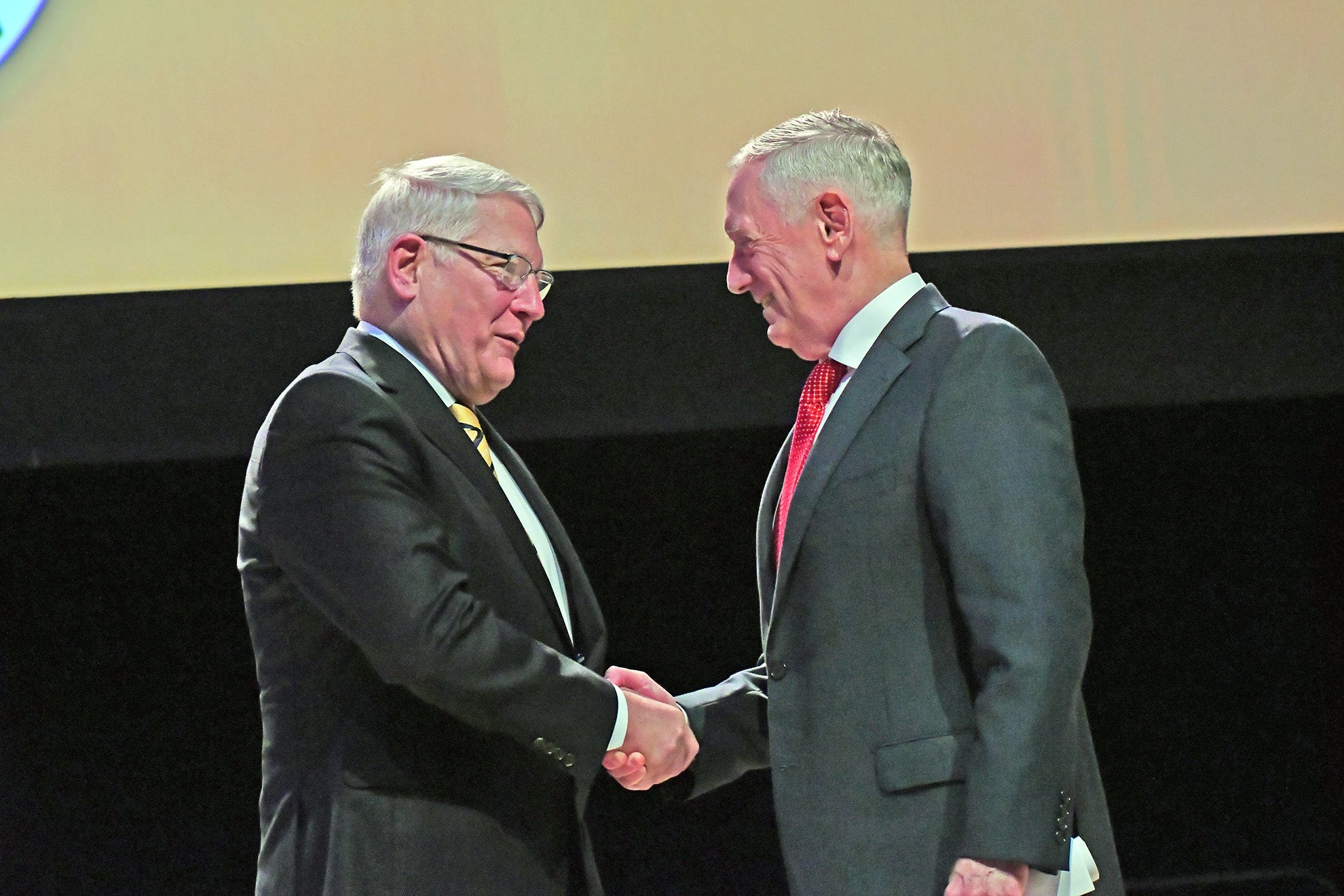 At a question and answer period following his address to an audience of more than 3,000 AUSA members and guests, he was asked what the Army could do about threats from North Korea.

Replying, Mattis said, “It is a diplomatically-led, economic-sanctions buttressed effort to get North Korea off this path.”

But because no one knows what the future may bring, “One thing the U.S Army can do, and that is you’ve got to be ready so we can have military options that our president can employ if needed.”

The secretary repeatedly stressed the need for readiness, which is this year’s theme for the AUSA professional development forum.

He said, “Everything we do must contribute to the increased lethality of our military. We must never lose sight of the fact that we have no God-given right to victory on the battlefield.”

But he expressed his concern that “our competitive edge over our potential adversaries” is eroding “due to budgetary confusion and budget caps,” and said he is “among the majority in this nation that believes we can afford survival. I want the Congress back in the driver’s seat of budget decisions, not in the spectator’s seat.”

He said he has great confidence in the Congress,” but no confidence in automatic budget restraints, a reference to the 2011 Budget Control Act that sets arbitrary limits on spending.

Mattis gave a salute to veterans in the audience who served in Vietnam, then stayed in uniform and built the great Army of today and made him the marine he was.

Otto Kreisher is an independent defense reporter who writes regularly for Seapower, Semper Fi, Leatherneck, Naval Forces and Air Force magazines plus a number of Web-based news outlets. In addition to covering state and national politics and legislation, he has focused on national defense, including covering U.S. combat operations in Grenada, Panama, Kuwait, Somalia and Haiti as well as aboard an aircraft carrier during Operation Iraqi Freedom.