Retired Gen. Carter F. Ham, president and CEO of the Association of the U. S. Army, addressed AUSA’s volunteer leadership at the Chapter Presidents Dinner, the Sunday before the Annual Meeting and Exposition’s opening ceremony on Monday, Oct. 9, at the Walter E. Washington Convention Center in the nation’s capital.

Adding, “I’ve had the privilege of visiting your chapters and your communities and joining in various chapter activities. I have a deeper understanding and appreciation to serve as your president, and I am humbled by your willingness to serve, to lead and make our association stronger.” 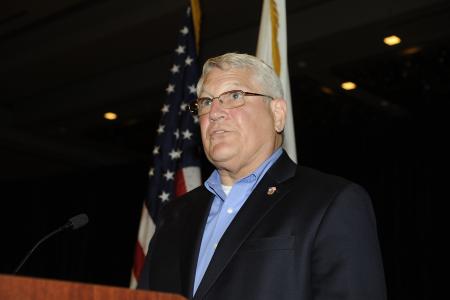 Recognizing the many contributions the volunteer leaders make to AUSA, he said, “What I’ve learned in the last year plus is that your service actually runs much deeper than that – you truly do in very real ways make the Army, your communities and indeed our nation stronger.”

When Ham spoke last year, AUSA membership had “bottomed out at about 61,000.”

He reported to the leaders that this downward trend, running over several years, was not acceptable.

“Today, he said, “because of a year’s worth of extraordinary effort, membership is now over 75,000. That’s an average gain of over 1,000 a month since last year’s Annual Meeting.”

But, he noted, this positive trend to reach this membership level, “is not enough.

In 2017, AUSA’s Membership and Meetings Directorate conducted two training sessions at the Association’s national headquarters in Arlington, Va., that provided the volunteer leaders with the tools necessary to build successful programs and increase membership in their chapters.

The first, in June, was a four-day training program for chapter leaders, and the second, in August, was for new AUSA chapter presidents.

Retired Lt. Gen. Pat McQuistion, AUSA vice president for membership and meetings, praised the chapter volunteers at both sessions for their dedication and for their contributions to the Association.

She also stressed the importance of strong and committed volunteer leaders who unselfishly give of their time and talents to lead our chapters.

Ham called the chapter presidents at their session: “The future of AUSA.”

At the dinner, Ham said, “I think we can do better by sharing our ideas and our best practices to connect more effectively across our Association so that we can learn from one another instead of having to start from scratch.

“AUSA lives and thrives in our 121 chapters throughout the globe. The heart and soul of our Association is you – the committed volunteer leaders and the more than 75,000 members that you represent.

“You bring our Association to life. Without you and without our members, we simply don’t have an Association.”