Apair of soldiers were the top finishers as approximately 35,000 runners persevered through difficult weather conditions to participate in the 33rd Annual Army-Ten Miler in Arlington, Va., and Washington, D.C., Oct. 8.

Army Spc. Haron Lagat of Fort Carson, Colo. was the overall male winner, finishing with a time of 49 minutes, 23 seconds. 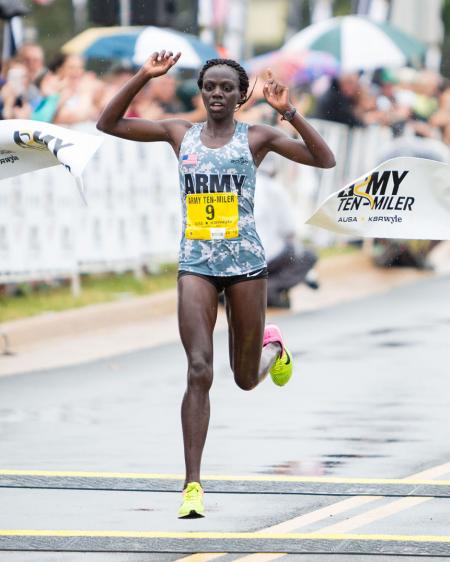 Conducted by the U.S. Army Military District of Washington, the Army Ten-Miler is the world’s third largest 10-mile road race. The USA Track and Field certified course started and finished at the Pentagon, and took runners through a scenic and historic route through Arlington and the District of Columbia.

At 10:08 a.m., well after the elite runners had finished, organizers reclassified the event from a competitive race to a “recreational run,” shortening the course by approximately one mile due to unseasonably high temperatures that approached 80 degrees and humidity that soared well above 80 percent.

Participants who completed the full course after 10:08 were given an official finish time, but were ineligible for official awards.

Those who completed the shortened course were credited with “finisher status,” but their finishing times were not compiled.

Adding, “The Military District of Washington is committed to providing a world-class road race in a safe and secure environment. The decision to downgrade the road race was made in coordination with medical, safety and race operations personnel.”

Throughout the morning, numerous racers and spectators were observed falling ill in the stifling conditions. A joint military medical team partnered with Fire and Emergency Medical Services personnel from Arlington County and Washington, D.C. to provide the first response.

“It was really hot and muggy,” said Army Sgt. 1st Class John Camarillo of Headquarters and Headquarters Company, 1st Battalion, 3rd U.S. Infantry Regiment (The Old Guard), who completed the race as a member of one of four teams representing Joint Base Myer-Henderson Hall (JBM-HH).

“This is probably one of the hottest Army Ten-Milers that I’ve ran,” the four-time participant added as he praised the performance of his fellow JBM-HH runners. “Conditions were really humid today, so it kind of seems like everybody really put their heart into running today, and I think everybody in the end is very proud of what they accomplished today.”

Participating in her first-ever 10-mile race, Army Staff Sgt. Erin Morgan said she was proud to represent JBM-HH, and she credited the support of her colleagues from the Old Guard Fife and Drum Corps for boosting her spirits as she tested her limits. “It was tough out there with the humidity,” the Old Guard Fife and Drum Corps member said. “For me, personal courage was something I had to tap into just to get out there and push myself to the end. Those last two miles were a push, but my company was at mile 8 and 9, so they were cheering me on during the hardest part.”

Several elite competitors underscored the ways in which the Ten-Miler embodied and promoted Army values.

“It’s not just about running, it’s all about what the Army offers, what the Army is all about, and that pride that you just have to wear” Tanui said after becoming the first female runner to cross the finish line. “It’s hard work, courage, selfless service, it’s all the values of the Army that I’m proud of. Being a soldier, being out here pushing out in a race, it kind of motivates someone to apply that in life.”

Army Capt. Robert Cheseret, who finished as the third-place overall male winner, said the race was about more than individual goals. “I think what is special about the Army Ten-Miler is we are running to represent all the soldiers in the Army and all the service members in the military,” he said. “We’re also running to honor our fallen soldiers.”

Running in his 6th Army Ten-Miler, Army Maj. Shane Mantz, a reservist from Lancaster, Pa., said he and his family were particularly inspired by the example of fortitude and resilience set by the more than 150 Wounded Warriors and wheelchair athletes who participated in the race.

He also noted the symbolic significance of the race’s location in the nation’s capital.

“It’s special just being down here in D.C. and being at the heart of the country,” Mantz said. “We always carry the flag all the way through.”