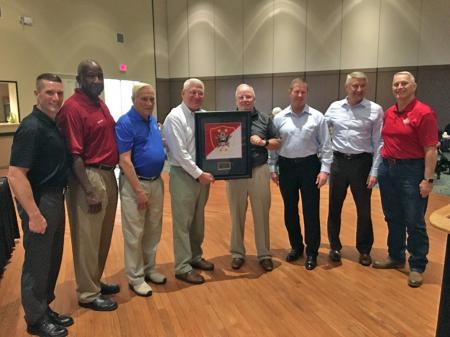 These quarterly meetings enable the SMA and his senior CSMs to meet with the subject matter experts on the Army staff and work specific issues focused on improving the enlisted force.

I sat in on the discussions focused on soldier transition and Soldier for Life.

Both topics received considerable attention from the Army over the last several years, and like any programs they must be reviewed and adjusted to meet the needs of an ever-changing force.

The discussions and subsequent recommendations that stem from these meetings assist the Army staff in making the right adjustments and changes in their areas of responsibility until final implementation and approval.

It is the nature of the Army to look for continuous improvement, and as I listened to the discussions, we can all be proud of the soldier transition and the continued high performance and expectations of the Soldier for Life programs.

The Tuesday morning conference brought together all the conference attendees, including all the nominative CSMs serving at the 2, 3 and 4-star levels of command serving around the Army and in the combatant commands.

During the conference, I listened to a host of presentations that promoted great discussions and critical thinking about potential policy changes affecting the Army and the enlisted force.

The Army Capabilities Integration Center and the Army Center for Initial Military Training both based out of Fort Eustis, Va.; and the United States Army Recruiting Command from Fort Knox, Ky., provided the initial presentations.

There were several great discussions about recruit fitness, soldier fitness goals and standards for recruits graduating from Initial Military Training.

The entire discussion was a great learning process for all the attendees to fully understand the duties of our recruiters working with future soldiers in the Delayed Entry Program and the implementation of the new Occupational Physical Assessment Test, or OPAT.

The OPAT determines a recruit’s physical fitness for service in a military occupational specialty (MOS) just as the Armed Services Vocational Aptitude Battery serves as a predictor of a future soldier’s ability to meet the academic requirements needed to do well in a particular MOS.

For those organizations who have soldiers who are considering transitioning from one MOS to another, especially those career fields with high physical demand tasks, local recruiters near military installations will assist in the administration of the OPAT as part of the transition approval process.

Part of this discussion focused on manning the force, which is one of the four attributes alongside equipping, training and leader development for measuring readiness in a unit.

Getting soldiers to the promotion board when they are fully qualified has always and continues to be a constant area of focus and attention for the Army leadership.

For me and several of the retired SMAs, we also had to reinforce the need for leaders at the company, troop and battery levels to get their specialists and sergeants before the promotion boards when they are fully qualified.

With almost 50 percent of the NCO force serving at the sergeant level, high percentages of these young leaders are needed to step-up and fill the vacancies of those staff sergeants getting promoted or leaving the Army.

Equally, more than 50 percent of the junior enlisted serve at the specialist rank and once fully qualified, these senior soldiers are needed to serve in positions of increased responsibility as a sergeant.

A message from our past experiences to new lieutenants and platoon sergeants about priorities for training within their organization has always been to focus on growing sergeants.

Train and develop your bench of leaders by getting them to their PME schools and courses, promote self-development opportunities like Sergeant Audie Murphy, Sergeant Morales Club, NCO and Soldier of the Month, and empower them to make decisions and to learn from their mistakes.

Each of these initiatives combined with working hard every day in the unit grows an organization that will thrive in combat and excel in training.

Challenges in the Army from the past are still challenges for new fledgling leaders today where the SMA and all the senior CSMs will continue to mentor a new generation of leaders.

As part of the discussion of getting soldiers into school the topic of school seat availability surfaced as some leaders felt the availability of seats in the PME courses did not support their needs.

The Institutional Training Common Operational Picture, or ITCOP allows commanders and their leaders to see the available Noncommissioned Officer Education System (NCOES) seats across all components.

ITCOP offers commanders and leaders a holistic view of training slots available for NCOES and MOS-T courses across the United States.

Under the Total Army School System (TASS) all NCOES and MOS-T courses taught by the Regular Army, Army National Guard and the Army Reserve all support the same Program of Instruction (POI) for all career fields.

So, if a NCOES course at Fort Benning, Ga., is not available, a soldier can attend the same course taught by the Army National Guard at Fort Carson, Col., as an example.

ITCOP enables commanders and leaders to efficiently monitor TASS capacity vacancies in near real-time and capitalize on opportunities to schedule soldiers for training as needed.

Following the TASS discussions was a follow-on discussion on Structured Self Development (SSD).

As part of a soldier’s lifelong learning experience in the Army, SSD links the institutional and operational domains in support of progressive NCOES courses.

SSD consists of five (soon to be six) levels of mandatory development spread across a soldier’s career focused on training ahead in preparation for the next level of NCOES.

SSD is supported by a robust evaluation and feedback process that includes self-assessment tools, increased use of advanced technology like the Army Career Tracker, a secure test environment, achievable requirements, and policies that set the conditions for continuous growth.

When fully implemented, SSD will improve Army readiness by integrating self-development into a lifelong learning approach fostering an environment of continuous learning throughout a soldier’s career.

Part of the improvement discussions on SSD, which the Army implemented in 2009 as part of NCOES, is that now soldiers can expect SSD to become more difficult.

On average these SSD modules are approximately 80 hours of study topics that must be completed prior to attending the next level of NCOES.

Part of the increase in difficulty will be attributed to how soldiers answer questions as part of the testing process, as multiple choice type questions will be give way to complete answers and original thought responses.

Additionally, a soldier’s performance on the SSD exams will be captured and recorded on the Academic Evaluation Report (AER) when attending the follow-on NCOES level courses.

AER’s will provide far more detail about the soldier’s academic and physical performance, including SSD performance in conjunction with their peers in their requisite level of NCOES courses.

Readiness was another key discussion among the senior CSMs as they discussed the challenges with replacing non-deployable soldiers in deploying units.

These discussions encompassed a host of soldier issues that ranged from permanent profiles to temporary profiles to soldiers pending discharge for any number of Chapter discharges.

With these high numbers of deployed soldiers on 9-month deployments or longer, you need to give these units twice the amount of time, 18 months at minimum, in a nondeployed state to maintain readiness across all four attributes of manning, equipping, training and leader development.

The message was clear: all units in the Army and their soldiers, across all three components must be ready to deploy when their time comes around.

“Deploying as an individual soldier is part of our job description,” said one senior leader.

Adding, “And if you can’t move, shoot and communicate and lead from the front in a deployed environment, then this is not the business for you.”

There were several discussions about soldiers with permanent profiles and the quality of these soldiers who wanted to continue to serve in some capacity.

“We want all of our games to be away games, and if you can’t get on the bus, then you probably shouldn’t be on the team,” said another senior leader.

Reducing the number of nondeployable soldiers in units across the entire Army will continue to be a focus for the foreseeable future.

In conjunction with readiness, the My Army Benefits briefing was well received.

The website provides a comprehensive layout of benefits for veterans and retired soldiers.

The website includes not only federal-level benefits, but also provides those benefits available to veterans and retired soldiers at the state level.

Each of the 50 states and four territories provides a wide variety of veteran and family benefits that range from non-taxable retirement pay, to child education benefits for veterans, to minimal benefits for all dependent on the state.

The site is great for those looking for a state where they can maximize the deferred benefits they earned over an honorable career.

Check out My Army Benefits at http://myarmybenefits.us.army.mil/

As part of the SMA’s conference, nine international SMAs were inducted into the International Students Hall of Fame at USASMA.

On Tuesday evening, AUSA’s Omar Bradley Chapter and the city of El Paso hosted the conference attendees at a cultural event at the Southwest University Baseball Park.

The athletes in the group were given the opportunity to hit baseballs in the minor league stadium, be entertained by a local mariachi band and dancers and enjoy the cuisine of West Texas.

The outpouring of support from our AUSA chapter and El Paso was nothing short of amazing, and all the conference attendees were honored with this special recognition event.

On Wednesday evening, all the conference attendees had dinner with those graduating sergeants major in Class 67 and their families who were slated to join their commands in the weeks ahead.

General Ham talked about the role of CSMs and SGMs within the command and the qualities he looked for in a senior enlisted advisor.

He added, “You are the commander’s most trusted advisor. I relied on my sergeant major’s candid assessment of subordinate leaders, both officers and NCOs.”

He also talked about all the advertising campaign slogans used by the Army since he first enlisted in 1973 at the start of the all-volunteer force.

Ham said, “Of all the slogans, the one I like best, the one that rings true as it did years ago, says simply; ‘when we were needed we were there.’”

He noted, “That’s you, you were needed then, you are needed now, you will be needed forever.”

The distinguished guest speaker for the graduation was Warrant Officer One Glenn J. Haughton, the Sergeant Major of the British Army.

Haughton added, “I have no doubt that many graduates of USASMA were the driving force of the current ongoing world-wide NCO development.”

Haughton congratulated the graduates of Class 67 on their accomplishments and noted that because of their attendance in the course, “You will be better leaders, but more importantly better human beings which is good because we need your leadership now more than ever.”