Volunteers are usually the unseen heroes, but for one Team Redstone family, the community made sure their contributions were known. 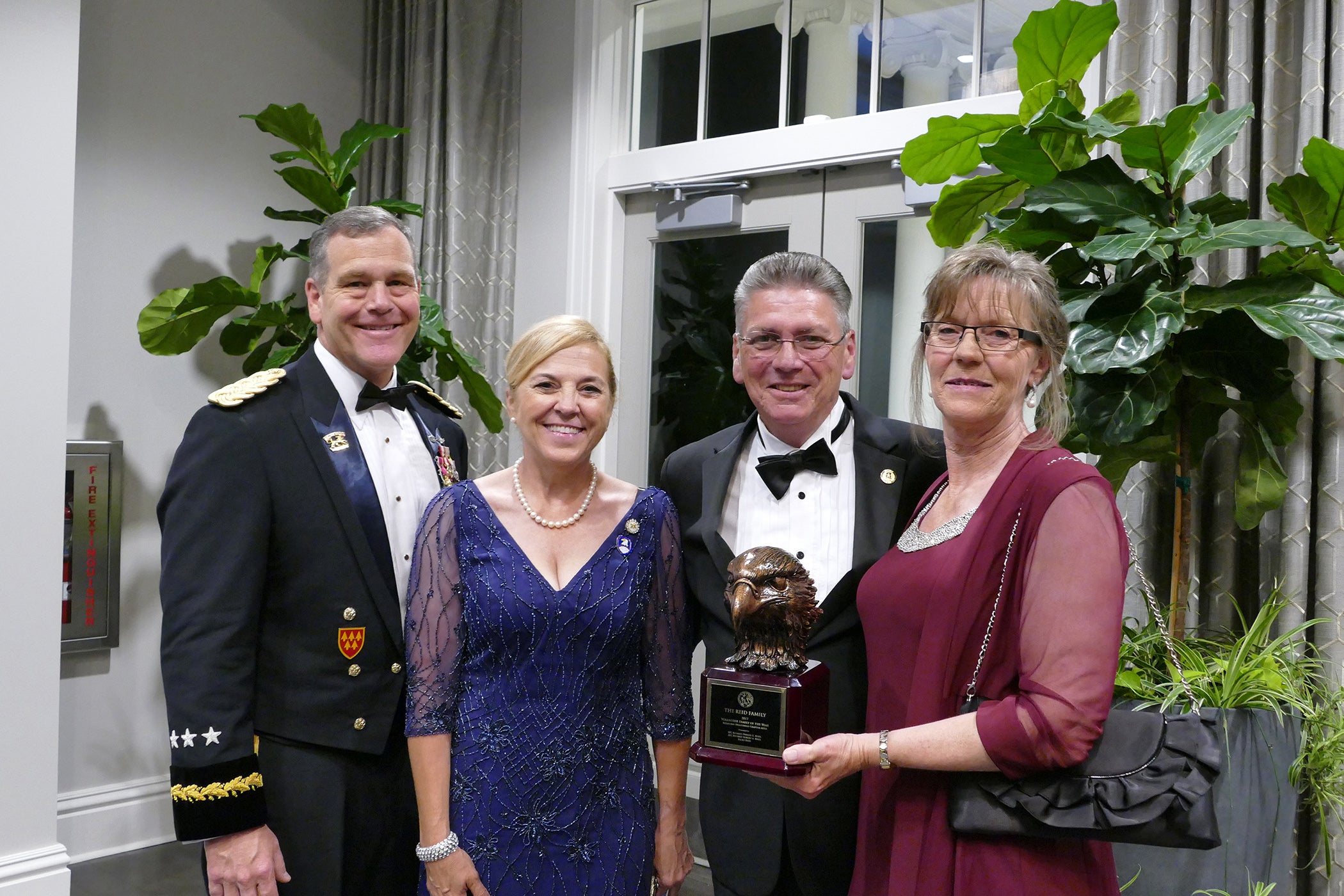 During the dinner, the Reids were named the Redstone-Huntsville Chapter Army Volunteer Family of the Year for 2017. (Photo by Kim Hanson)

“We are truly humbled and honored to receive this award in a community that supports so many causes,” Phillis said. “I am very proud to represent the U.S. Army Space and Missile Defense Command/Army Forces Strategic Command (USASMDC/ARSTRAT), and my husband was equally as proud to represent the Defense Commissary Agency here at Redstone. The Huntsville and Madison communities are the best I’ve lived in for supporting our military and veterans.”

The AUSA Volunteer Family of the Year Award recognizes an exceptional Army family whose dedicated volunteer service significantly contributes to improving the well-being of Army families and the local community. Nominees are submitted by AUSA chapters.

“We volunteer to support our community and because we are passionate about our military and our veterans,” Phillis said. “We are both retired from the Army and recognize the need to support these organizations, knowing we can make a difference in people’s lives. There are no words to express the overwhelming feeling that comes with being a volunteer when you dedicate yourself to something bigger than all of us.”

The Reids volunteer for several charitable events in the community supporting veterans, surviving family members and other community activities. Robert and Phillis are both currently Department of the Army civilians.

Phillis is the lead project coordinator for the
USASMDC/ARSTRAT hosted events honoring Survivor Outreach Services, or SOS, family members. She is responsible for the planning, coordination and execution of two events per year consisting of more than 65 surviving family members and more than 70 volunteers. Phillis is a committee member of the annual Black Tie Charity Ball that raises money for the Tut Fann State Veterans Home as well as organizing the annual Toys for Tots program at SMDC.

“We have been serving the community since we moved here in late 2009,” Phillis said. “We started volunteering as we met people associated with different organizations and became involved.”

They both volunteer each year for the flag line at the Cotton Row Run on Memorial Day supporting the Redstone Arsenal SOS and community awareness of fallen heroes and the Legacy 4 Korean War Veterans.

They both support other charitable organizations such as the League for Animal Welfare.

“If you are going to volunteer, make sure your whole heart and soul are into it,” Phillis said. “Volunteer for something you are passionate about and remember when you make that commitment, people depend on you to continue to provide support. The need is there, it will always be there.”