Soldiers from Romania, Ukraine, Albania and Hungary joined in learning how to load casualties onto each country’s tactical vehicles, including hot and cold loads onto helicopters. 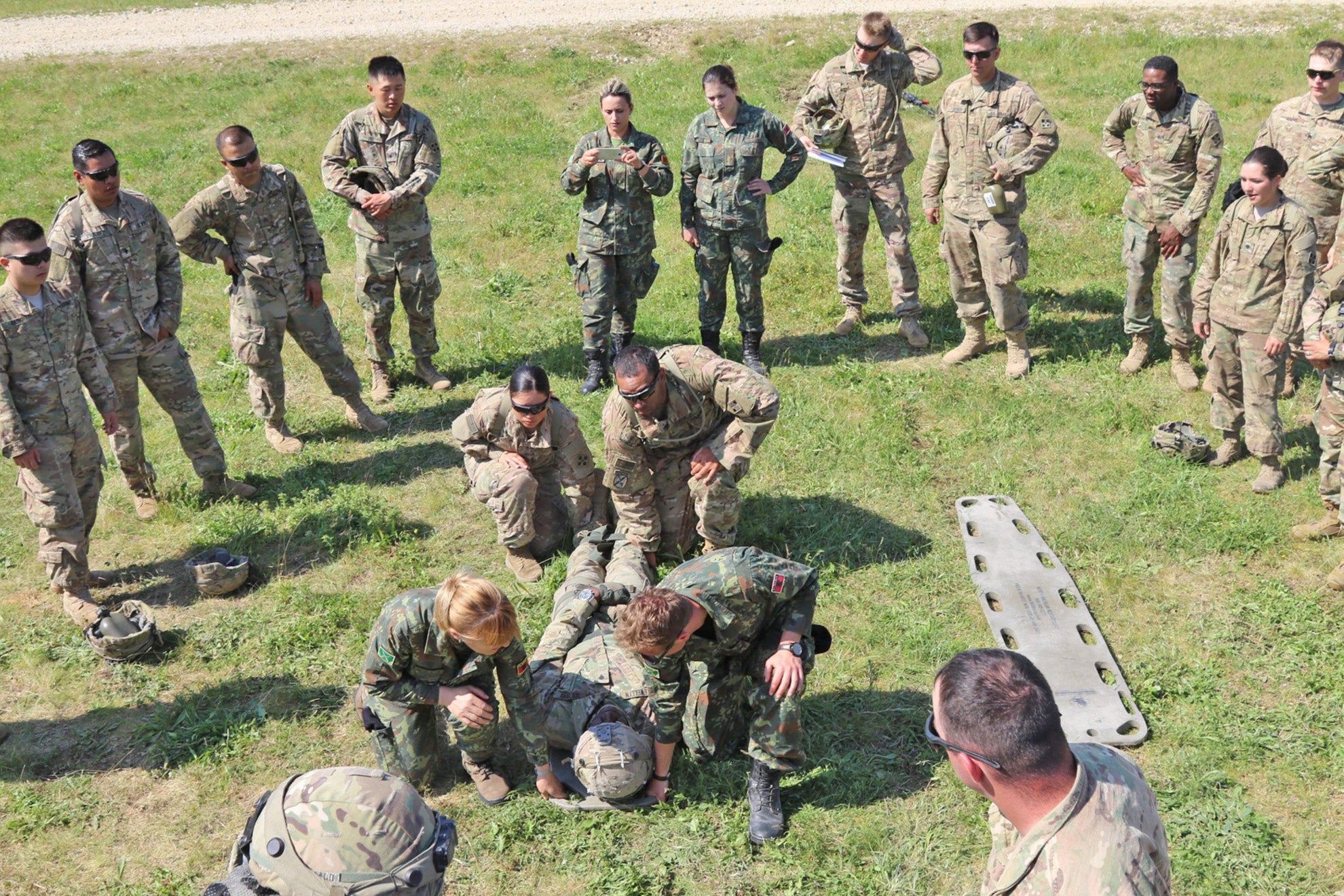 A group of soldiers from Albania, Hungary, Romania, Ukraine and the United States watch a demonstration on how to load a casualty onto an M113 medical evacuation vehicle during medevac training. (Photo by Staff Sgt. Ange Desinor)

“We are familiarizing ourselves and soldiers from other countries on our medevac capabilities,” said Sgt. 1st Class Christopher Howard, the senior combat medical specialist for Headquarters and Headquarters Company, 3rd Armored Brigade Combat Team.

Adding, “We are using the Black Hawk, an HH-60, which is used to medevac patients off the battlefield. We want all participants to be familiar with that assets before we go into the scenario-based part of the exercise.”

Other medical platforms used during the training were an M113 medical evacuation vehicle, and the Hungarians brought medevac vehicles as well.

“This was interesting,” said Romanian Sgt. 1st Class Sabina Molodoi of the 811th Infantry Battalion. “I have trained with U.S. soldiers before but never have trained with several other countries at once. We see how we all operate, and it’s very similar.”

The training detailed the process of casualty care from the battlefield to the hospital, where initial care is either self-aided or treated by a battle buddy. Combat medics provide first aid before a patient is medevaced to a Role 1 facility, such as a battalion aid station.

“A Role 1 is a facility that has a physician or a doctor and a medical team who provide medical care to stabilize patients. A Role 3 is hospital care,” said Howard.

“We get so used to doing things the 3rd ABCT way, so it’s a great thing that we can combine our personnel and assets for the mission. I’ve participated in Atlantic Resolve but never on this scale before. Too many times you hear about the combined training and don’t always get the unique experience,” said Howard.

As the 3rd ABCT leads more than 3,000 soldiers, of which about 2,100 are actually in the brigade, to the field for a nine-day force-on-force training scenario, the multinational contingent will have plenty of opportunities to test casualty care through defensive, offensive and stability operations.

“We will have that interoperability out there,” said Howard.

Adding, “When we receive casualties while we are in the scenario, we will be able to react without confusion no matter who or where the soldier is from.”