Whenever former Sgt. Aaron Carew had free time during the first of two deployments to Iraq, he binge-watched DVDs of TV programs. After discovering 24, the critically acclaimed counter-terrorism drama, “I knew I wanted to be a television writer,” said Carew, who had committed to the Army in 2002 as a high school senior. Today, the former logistics specialist who served for seven years is a staff writer for the Fox TV series Lethal Weapon, which premieres in the fall.

Former Cpl. Jeff Reyes was a criminal science major when he left college in 2004 to join the Army and “do my part.” Deployed to Ramadi, Iraq, in 2005 as a designated marksman and team leader, he earned a Purple Heart. After separating from the service in 2008, he chose the business side of filmmaking over criminal science. He has since worked in the art department/props for several films and is also a director, producer and videographer with his own production company, Echosworld Entertainment.

Retired Col. Lisa Costanza was on active duty with the Army and Army National Guard for 24 years and deployed to Kosovo and then in support of Operation Iraqi Freedom/Operation New Dawn, commanding the 224th Sustainment Brigade. For her second career she tapped into her first love, acting, and has landed roles in the acclaimed TV series Transparent and Her Only Living Son, a feature film by indie director Karyn Kusama.

Not every actor will be as successful as Robert Downey Jr., who raked in $80 million in 2015, according to Forbes magazine. And it may also be a stretch for an aspiring director to earn The Hollywood Reporter’s estimate of $250,000 minimum for a major feature film. Still, there’s money to be made in the entertainment industry on both sides of the camera, as many former soldiers have found out firsthand.

“This business is rough and tough on beginners and even rougher and tougher on older folks,” said Karen Kraft, a former first lieutenant and adjutant general in the Army Reserve and an award-winning writer, director and producer.

But the entertainment industry’s “attitude toward veterans is shifting,” said Kraft, whose “favorite credit” was working with comic book writer and editor Stan Lee on the 2004 Travel Channel special Marvel Superheroes’ Guide to New York City. “It’s a good time to be a veteran in Hollywood.”

Begin at the Beginning
Former soldiers seeking to break into show biz can hope to be as lucky as Mark Valley, a 1987 U.S. Military Academy graduate who was serving in Germany when his rugged good looks caught the attention of a Berlin talent agent. Valley, a former first lieutenant whose five years of service included an Operation Desert Storm deployment, went almost directly from the Army to soap opera acting gigs and from there, leading roles in films and TV shows including ABC’s Boston Legal, Fox TV’s Fringe, NBC’s Harry’s Law and Bravo’s Girlfriends’ Guide to Divorce.

“Everyone wants to be the next big actor, director or writer,” said Kraft, who left the Army during Clinton administration-era downsizing and enrolled in a graduate film program at American University in Washington, D.C. “But even for the most talented, it takes years to hone your craft.” She advises those seeking work in the entertainment industry to “read everything on the career you are pursuing. And remember, you are starting from the bottom in a new career so be polite, patient and persistent—and ask a lot of questions.”

Carew finished his undergraduate degree after leaving the Army and then earned an MFA from the University of Southern California’s School of Cinematic Arts-Peter Stark Producing Program. He interned with Overbrook Entertainment, a production company co-founded by actor Will Smith, and others before collecting professional credits including assisting director Michael Mann on the 2015 feature film Blackhat. Carew is also teaching online film courses for Hopkinsville Community College, Ky.

Costanza started acting when she was 17, and worked steadily enough to earn membership in the Screen Actors Guild and American Federation of Radio and Television Artists in 1978. Then she went to college and subsequently joined the California Army National Guard and then the Regular Army. “So I have been an actress a lot longer” than a soldier, Costanza said, adding that her military retirement pay “allows me to pursue my acting career.”

It’s Also Who You Know
As Carew “started to climb the ladder in the entertainment business, I wanted to find fellow veterans” in the industry, he said. He discovered Veterans in Film & Television (VFT), an educational and networking organization for current and former service members.

VFT was co-founded in 2012 by Mike Dowling, an actor and former Marine Corps working dog handler, and Army veteran Kyle Hausmann-Stokes. A grandson and nephew of military veterans, Hausmann-Stokes joined the Army after graduating from high school. He served for three years and separated in 2004 to go to film school, but was recalled to active duty in 2006 as part of the Surge. He served about two additional years including a yearlong deployment to Iraq.

After separating as a staff sergeant, he returned to the University of Southern California’s film school.

About a year after graduating, he met Dowling, who’s also an Iraq War combat vet. “When we determined that there was not an organization that united other vets in this space, we decided to create one,” Hausmann-Stokes said. The mission of VFT is to provide a platform for current and former military members working in the film and television industry to network with each other as well as with industry leaders. Kraft became a founding board member after hearing a presentation about the new group. 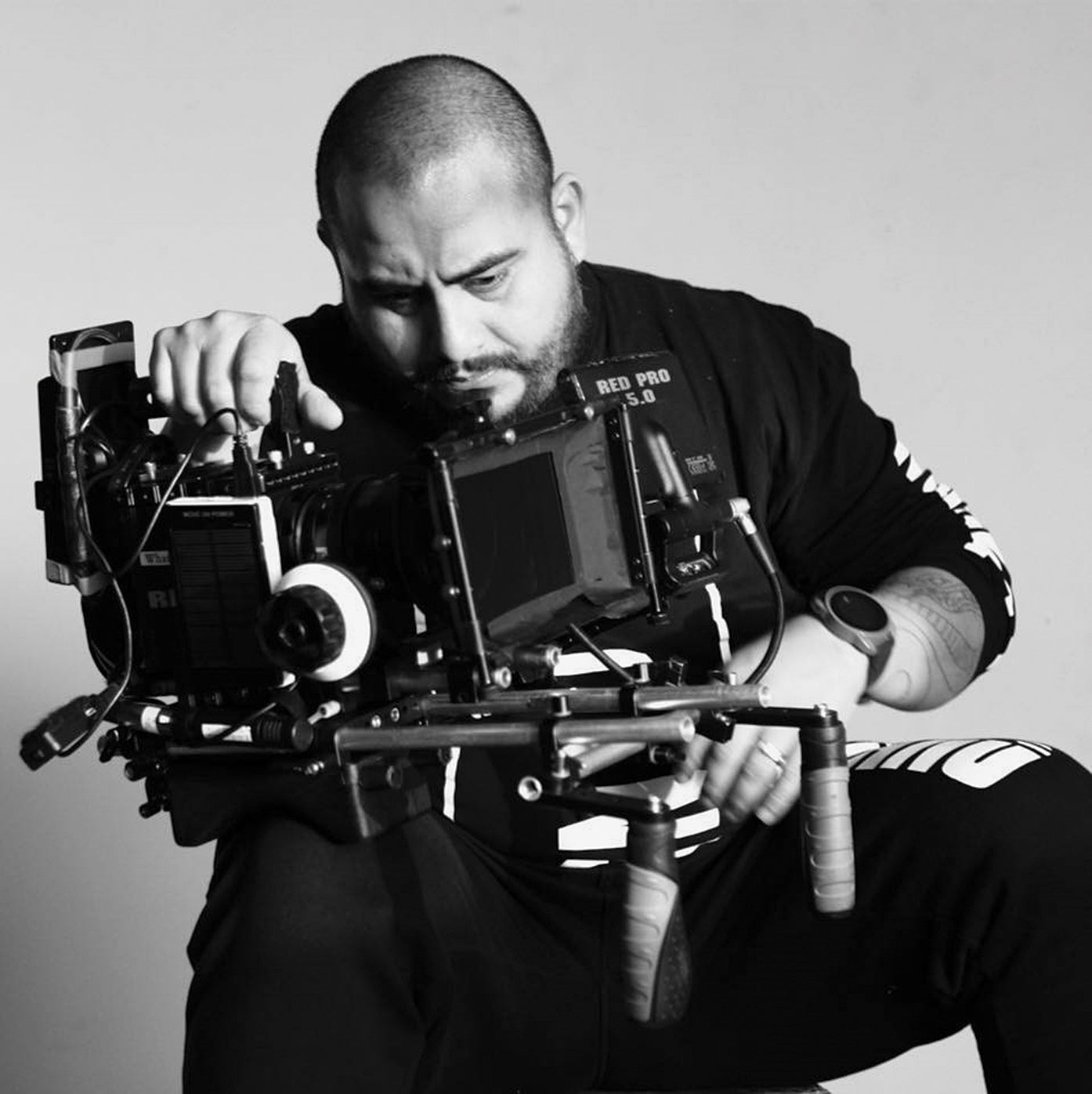 Jeff Reyes, a former corporal, makes a camera adjustment during the shooting of a music video.
(Credit: Ciley Carrington)

VFT is a 501(c)(3) based in Los Angeles. It has a chapter in New York City and also plans to establish a presence in Atlanta and Washington, D.C., all through volunteer efforts. It has forged partnerships with various casting agencies, directors and others who are looking to fill positions on both sides of the camera. The organization has grown, Hausmann-Stokes said, to an “endless amount of enthusiastic member volunteers [and] thousands of members across the country, dozens of events with celebrities and studios, hundreds of vets hired and cast in the industry, and too many other random and awesome things to mention.”

Hausmann-Stokes stepped back from VFT in 2015 to concentrate on his directing career. He has directed national TV spots for brands including Dunkin’ Donuts and Audi, and recently was in Lisbon shooting a commercial for Bayer. He also has won three Telly Awards—“like Oscars, for commercials” and other visual content—for veteran-related public service announcements.

Seek Opportunities
Membership in VFT, which is free for current and former service members, provides opportunities to connect with mentors such as Tucker Smallwood, a television news director in Baltimore who was drafted into the Army in 1967. After serving in the Vietnam War, Smallwood resigned his first lieutenant commission in 1970 and moved to New York to study acting.

Smallwood thought learning about acting would help him become a better director, but “I fell in love with the process,” he said. “I worked constantly” as an actor for 10 years before post-traumatic stress disorder “began unraveling my life.”

After receiving treatment, Smallwood moved to Los Angeles in 1991. He’s had featured roles in Broadway productions and regional theater; and guest spots in TV shows including The X-Files, Seinfeld, Frasier, Curb Your Enthusiasm, Friends, Malcolm in the Middle and My Name is Earl.

“When I finally asked for and received help, I pledged to advocate for treatment to other veterans troubled by their service,” Smallwood said. So along with sharing advice about the entertainment industry, he has spoken nationally about the need for counseling for the veteran population.

‘A Rough and Treacherous World’
“It’s pretty well-known that show business can be a rough and treacherous world,” said Frank Sharp, who enlisted in the Army in 1994 after spending the previous seven years in Los Angeles pursuing an acting career. “The opportunity to help people avoid the sorts of errors I made … is golden.” Sharp served in the 3rd Ranger Battalion before separating as a specialist in 1999 and returning to California. After about three years, he said, “the on-camera end of my work had slowed to practically nothing, but I had the opportunity to start full time in post-production.”

“I worked on more than 100 shows as an assistant, coordinator and supervisor, then began doing background and featured voices” for TV shows and movies, Sharp said. “I finally had a career.”

Sharp also has written screenplays, including Lone Rider, a 2008 made-for-TV Western starring Lou Diamond Phillips and Stacy Keach; and the 2015 film It Had To Be You. He works as a voice actor and is a consulting producer for projects including a film in development called Wyoming Sky.

“Veterans tend to have the kind of skill set that is necessary to succeed in Hollywood, but those skills need honing to specific purposes,” Sharp said.

Kraft said companies such as Disney, DreamWorks, NBC and Lionsgate, among others, have initiatives to hire veterans. More opportunities for show biz seekers can be found in organizations such as the Writers Guild Foundation’s Veterans Writing Project, which pairs veterans interested in the industry with professional writer-mentors with military backgrounds. Katie Buckland, the foundation’s executive director, has described the project as a job training program for current and former service members “who want to work in this industry.”

And Sharp, among others, thinks the entertainment industry is a good fit for soldiers.

“I got far more out of the Army than the Army could have ever gotten out of me,” he said. “The Army prepared me both professionally and personally for the rest of my life. Any success I’ve enjoyed since … is directly linked to my time in service.”