No Need For Speed: Slow and Steady Are Hallmarks of Army Snipers

Ask the U.S. Army Sniper School’s master trainer what it takes to be a great sniper, and he doesn’t immediately mention marksmanship.

“You have to be confident, committed, and cool under pressure,” said Sgt. 1st Class Matthew Fox.

On the forward edge of the battle space where snipers usually ply their trade, “you don’t have time to call back to headquarters. You have to make the decision on the spot.”

Each year, several hundred soldiers come to the Fort Benning, Ga., school from the infantry, cavalry scout and special operations communities. Training them to become snipers falls to the 18 seasoned instructors on the school’s staff.

Sgt. 1st Class Matthew Hammond, the school’s first sergeant, confirms that marksmanship is only about 20 percent of a sniper’s skill set.

“The other 80 percent is stalking, camouflage and concealment, observing, collecting and reporting battlefield data as the eyes and ears of the commander,” he said. “That’s just as important, if not more important, than long-range precision fire.”

For the observational aspect of the profession, “the most difficult thing to master is nerves,” said Staff Sgt. Beau Rushing, an instructor. “Keep calm at all times and don’t freak out to make sure you can get in, collect your intel, and get out without being detected.”

Think Three Steps Ahead
On the marksmanship side of the job, disciplined thinking is every bit as crucial as steady hands and a clear eye. “You can’t just see the enemy and shoot him,” said Staff Sgt. Guillermo Roman, the school’s team sergeant. Instead, “It’s: Can I shoot him? When can I shoot him? What will happen after I shoot him? What are the repercussions of shooting him now versus waiting another hour? You always have to be thinking three steps ahead,” Roman said.

Then there’s the emotional steel required to sight down on and kill a person. 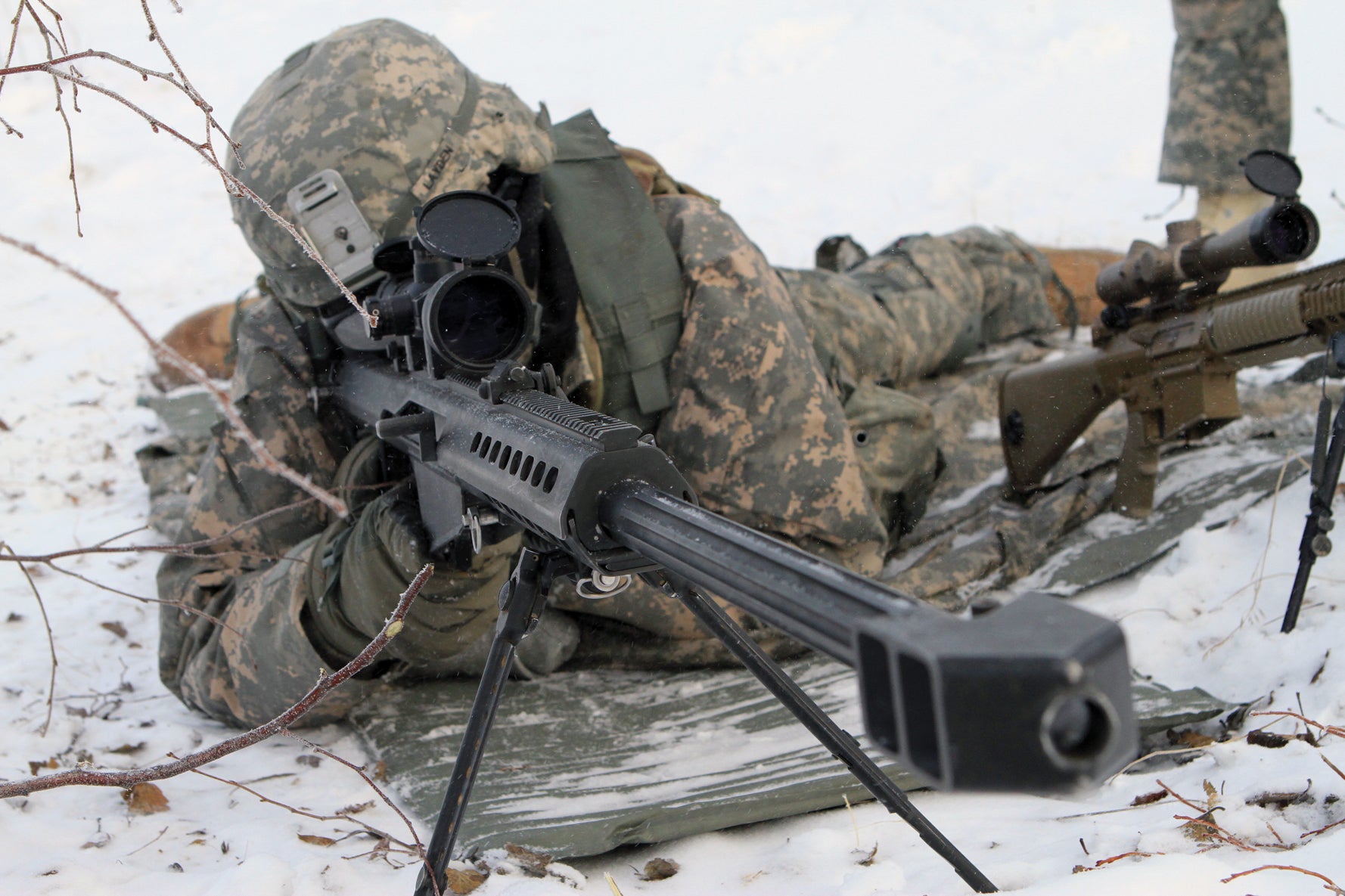 The bottom line? “You definitely have to have a solid mental state to come into this world,” Hammond said.

“That’s not a lot of time to hone so many different skill sets,” said Fox. “We have 75 lesson plans covering a wide range of things,” including advanced camouflage and concealment, countertracking, range estimation, target detection, sniper deployment, long-range marksmanship and target engagement.

The U.S. Army is buying a new rifle for its long-range sharpshooters.

Heckler & Koch recently confirmed that a contract has been finalized to provide the Army with a modified version of its Gewehr-28 Designated Marksman Rifle as a shorter, lighter replacement for the M110 Semi-Automatic Sniper System.

Service officials have offered few details about what’s being called the Compact Semi-Automatic Sniper System, or CSASS. But under the contract, potentially worth $44.5 million, the Army could order up to 3,643 weapons over two years.

Each phase builds on the previous one; soldiers who fail any one phase are out altogether. They are allowed to try again, and there’s no restriction on how long they must wait before returning to Sniper School. However, they must start all over again, regardless of which phase they failed.

“A sniper has to show proficiency in fieldcraft” before moving on to marksmanship, Fox said. “And then he can be the best shot in the world, but that doesn’t really matter if he can’t get to his final firing position without being compromised.”

That high bar keeps the school’s average attrition rate at 56 percent. Still, about 200 soldiers make it to the finish line each year to emerge as fully qualified U.S. Army snipers.

“We teach them techniques to better conceal themselves from trained observers, which sounds easy,” Fox said. But some of the instructors looking for them “are the absolute best observers in the world.”

“We’re trained to find things out of the norm, things that just don’t belong,” Roman said. “If somebody doesn’t cover the lens on his scope, we can see that from 600 meters away.”

“We’ll bust people on buttons being too dark—just quarter-sized buttons, that small, round circle,” said Rushing. “Almost nothing in this world is naturally black. So anything you have on that’s black, you need to cover it with something, like vegetation.”

Students may inadvertently put their vegetative cover on upside down, not realizing the underside is lighter than the topside that’s been sitting in direct sunlight. Or they may fail to replenish their cut vegetation before it starts to wither, which also makes it stand out.

Fox said the job requires a lot of patience, which can prove difficult for some students, most of whom come from an infantry community that tends to operate at slightly higher speeds.

“They have a little more of that dynamic, direct-action personality,” he said with a laugh. “We have to instill tactical patience in them, that need to be slow and methodical.”

The instructors also stress that fieldcraft is not designed simply to pave the way for getting into position for a shot.

“Observation is one of the biggest things you’re going to do in the sniper community nowadays,” Rushing said. “Afghan-istan, Iraq—nine times out of 10, you’re not pulling your trigger. You’re collecting battlefield intel: drawing range cards, sketches, patterns of live movement.” 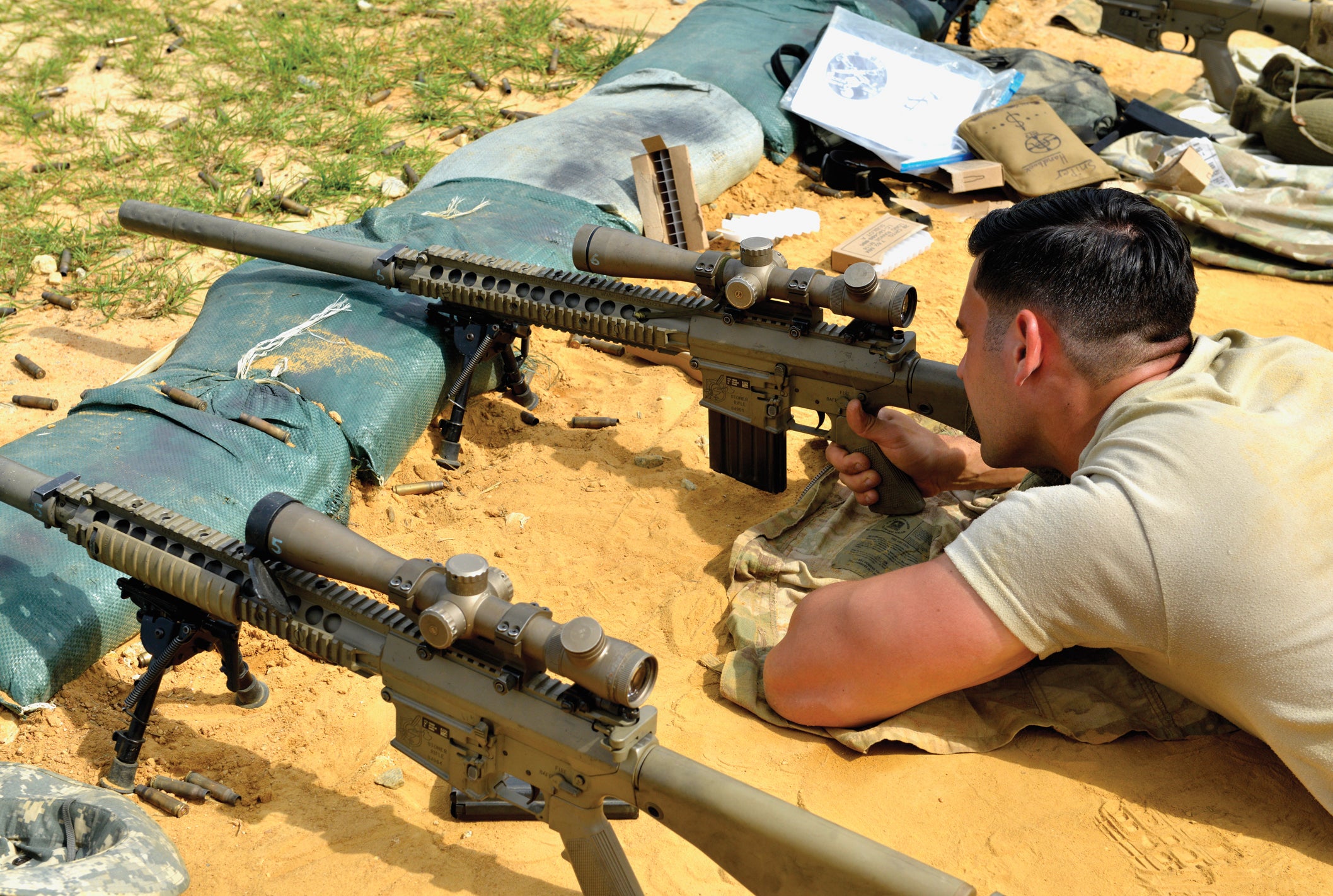 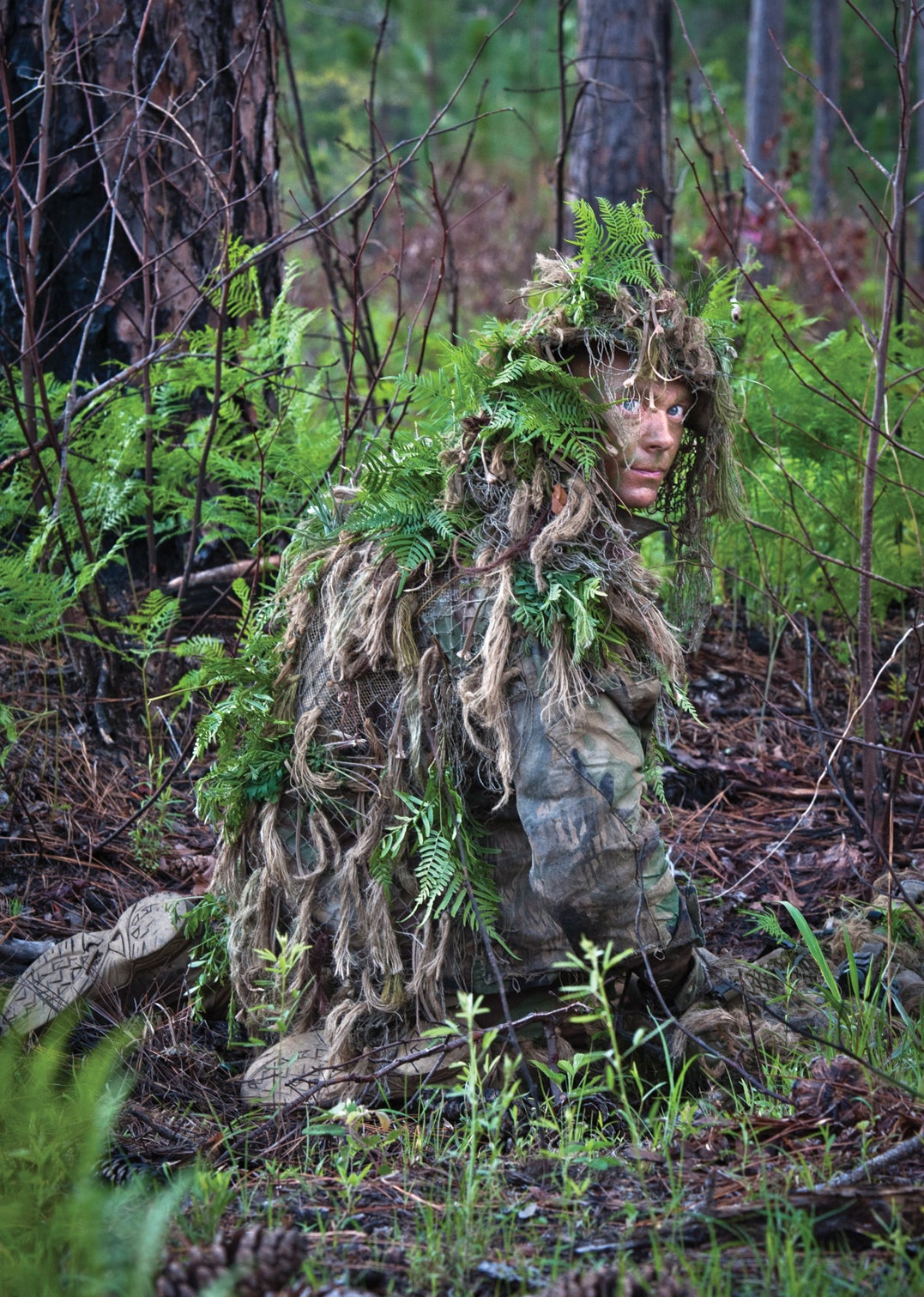 “It sounds boring, but what you’re sending back to your higher-ups tells your guys going into the fight, ‘Hey, this is what you’re getting in that village,’ so they’re not going in blind. That’s a very, very big deal.”

“The fieldcraft is what makes a sniper,” Hammond added. “Otherwise, he’s just a trained marksman.”

Sighting Downrange
That is not to say marksmanship is neglected. Far from it: Up to 53,000 rounds are expended during each seven-week course, and one of the prerequisites to attend the school is being qualified as expert on the M4 rifle.

“Fundamentals are fundamentals,” said Hammond, who had previously been assigned as an instructor and is now back for a second tour as the school’s first sergeant. “If you have a good grasp of basic rifle marksmanship fundamentals, it translates over into our world very well.”

That said, the fundamentals are just a launching pad for the sniper art. “When you introduce a scope, most people think, well, I can see a target, I can shoot a target,” he said. “It doesn’t really work that way. Any weakness you have will definitely show when you jump on a scope. Every millimeter you’re off is exaggerated downrange.”

Rushing explained that when “you start pushing out to 800 meters, just your breathing or your trigger squeeze can throw off your rounds by 8 to 10 inches—which is kind of a huge deal in our community.”

One of the more specialized supporting skills for the marksmanship aspect of the job is being good at math. “We have equations for everything,” Roman said. “Each of these guys carries two calculators for a reason: Everything they do, some kind of math is involved.”

When shooting a bullet downrange at long distances, “every variable comes into play,” Hammond noted, including wind, bullet spin drift, and even the rotation of the Earth.

The instructors say most students pick up this aspect of the craft fairly quickly. Still, they’re given cheat sheets. “And we tell them to carry two pens, because they’ll be writing and using their calculators like madmen here,” Rushing said.

The Army is rethinking how its snipers are organized, according to Sgt. 1st Class Matthew Fox, master trainer at the U.S. Army Sniper School at Fort Benning, Ga.

All infantry battalions have designated sniper sections, but the Army also sends soldiers to the school from the 19D cavalry scout and 18 series Special Forces MOSs.

Yet those units have no designated sniper billets, Fox said.

“If a 19 Delta comes through the school and graduates, he gets a certificate of training, but he doesn’t get” the official sniper additional skill identifier, Fox said.

So when that soldier returns to his cavalry squadron, he can be employed in a sniper role in the field—but only unofficially.

“Probably within the next year or so, you’ll see” the sniper additional skill identifier awarded to other MOSs other than 11B infantryman, he said.

Put to the Test
Everything students learn during the first two phases of the sniper course is put to the test in the third, or operational, phase.

“They have to understand op orders, troop-leading procedures, sniper employment, how the composition of a sniper team can be employed to support the commander’s intent and accomplish the mission,” Fox said. “This is where the tactical aspects come in.”

It all comes to a head in a 72-hour field training exercise that involves a live scenario with role-players in a mock village. “They have to be able to pick out, for example, who the key leaders in the village are, what the dynamic is, the baseline pattern of life inside the village, things like that,” Fox said.

An important aspect of the course is that the nature of the work, done in very small teams, leads snipers to forge incredibly close bonds.

“You become very tight-knit,” Fox said. “The same thing can happen in infantry platoons, but I think with snipers it’s even a bit stronger, because we’re forward of everybody else. You’re in a little bit more danger. You know your friendlies are 35, 40 minutes behind you and if something goes wrong, you have to rely on each other to get out of it. There’s no immediate backup.”

As the course rolls on, there’s one more facet of being a sniper that the instructors seek to hone in their charges: the hungry hunter mentality.

If Cpl. Levi Schmitt, a recent graduate of the course, is any example, the staff is doing well on that score. When asked why he wants to be a sniper, Schmitt, with the 3rd Battalion, 75th Ranger Regiment at Fort Benning, replied: “I just want to eliminate all the targets my command gives me.”

When that exchange is later recounted to Fox, he can’t hide a smile. “That’s something we definitely try to instill in these guys,” he said. “That’s what it’s all about. Get in position, hit the target without being seen, get out—and then get ready to do it all over again.”