They are silent, stoic sentinels at the corners of the wire. A new weapons system is providing persistent surveillance, early warning and lethality for an enduring and successful Middle East peacekeeping mission.

The introduction of the containerized weapons system to the Multinational Force and Observers’ North Camp is a benchmark for this independent international organization, which was jointly created by Egypt and Israel and charged with peacekeeping responsibilities on the Sinai Peninsula, Egypt. Acquisition of these remotely operated weapons platforms is another step taken by Task Force Sinai, the U.S. contingent, toward increasing the security level at the camp. Currently, few of these expeditionary systems are used by DoD, but they are proving their value in Sinai by increasing protection to soldiers and civilians.

The Multinational Force and Observers (MFO)  has steadily improved protection as the Egyptian Armed Forces have fought against a local insurgency in the North Sinai over the past several years. Since 2011, the insurgency has drawn strength from the region’s disaffected Bedouin tribes and is focused on the redress of grievances, old and new.

There is growing concern that this local insurgency can and will boil into another outlet for global jihad. This concern solidified when Ansar Bayt al-Maqdis, a local Islamist insurgency, reflagged to Wilayat Sinai in 2014. The shift was assessed primarily as a means to gain financial aid. Though bolstered with weapons and money, Wilayat Sinai still conducted operations primarily against local Egyptian security force targets in Northern Sinai. In early to mid-2015, the group began showing behaviors and propaganda more closely aligned with the Salafist motivations of the Islamic State group.

Westerners Targeted
Where Ansar Bayt al-Maqdis was careful to target Egyptian security forces, the series of attacks in 2015 preyed on locals helping the government and even targeted Westerners in Egypt. The escalations increased the Egyptian government’s aggressive counterterrorism response; so far, the Wilayat Sinai militants have been contained to the northeastern Sinai.

However, it is in North Camp’s backyard where fights between Egyptian security forces and militants regularly play out. The MFO is not currently a target, yet collateral damage from either side is a real and growing concern.

The need to protect soldiers and civilians is driving change. The nonpermissive environment where soldiers cannot roam is being addressed through a series of force-protection upgrades and equipment fielding combined with substantial changes in the organization’s force array. Over the past year, these changes have included the addition of the MFO-integrated Counter Rocket, Artillery Mortar systems, Rapid Aerostat Initial Deployment cameras and MRAP all-terrain vehicles.

The containerized weapons system has driven further changes since it was acquired earlier this year. The combination of these assets has changed the Force Operations Center from functioning as a routine logistics authority to something that emulates Regional Command South’s Combined Joint Operations Center in Kandahar Province, Afghanistan.

In Egypt, commanders and staff officers at various echelons have pooled their collective knowledge from previous expeditions to develop a refined and comprehensive defense plan for the MFO’s North Camp enabled by the integration of these assets. While refining engagement-area development, the MFO emplaced the containerized weapons system as a direct fire system and developed techniques to enhance its advantages. The system lifts weapons to a position of dominance, and even more accurate fields of fire are gained when the shipping container holding the system is stacked atop other cargo containers.

There are a number of options to power the containerized weapons system after it is emplaced. The container has a built-in diesel generator that charges the system’s batteries and can cycle for 24 hours before refueling is required. In sunny locations such as Egypt, solar panels are more than adequate to meet power demands. But the best option is a stable power supply from existing local infrastructure or even shore power, where possible. Shore power is used in Egypt. 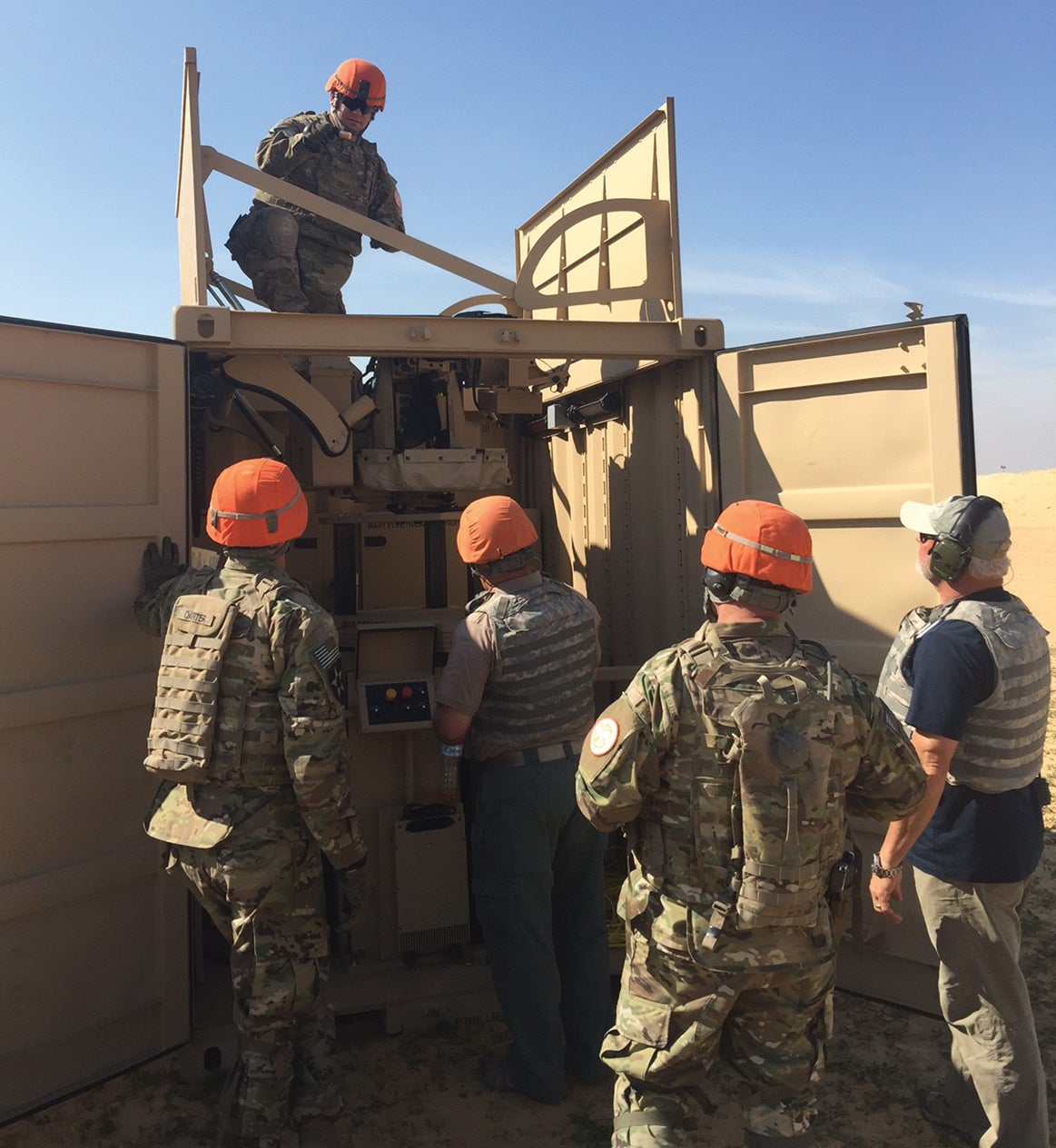 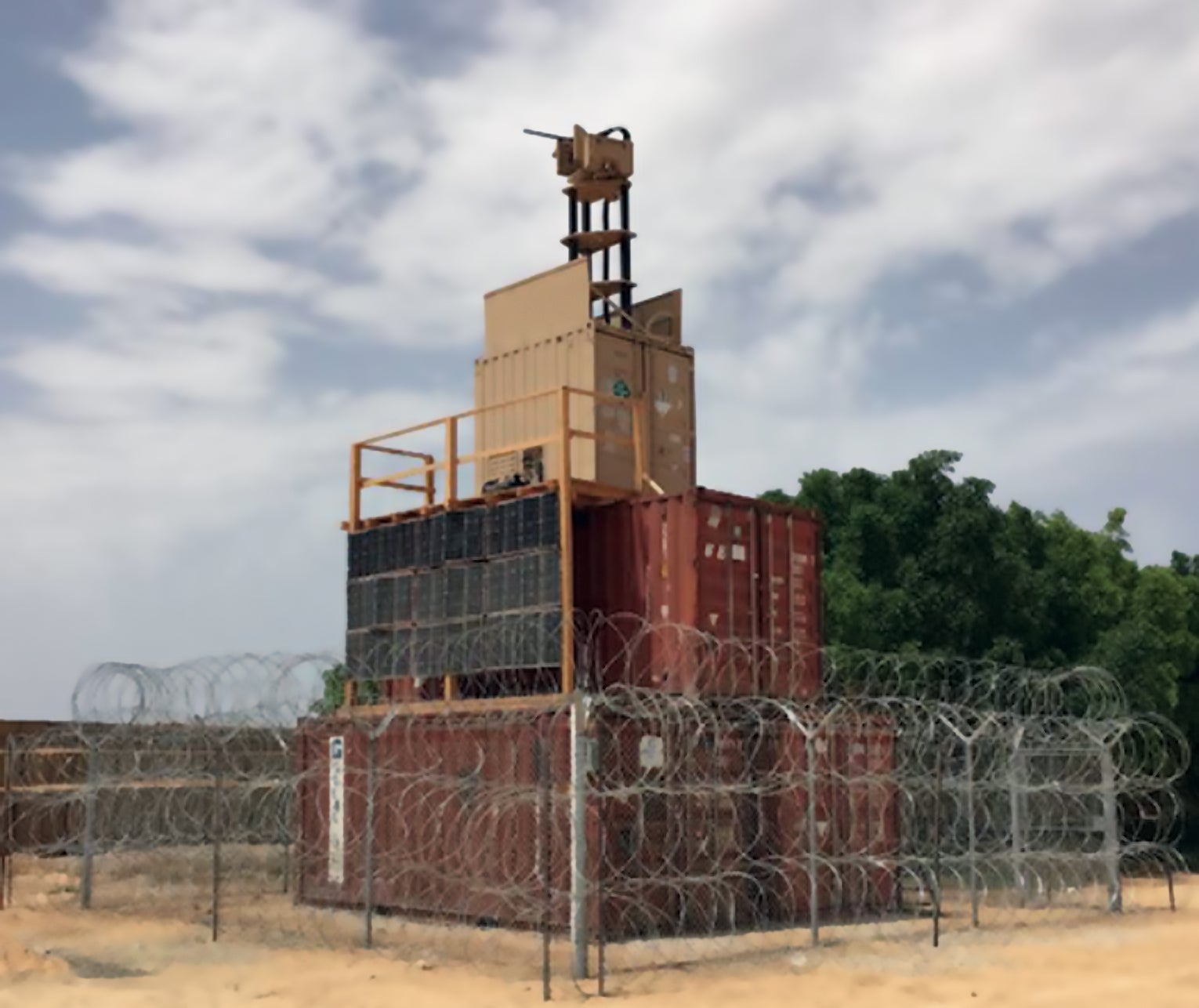 Elegantly Simple
The containerized weapons system is elegantly simple. It is essentially a Kongsberg Common Remotely Operated Weapon Station (CROWS), which is stored in an 8-foot International Standards Organization shipping container and operated from a separate location significantly farther away. The platform can be weaponized with a number of armaments up to and including advanced anti-tank weapons systems.

The remote operation of the platform is the biggest boon to the MFO. The containerized weapons system can be emplaced and moved with moderate ease. It provides a commander with the flexibility to develop a defense that can adapt to changes in the enemy situation. It lends itself to defense in depth and provides critical early warning sensors. The system camera’s thermal imagery can detect threats at distances that a soldier in a tower at night simply cannot.

Training soldiers is an important aspect of equipment fielding. The field service representatives from Invariant Corp., which provides the software, and the Army’s Tank-automotive and Armaments Command Life Cycle Management Command can train service members who are unfamiliar with the system through a 40-hour course that is recorded in their military personnel files.

Commanders must also account for other tasks such as regular weapons maintenance and reloading the system for a defensive battle drill. The system’s 360-degree situational awareness computer can be networked to the force operations center or other Mission Command nodes, providing battle staff with a greater understanding of the common operating picture. Soldiers already trained on CROWS from previous deployments, or trained on the Stryker remote weapon station, will find the system and its controls easy to learn.

While the defense of North Camp will require constant refinement, the integration of a containerized weapons system is making the right move at the right time. Its capabilities have helped make the MFO’s largest installation a harder target.