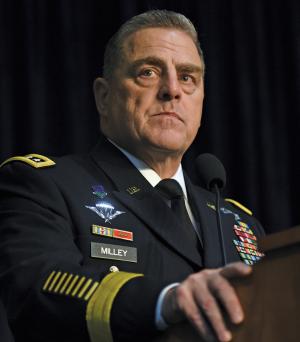 Gen. Mark A. Milley marks his third year as chief of staff of the U.S. Army with a continued warning that the world’s most powerful land force needs to change. The global situation facing the U.S. and its allies is fraught with more risk today than at any time since World War II, he says. While he does not suggest that war is inevitable, he wants America’s Army to be prepared for what could be fierce fighting on a future battlefield.

It is a tough message but one he says is extremely important.

The graduate of Princeton and Columbia universities is a student of history, with a deep understanding of the global players that might pose a threat to U.S. interests, the fundamental changes underway in the world order, and how the Army should respond.

As the Army’s top officer, Milley is charged with current readiness while simultaneously laying the foundation for a future, modern, lethal force. It must be able to respond today, if needed, while also preparing itself for wars 20 years down the road. The way ahead, he says, is significantly more complex than what the Army has trained for since 9/11. He also cautions that preparations for war will no longer be defined by a predictable patch chart and a cookie-cutter train-up for a fight against a known enemy in familiar territory.

“For me the question is, readiness for what?” Milley said in an interview, suggesting soldiers must stay ready to fight today’s war against terrorists while at the same time being prepared for a conflict on a much larger scale. “The chief of staff of the Army has to figure out the future fight, what the tasks will be, the needs and conditions,” he said. “No one’s going to get it right, but we need to be less wrong than the enemy.”

In the current strategic environment, competitors such as Russia and China are asserting their military and economic prowess on the international stage in increasingly aggressive ways, while the U.S. military is also confronting regional threats from troubling adversaries like North Korea, Iran, and nonstate terrorists who wage violence around the world to advance their ideologies, he said.

At a well-attended speech this summer at the National Press Club in Washington, D.C., Milley said the post-World War II world order where the U.S. had a central leadership position “is under intense stress today from revolutionaries and terrorists and guerillas who don’t like the rules of the road that were written and want to revise those rules of the road.” This challenges a global balance set seven decades ago, a balance that “prevented a great-power war similar to what occurred in the first half of the last century,” Milley said.

A potential war with North Korea “would be horrific” and “tragic on an unbelievable scale” with immense levels of violence, Milley told a Senate committee. He has branded North Korea as a rogue state, and said it represents the “single most dangerous threat facing the international community.” Milley recognizes the importance of diplomatic efforts but has warned that time is running out.

Readiness for today’s fight and into the next five to six years will be achieved with legacy equipment that’s been upgraded over the past 20 years, Milley said in the interview. Equipment modernization, such as development of a new tank, takes time and has been held back in part by a lack of regular funding. The last significant modernization took place in the 1980s when the Army rolled out what Milley called the Big Five: the Bradley Fighting Vehicle, the M1 Abrams tank, the UH-60 Black Hawk and AH-64 Apache helicopters, and the Patriot Missile System. Production and fielding of these systems, all of which continue to be the workhorses of the Army, had a long lead time, and any future modernization initiatives will also take decades.

“We have to do the legwork and set the foundation for organizational equipment and doctrine that would become real in 10 to 20 years,” Milley said. “Each chief of staff has incrementally improved each of those Big Five systems,” he said, pointing to Abrams tank upgrades over the years that have improved its electrical system, powertrain, suspension, transmission, primary and secondary guns, speed and fuel capacity. “The M1 of today is not the same as the one rolled out in 1980.”

None of this will be possible, however, without full and predictable funding from Congress.

With the Army being the largest piece of the U.S. military’s joint global force, Milley said as of mid-2017 there were 180,000 soldiers committed in some 140 countries from the Army’s Regular, Reserve and National Guard components. While most of those engaged in combat are in Iraq, Afghanistan and Syria, soldiers elsewhere are engaged in tasks that contribute to maintaining the stability around the world that’s based on the system of rules established seven decades ago. “That’s 20 percent or so of the Army as a whole,” he said, “but 40 percent of the Regular Army who shoulder the majority of that demand. Those are steady-state operations today, without a major, regional conflict.”

“Based on the tasks that are required, I believe we need a larger Army,” he said, offering the views of his fellow service chiefs who “also think the same” of their forces. “It’s not some arbitrary number. We’ve done the analysis, and we think we need to be bigger. And we need to be stronger and more capable.”

Much of Milley’s vision for Army modernization and the way forward in the future of conflict, he said, will depend on the outcome of a broad strategic review directed by Defense Secretary Jim Mattis, a report with input from each of the services that is expected to be completed later this year.

However, there is certainty in Milley’s mind that future wars will be fought door to door in cities. He predicts that by midcentury most of the world’s population will have gravitated toward high-density urban areas, and Mosul in Iraq offers a preview to the future operating environment.

Such a scenario would significantly impact things like the size of the Army, command and control, movement through streets, and weapons systems. “What’s the optimal width of a vehicle? At what angles should vehicle-mounted guns elevate? What are the limitations of radio communications? What’s the explosive power of rockets fired, and the effects of the back blast? What are the impacts on the required skills and attributes of our leaders, on our tactics and doctrine?” he questioned. “The Army is optimized to fight in the open country of Northern Europe or the deserts of the Middle East. All of those variables adjust when the terrain shifts to highly dense urban areas. This requires significant and fundamental change to our Army.”

The continuing, rapid emergence of and technological change in robotics, artificial intelligence and unmanned vehicles in the commercial sector and in some battlefield settings have ushered in a new complexity in each domain. Eventually, Milley predicted, “we will see the introduction of wide-scale robotics in ground combat.”

Unit formations are maintaining readiness for any contingency, and for Milley that means making sure soldiers are secure in knowing their families are taken care of. While the Navy and Air Force are “platform-centered,” he said, people are the centerpiece of the Army, more so now than ever before.

“In World War II, only 10 percent of soldiers were married and the average age was 19 to 20. Today, the Army is 15 percent female, 60 percent married, with one or two children, and the average age is 23,” Milley said. “For most normal humans, the highest priority is kids.”

Taking care of soldiers’ families is basic common sense for Milley, a leader who recognizes that “priorities today are different. If you want soldiers to stay laser-focused on their military task, which is move, shoot and communicate, then we need to reassure them that their personal priority is taken care of.”

Milley also intends to tackle the pool of nondeployable soldiers, those who are unable to deploy due to a variety of reasons, mostly medical. Across all three components, he said, a division’s worth of soldiers is not deployable. Many are “hard down, they’re not going to recover, they have to be moved out and into the veteran system,” Milley said.

Another set of soldiers is down for the count temporarily, those who can’t deploy within 30 days due to injuries that occur in a line of work that sees a regular rate of physical injury. “We can do better at both prevention and recovery,” Milley said. There is room for improvement in reducing the wide pool of nondeployable soldiers, he added.

“We have an existing Army, consisting of the Regular Army, the National Guard, the U.S. Army Reserve, and I have an obligation to the president, to Congress, to the American people to make sure that this force is at a level of readiness that can deliver options for the president to use in the event of conflict,” he said in an Army article.