Be Prepared When Called: Soldiers Must Train Hard, Get Educated, Stay Ready

Be Prepared When Called: Soldiers Must Train Hard, Get Educated, Stay Ready 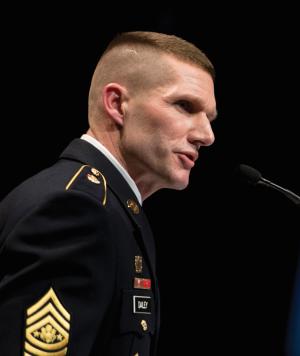 Sgt. Maj. of the Army Daniel A. Dailey has a simple message for soldiers as the Army returns to full-spectrum operations requiring self-sustainment on the battlefield: Be deployable, be good at what you do and stay ready to do it.

Dailey, the 15th sergeant major of the Army, joins Army Chief of Staff Gen. Mark A. Milley in making readiness the Army’s top priority. For Dailey, this means beating the drum for an Army in which soldiers adhere to standards and are highly disciplined top performers.

“It’s not that we haven’t been focused on [readiness] but we’ve been focused on a different fight, the counterinsurgency fight and what it was to drive success in the Middle East,” Dailey said. “The Army is a much bigger component than just that to the Defense Department, and we have to be prepared to fight and win our nation’s wars if called to do so.”

Counterinsurgency remains valuable, Dailey said, but soldiers face a world where they’ll need different skills for different threats and they’ll operate in new locations. They will rely on small-unit leaders—including squad leaders—to carry out a commander’s intent and mission orders.

When he considers the missions that U.S. soldiers face, and the sustained training and education it takes to keep them ready for anything, Dailey recalls his mother’s words to him as a young boy. “Honey,” he remembers her saying, “you don’t have to be good at everything, but it helps.”

Dailey promotes standards that prepare soldiers to operate on any battlefield, such as prioritizing physical fitness, improving training and education, and having the best equipment. He also wants the Army to retain only the highest-quality soldiers and to make certain they are physically and mentally ready to deploy.

“Let’s get back to what we’re for, and that’s fighting and winning our nation’s wars,” Dailey said. “That’s why the chief of staff’s No. 1 priority is so critical. If we do anything else or nothing else, we need to be ready.”

Dailey believes it is the “sacred” obligation of every soldier to spend the first two waking hours of every day on physical fitness. Physical training, he believes, is the core to creating a culture of preparing soldiers for the rigors of combat through unit cohesion, personal achievement, and mental and emotional resiliency.

When soldiers are challenged to achieve a physical best, he said, bonds are built, happiness and misery are shared, and the organization is strengthened. A zealous proponent of the “let’s get back to nothing happens before 9 o’clock except physical fitness” culture, Dailey called it “critically important, not just at the soldier level, but at the leader level because soldiers respect what leaders do.”

Physical fitness will still be measured with the Army Physical Fitness Test (APFT), he said, because it gauges a general level of fitness with consideration for the physiological differences by age and gender. But there will soon be a gender-neutral operational fitness test that measures the operational force by MOS.

“It’s different from the APFT because it’s specific to your job,” Dailey said. A pilot of the readiness test developed by the U.S. Army Forces Command and the U.S. Army Training and Doctrine Command was conducted over the summer.

To enhance that culture of readiness at the very start of an enlisted soldier’s career, a new method of assessing physical fitness was launched in January that determines a recruit’s physical suitability for his or her chosen MOS.

Called OPAT, for Occupational Physical Assessment Test, it matches soldiers to jobs before they ship to basic training. Less than a year into implementation, the results look “excellent,” Dailey said.

“We don’t have long-term data yet, but the short-term data proves that it’s going to drop attrition,” he suggested, adding that, in combination with lower injury rates in basic training due to smarter delivery of physical exercise, the test will help lower early attrition rates by more accurately identifying the physical potential of a recruit to serve in a certain MOS.

OPAT measures strength, agility and endurance. It is a product of Training and Doctrine Command’s Soldier 2020 study addressing the integration of women into previously closed combat MOSs. The Army wanted a nongender-based metric to gauge soldiers on their physical potential to serve in any MOS, Dailey said. Before OPAT, recruits had only to prove they could do a minute of pushups, a minute of situps and a 1-mile run, known as the 1-1-1 assessment. As long as they could pull that off, pass the medical standard and score well on the Armed Services Vocational Aptitude Battery, they could enlist for any MOS available to them, he said.

New recruits are assessed in four tests for upper and lower body strength and power and aerobic fitness, including jumps, throws, lifts and runs. Recognizing that some MOSs are more physically demanding than others, Dailey referred to the job of truck driver as one that would surprise people for its physical requirements, and to that of an artilleryman as another MOS that demands physical strength and stamina.

“The average weight of an artillery round is about 75 pounds and it has to move a couple of feet to get inside the gun and you have to carry it from ammo storage to that gun,” he said. “It’s a big shell and it doesn’t care if you’re a man or a woman, thin or heavy. It doesn’t care, it weighs 75 pounds.”

Putting recruits through the rigors of OPAT starts them on a path to physical fitness and creates a baseline for the culture of physical readiness, but is only the beginning of Dailey’s multipronged strategy to indoctrinate a deeper culture of non-negotiable standards that guarantee readiness.

The single biggest cause of nondeployability—soldiers who cannot deploy with their unit—is failure to keep medical appointments. It is that simple, Dailey said, and can be solved.

For Dailey, this is a discipline problem easily solved with a focused chain of command that leads by example with completion of their own required screenings, and ensures that soldiers get to their appointments and follow-ups.

“Just get them to the appointment, and they’re ready to go,” Dailey said.

The smaller category of nondeployables is what Dailey calls the “temporarily injured people,” those who are healing and recovering from injuries sustained by the nature of what soldiers do.

“The Army is very rigorous physically and people get hurt in everything from PT to combat,” he said. “It’s just the rigors of what we do on a daily basis.”

Fixing readiness in the pool of nondeployable soldiers in either category, he said, requires maximizing the ability of the Army medical system to get the appointments and follow-ups soldiers need, getting the chain of command and physicians to agree on treatment plans, and adhering to the recommended treatment.

At some point a tough call must be made to begin separating a soldier through the medical evaluation process if they cannot meet readiness standards, Dailey said.

“We have to make those tough decisions. It’s our responsibility to the American people that we have physically, mentally, emotionally, morally ready soldiers to fight and win,” Dailey said, acknowledging the difficulty—but necessity—of making that call. “The readiness aspect says it’s unsustainable, and it’s not what’s best for the U.S. Army, and that’s the tough part.”

Promotions among NCOs are being granted only once the designated level of professional military education has been completed, a hard hurdle that is non-negotiable, Dailey said.

Under a program launched in January 2016, soldiers selected and recommended for promotion by their chain of command are trained at the unit level to meet the skills necessary to lead soldiers and educated at the institutional level—the basic leaders course for promotion to sergeant, for example. Then, once all those requirements are met, a soldier pins on the higher rank and receives the associated compensation and benefits.

When the program started, he said, there were about 25,000 NCOs in what he called “the backlog [of those] who hadn’t been to the requisite level of education commensurate with their skill level.” Eighteen months later, he said, that number was down to roughly 3,500 in the Regular Army. The so-called backlog was made up of soldiers who had already been promoted, as well as those on a standing promotion list.

“There was no forcing mechanism saying you had to meet the standard prior to being promoted,” Dailey said, noting that ensuring the NCO corps has completed the Army’s training and education requirements is a path to readiness because, in part, it sets a standard for everyone. “This is a standards-based Army. Lead by example and soldiers will follow that example.”

Dailey is passionate about using training and education as ways to enhance readiness while also investing in the future success of soldiers once they leave the Army. His goal is to certify every soldier in every MOS that translates to a skill in the civilian world. The Army, he said, provides world-class education and training for its soldiers but those aren’t worth much in the outside world.

“I have truck drivers that have driven hundreds of thousands of miles with double and triple combinations—hazmat at night in the snow with no lights on with a lower accident rate than most major truck industries in the United States—and they can’t get a job when they get out of the Army. Welders go through some of the most intensive welding training, but they can’t weld because they’re not certified to weld,” Dailey said. “We’re changing that.”

Through a proposal to Army leadership, Dailey wants to mobilize a credentialing and accreditation initiative that involves using federal tuition assistance funds earmarked under current rules for academic endeavors and making the same funds available for technical certification.

“Our force is technically trained. They are technical experts, not academic experts,” he said, questioning why the Army is prohibited from using “our tuition assistance dollars to capitalize on the training we’ve paid for with our tax dollars.”

Credentialing and accrediting the technical expertise of soldiers and leveraging the professional military education they receive, he posited, would have a significant impact on their ability to get a good job once they leave the Army and lower the unemployment rate among military veterans.

“We want them to be productive members of society, and recognized not just for their service and sacrifice, which they should, but for the value they bring to their community,” Dailey said.