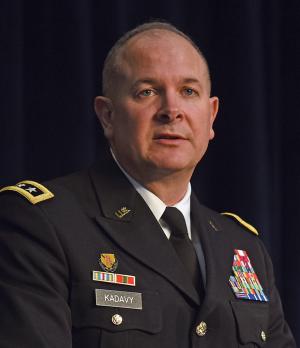 A shift is underway in the Army National Guard that will change the way units of citizen-soldiers train, mobilize and deploy, bringing them closer to the regular Army operational tempo than ever before, according to the three-star general who commands the oldest component of the U.S. military.

Called ARNG 4.0, the Army National Guard effort is driven by the expectation that the U.S. will face threats on multiple fronts overseas within a decade, requiring some units to be ready and able to deploy in as few as 30 days, and that there will also be heightened reliance on the National Guard’s air defense capabilities.

Lt. Gen. Timothy J. Kadavy, Army National Guard director since March 2015, said with the shift toward a new standard of readiness to meet emerging threats all over the world, “we’re shaping the ARNG not based on the last 100 years but what we’ll have to do the next 20 to 30 years.” The plan, he said, “isn’t something that just came out of the blue. We’ve been moving toward this point since the late ’70s with the all-volunteer force.”

What Kadavy has called the “fourth evolutionary leap” in the way the National Guard trains and operates, the strategy builds on the experiences of the past 15 years. Instead of ramping up for operations in Iraq and Afghanistan with an 18-month lead time to gather people, train units and secure resources, the new strategy is the same one implemented by the Army in fiscal 2017 in which leaders are ready and units are staffed, equipped and trained at sustainable levels to quickly deploy for simultaneous contingencies.

“4.0,” Kadavy said, “is being ready without a notification of an upcoming mission. Where the Army relies on us in certain cases for capability, we have to be ready. We’ve built an Army that needs all three components to go to war.”

Along with the armored and Stryker BCTs, the National Guard has all the Army’s field cannon artillery battalions, most of its rocket battalions above brigade, four attack reconnaissance battalions, and, along with the Army Reserve, Kadavy said, “We have the vast majority of the theater-opening capability, so we have to maintain the readiness of these units going forward.”

The heavy reliance on the Guard as key forces means more training days for some units, specifically the high-demand armored and Stryker BCTs and the units that support them. Units tapped for deployment will complete a rotation at the National Training Center at Fort Irwin, Calif., and the Joint Readiness Training Center at Fort Polk, La., in their “available” or fourth year of readiness, something the National Guard has never done, Kadavy said.

“Going to NTC every four years is new. Some ABCTs went about 15 or 20 years ago; that was the last time they went for a decisive action,” Kadavy said. “Some of them have gone as a culminating training event before going to Iraq or Afghanistan, and it was focused on what they’d be doing related to a counterinsurgency fight. What they’re doing today is specifically directed and written and executed in a decisive action role.”

Readiness of the National Guard also got a boost with the congressionally authorized end strength of 343,000 by the end of fiscal 2017, an increase of 8,000 soldiers. The additional soldiers won’t be used to create new units but will, instead, boost troop levels in brigade combat teams. In some cases, units will be staffed at 118 percent to “drive up their personnel readiness,” Kadavy said.

National Guard and active-duty soldiers are operating and training together more than they ever have.

To understand the Army National Guard’s evolution to ARNG 4.0, Kadavy summarizes its previous three evolutions, beginning with the post-Vietnam 1970s and the start of the all-volunteer force, when draft deferrals made up the majority of the National Guard’s 402,000 soldiers. Standards were low and training was on the job.

In the 1980s during the Reagan-era military buildup, Kadavy said, a one-Army standard was adopted and with it the requirement for a physically fit, professional force.

Standards were incorporated for physical fitness, height, weight and haircuts. Regional training institutes were established with U.S. Army Training and Doctrine Command programs of instruction to ensure soldiers met the classification requirements for their military occupational skill sets, “all of which moved us to a strategic reserve of the Army,” Kadavy said.

With the terrorist attacks of 9/11 came the National Guard’s third bump forward and the beginning of near-constant operations alongside the rest of the U.S. military. The National Guard had been operationalized.

“Suddenly the Guard was being mobilized in numbers we’d never seen, so we really became the operational reserve of the Army and our dynamic changed there again,” Kadavy said. The National Guard would mobilize and deploy more than 560,000 soldiers over a 15-year period.

For soldiers who had joined the National Guard after the Reagan years, it was no longer 15 days of training in the summer and one weekend a month, with some NCO education thrown in. Guard units were mobilizing, training and deploying for yearlong rotations, then coming back home and turning their equipment over to the next unit in the pipeline—repeating the process at intervals that weren’t always predictable.

With ARNG 4.0, Kadavy said, there will be more training for more soldiers, and the global demand for the Army’s capabilities means the requirement to mobilize and deploy will be up. But that will be tempered by more predictability through targeted readiness pools that families and employers can follow and use to prepare for absences.

“We’ll be doing some additional training for some units within the Army National Guard in order to achieve that sustained readiness requirement,” Kadavy said, “but I think we’re more than up to it because every time we’ve done it previously, soldiers have had the opportunity to enlist and re-enlist. They understand what we’re asking of them.”

National Guard soldiers have been deployed around the world in recent years for various missions, and Kadavy maintained that morale and enthusiasm for the work is high because leaders are straightforward about the operational tempo and soldiers and their families know what to expect.

Keeping pace with ARNG 4.0 is the integration of modern equipment for Guard units. Overall, Kadavy said, the National Guard is equipped at about 94 percent or more of its standard table of organization and equipment—about the same as the active component.

The lifespan of the Humvee, which Kadavy refers to as “the workhorse of emergency and domestic response” in the states and a key portion of the Army, is being extended with the help of Congress and the Army. It will continue to be driven by the National Guard for up to 20 more years, even though some units are on deck to eventually receive the new Joint Light Tactical Vehicle on a shorter timeline.

New or upgraded equipment is welcome and desirable, but an unexpected byproduct of getting more equipment is the Army National Guard is running out of places to keep it. Almost half the Guard’s facilities were built more than 50 years ago, long before planners could have imagined the burgeoning growth in gear and equipment soldiers have today.

“Our facilities aren’t where we’d want them to be. We have armories that are 48 years old but units with equipment we didn’t have 48 years ago,” Kadavy said.

What’s needed are parking lots, weapons vaults and controlled areas for sensitive kit like night-vision goggles and secure communications equipment. Electrical systems that can support training simulators and training classrooms need upgrades, and some facilities in areas with lower Guard populations are underused.

The Guard “has a plan, and we just have to go fight and make our case for resourcing it,” he said.

Meanwhile, the Guard is investing in upgraded ranges so states have the ability to complete weapons qualification, and the 143,000-acre Orchard Combat Training Center in Idaho with its 21 training ranges will be developed into a collective training area that can support the requirements of an ABCT.

Citizen-soldiers’ combat readiness and ability to do the warfighting mission, he said, enhances the National Guard’s state mission as well. “The uniqueness to be able to plan and execute and support operations is critical to emergency management” and the country gets “two things for the price of one.”

Getting the word out about ARNG 4.0 is a priority for Kadavy, who has hosted commander conferences and town halls with soldiers and families, spoken to couples at relationship-building programs, visited industry, Congress and leadership in the 54 states and territories, and talked with media.

“Most Americans understand why we serve and how important it is. It’s just explaining to them why we’re doing it, why there are more training days for certain formations,” he said. “Once we do that, they understand. They may not always agree with it, but they understand what we do.”