Talent Quest: Expanding the Capabilities of the Army Reserve

Talent Quest: Expanding the Capabilities of the Army Reserve 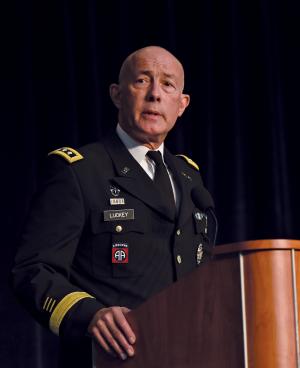 Using the 1908 origins of the Army Reserve as a timeless template for the future, the commander of today’s 200,000-strong Reserve aims to hone the legacy skills of the strategic federal force, and expand that set of capabilities with new skills for what is expected to be a more complex battlefield.

“The progression of the Army Reserve in terms of where we go and what we do has shifted from a strategic framework to an operational posture,” said Lt. Gen. Charles D. Luckey, chief of the Army Reserve. That modern reality means the Reserve and the Army National Guard, rather than taking years to get ready and build capacity for a directed mission, have shifted to an expectation of “a much more routine access to and use of that capability as an operational part of the Army,” Luckey said.

Driving this shift is a new threat environment in which close to half the resources, commodities and capabilities the Reserve brings to the fight need to be able to move more quickly than usual, sometimes in less than 30 days, to new areas of the world, potentially at the same time. This includes chemical, signal, engineer survey and bridge-building units, finance, transportation and military police, he said.

“At least 40 percent of what I have has to go within the first 90 days of the requirement, and it puts a high demand on us making sure they’re going to be able to meet the timelines,” Luckey said. “That means my bench strength has got to be pretty good.”

About 95 percent of the Army’s civil affairs capability and half the military’s medical capabilities are in the Reserve. There are other go-to capabilities like petroleum distribution nodes, quartermaster, public affairs, legal and logistics, whose unique skill sets will require them to sustain high readiness levels.

A strategy created in the months after Luckey took command in June 2016 is called Ready Force X, a mechanism to build short-term readiness for some 30,000 soldiers in these high-demand units. The units have since been identified. But some challenges remain, including money for extra training, if there is a requirement for it, and the level of complexity of each unit’s individual task, equipment maintenance and weapons systems. Sometimes, it’s the sheer size of the formation itself that determines needs.

Luckey said a chaplain detachment or dog-handling team may not require a lot of additional training or expense because they’re likely to maintain a standard high degree of readiness. Still, if a Reserve skill is needed and the unit must deploy in short order, “one of my challenges as a leader is figuring out which is harder, the small formation to get it deployed in 14 days or a much more complex formation that has 25 days,” he said.

On Technology and Talent

Building readiness is a top priority for Luckey, who sees an important part of that to be an expansion of the Reserve’s pool of skills to meet new and challenging adversaries.

For the Reserve chief, this means finding and keeping the best talent in the same way the Reserve did when it was established, only now that process would be applied for all things digital, such as cyber, artificial intelligence and capabilities that are emerging in commercial technology.

On what he calls his “journey of discovery,” Luckey has begun to scour the country in search of a better understanding of this technological landscape. As the leader of the Army Reserve, he said, it is incumbent upon him to “be a screening force for the Army, to stay in touch with what’s going on out there in the commercial sector of America because most of my soldiers, that’s where they work. That’s how I learn about this.”

His journey has included meetings with industry in places like Mountain View, Calif., home to the country’s top technology firms, and with researchers at the Massachusetts Institute of Technology in Cambridge.

Luckey is also thinking of new ways to harness the brightest talent behind the advances. This has led him to consider locating the Reserve’s 10 cyber protection teams—which are in varying stages of achieving operational proficiency—in strategic geographical areas, such as Mountain View, where they might serve as a “catch basin for talent that was initially brought into the Army through the active force” and may be working for more money in the private sector.

He is banking on the fact that when people finish their time in the Army, they think “ ‘That’s it, I did my five years in the Army, now I’m going to go do something different.’ Then after six months they miss it. They want to stay connected.”

Approaching it from a different angle, Luckey said, would be the possibility of bringing in talent through nontraditional means such as accelerated direct commissioning without having to run them through four years of ROTC. He cites the judge advocate general corps as an example.

“The Army does a pretty good job of bringing in lawyers in a very accelerated compressed fashion,” he said, explaining that “you go to law school, you get certain constructive credit for the time you’re there. You come in at one rank and get promoted relatively quickly once you’ve met the basic requirements to be an Army officer.”

Unlike troops recruited for combat arms units, people with high-demand specialized skills, such as doctors, chaplains and lawyers, would not be expected to attain the proficiency level of a combat arms soldier or become steely-eyed killers. “They may be that, but that’s not why you’re bringing them in. You want them to feel, sense and understand that they’re a soldier, but at the end of the day, you really want a lawyer,” he said.

In his quest for broad visibility on future requirements, Luckey has also talked with medical personnel, a few of whom suggested that doctors be recruited from a population that’s further along in their careers. A 40-year-old surgeon with an established practice, home and family, they reasoned, is still physically fit, probably financially more secure, and might be more open to the extra commitment of service in the Army Reserve.

The Reserve must also keep an eye on technology as new talent is assessed, he said, such as driverless trucks. “Absent massive destruction of the electromagnetic spectrum—which is entirely possible, by the way—the likelihood that every truck would necessarily have to have a driver probably will go down significantly in 10 years,” said Luckey, at the same time recognizing the possible future relationship between cyber and trucks.

How, he questioned, would the trucks move if the electromagnetic spectrum was destroyed by the enemy, and would cyber soldiers have the technical savvy to keep this from happening?

“I don’t know the answer to that, but those are the questions we ask,” he said, circling back to the need for soldiers with technological skills.

In the Army Reserve “cyber market,” Luckey explained, “the cyber hook is in many cases of interest to young cyber warriors,” soldiers who spend a weekend or two weeks in the summer performing Title 10 military missions in cyberspace that they wouldn’t be able to do if they weren’t a soldier in federal status.

In late 2016, the Army hosted a monthlong “Hack the Army” challenge in an effort to identify vulnerabilities in the Army’s computer systems, and Luckey believes that such activities can leverage the fun factor of working on cyber in the Army to attract talented new soldiers.

All in the Family

With about 200,000 soldiers living or working in some 20 time zones, Luckey said he must invest the time to gather, sustain and nurture the support of families and employers for what is expected to be a higher operational tempo in years to come.

“From an employment perspective, my challenge as the leader of this team is to make sure we remain ready enough to be relevant, but not so ready that our soldiers can’t keep meaningful employment,” he said.

Ninety-three percent of his soldiers are part-time Reservists. When he’s not scavenging the country for ideas or planning ways to build readiness, he’s meeting with people, employers, families and business leaders. In some companies, there are employees who facilitate and maintain a connection between the Reserve and corporate America through their connections in the Reserve.

“I am personally very cognizant of my responsibility to try to influence influencers in our society to support our soldiers and to reaffirm for employers across America that when you share your talent with the Army Reserve, you’re a partner in continuing to help us weave this strategic fabric when it comes to the security of the U.S.,” Luckey said.