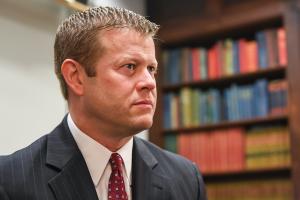 Ryan D. McCarthy has a three-word mantra to remind him and those around him of his mission: readiness and lethality.

An Afghanistan War veteran, McCarthy was picked by the Trump administration to be the Army’s chief management officer and overseer of everything from reform to weapons-buying, administrative processes to force structure. He was unanimously confirmed and appointed as the 33rd undersecretary of the Army on Aug. 1 and sworn in and named acting secretary of the Army on Aug. 3 while awaiting Senate confirmation of Raytheon Co. executive Mark Esper for the top post.

In an interview, he talked of being “ruthless with prioritization” to spend money wisely, of having more input from warfighters when developing weapons and equipment, and of his biggest assignment: helping convince Congress and the American people that the Army is worth their investment.

Readiness, a word he concedes has “a lot of flavors” in the Army, to him means having the ability to “put soldiers on a plane to immediately address a priority” and “readiness to fight tomorrow.” Army Chief of Staff Gen. Mark A. Milley “deserves tremendous credit for arresting the decline” in readiness, he said, but added there is still much to do.

Today’s Army is certainly lethal, as it has shown in 16 years of fighting in Iraq and Afghanistan, but while the Army has been concentrating on counterinsurgency and counterterrorism missions, other armies around the world have been studying the U.S. “Near-peer competitors have studied this, and they have made investments, very surgical investments, for overmatch capabilities,” McCarthy said. “Clearly the world has caught up with us.”

The Army needs to make its own investments in advanced weaponry and technology to have the upper hand, he said. “Modernization is the tool to be more lethal on the battlefield.”

It is important to have input from warfighters when planning weapons and equipment improvements, McCarthy said. “Lessons learned on the battlefield are how we have developed many of the systems you see today,” he said, citing MRAP vehicles and the family of unmanned aerial vehicles.

“We do learn a lot from the field,” McCarthy said. “We have the most seasoned combat leaders in the history of the Army.”

Making the Army readier and more lethal is “very difficult to do with the compressed fiscal environment,” he said. “Clearly America has tremendous fiscal challenges that are bigger than the Department of Defense,” he said, but the Army needs help.

One of the dragons to be slayed on the path to helping the Army is the chaotic federal budget process that has left the service not just underfunded but also unclear how much money it has to work with in the short and long terms.

His part in paving over the fiscal quicksand is helping the Army tell its story, and doing so by having easily understandable quantitative data that shows what the Army needs, how much it costs and how the money will be wisely and efficiently spent. “You cannot defend America on a budget. You defend it on a strategy,” he said. A revised national security strategy being developed by Secretary of Defense Jim Mattis will help provide the basis for funding. “There is work to be done,” McCarthy said.

Getting more money to further improve readiness may depend on the ability to show how the Army stopped the decline and documenting improvements, he said, suggesting a measurement that would show, for example, how soldiers perform better after several cycles of platoon-level live-fire exercises. “In large measure, you’re trying to show the Congress you need thousands of repetitions to master a skill set,” he said. “That’s physics and that’s money.”

Acquisition reform is a process that does not rest squarely on McCarthy’s shoulders because it is a defensewide matter with a lot of congressional attention, but he does have a part as the chief management officer for the Army. The goal, he said, is “how to simplify the process, organize differently and change the culture so we can develop weapons systems faster and put them into the hands of warfighters sooner.” It is also important to “keep the weapons systems relevant for years to come” by making technological improvements.

McCarthy, who has previous experience in the defense industry, on congressional staff and as an aide to former Defense Secretary Robert Gates, said he knows there have been many failed attempts at acquisition reform but holds out hope for success.

“Warfighters have to have a much greater role in requirements,” he said, citing former senior military leaders who used their position and stars to help shape weapons decisions. “There has to be clear interpretation and definition of requirements, and that is a warfighter task.” Having warfighters involved gives clear definition to the capabilities sought, preventing confusion and expensive adjustments further down the development path, he said.

Working for Gates was a different type of job than being a senior leader. “It is the greatest honor of my life to be in this position,” McCarthy said.

McCarthy was a warrior during the U.S. invasion of Afghanistan, a young special operations liaison officer with the 3rd Ranger Battalion, 75th Ranger Regiment, who was a month from getting out of the Army when the 9/11 terrorist attacks happened.

“Sept. 11 fundamentally altered the trajectory of my life,” he said. “I had former colleagues that wound up killed in action.” His college roommate was killed in Iraq.

Since coming to the Pentagon in his new role and visiting commands, he’s given a lot of thought to people he’s served with and his experiences. He was single when he deployed, but he has met with spouses. “They need to know with certainty how we are supporting them,” he said. “It is a fundamental responsibility for me.”

The first thing he looks at when visiting a command is the culture, he said. “I look at people’s moods, how they are doing.” Much of his time is spent talking with senior leaders focusing on command responsibilities and priorities, but “I like to get out and talk to soldiers within a command and see how I can make their life a little better.” That is a lesson he said came from working with Gates, who was known for spending time talking with troops.

“There are a million people and their families depending on you,” McCarthy said of the responsibility. “It is humbling, but it burns white-hot inside of you to move the needle to do something,” he said, pledging to continue meeting with soldiers and families as often as possible. “It will help me recharge the batteries when I get out there and see soldiers in the field.”