Ten Association of the U.S. Army (AUSA) chapters have contributed to the National Museum of the United States Army (NMUSA) Veterans’ Hall Program to ensure their chapters will be prominently displayed on the Veterans’ Hall Donor Wall as a permanent tribute to their members.

Adding, “We’re very pleased with the support and generosity of so many chapters that are helping to both raise awareness of and contribute to the project.” 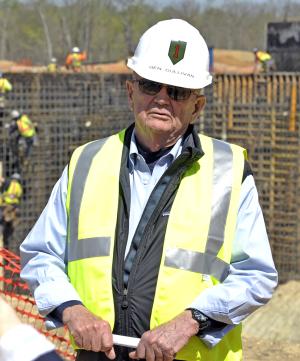 Sullivan also mentioned that 36 other chapters that have contributed to the NMUSA campaign are working toward Veterans’ Hall Donor Wall recognition.

“As the project continues, we hope many other AUSA chapters show their support of their Army and its history by getting their names on the Veterans’ Hall wall as well,” Sullivan noted.

The National Museum of the U.S. Army Veterans’ Hall will provide a unique setting to honor the service and sacrifice of America’s veterans.

The multi-purpose space at the museum will be used for veterans to host reunions, meetings, dinners, and official functions in a patriotic atmosphere.

The hall will also showcase artwork, artifacts, the interactive Registry of the American Soldier, and will host a variety of educational outreach initiatives including presentations, demonstrations and lecture series.

“The Veterans’ Hall is a unique space within the museum that is specifically focused on veterans. While the museum as a whole tells Army’s storied history, the Veterans’ Hall provides space for active duty and retired soldiers to reflect on their service and with one another,” said retired Lt. Gen. Roger Schultz, AHF’s president.

“Particularly with AHF and AUSA’s close affiliation, we hope that all AUSA chapter members will rise to the occasion in support of such an important project,” he added.

For a starting sponsorship level of $2,500, organizations will have their names displayed on the Veterans’ Hall Donor Wall and be recognized in a special book published after the dedication ceremony.

Groups will also receive an official campaign banner and certificate to display. Additional benefits, such as exclusive invitations and an opportunity to host an event in the Veterans’ Hall, are associated with higher giving levels.

For more information on the Veterans’ Hall Program, visit armyhistory.org or contact Beth Schultz Seaman, director of Grassroots Development, at (800) 506-2672 or [email protected].