AHuntsville, Ala., business executive received the Association of the U.S. Army’s Third Region highest award at its annual awards banquet at the conclusion of the three-day region meeting convened prior to the association’s Global Force Symposium and Exposition.

A.R. “Rey” Almòdovar, co-founder and chief executive officer of Intuitive Research and Technology Corp., accepted the Robert F. Cocklin Award presented each year to an individual who has made significant contributions to the U.S. Army and the nation.

It is named in honor of the late Maj. Gen. Robert F. Cocklin, a past executive vice president of the Association of the U.S. Army. 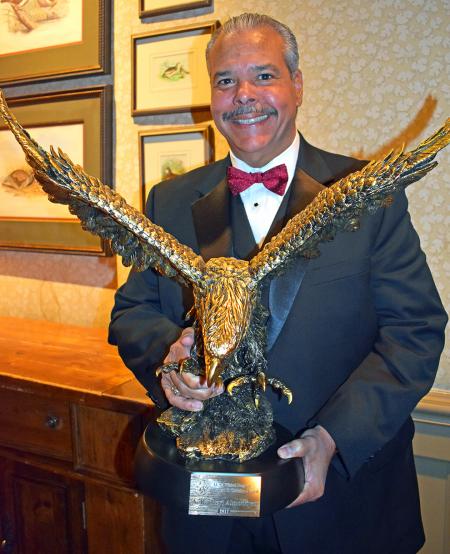 Almodòvar founded Intuitive in 1999 to provide management, technical and engineering services to the Department of Defense and the commercial industry.

Prior to founding Intuitive, he served for 14 years as an Army civilian employee.

Almodòvar is a mentor of youth and is also active in the Huntsville community.

He serves on the board of directors of the National Children’s Advocacy Center, the Business Council of Alabama and the Huntsville Hospital Foundation.

The company has been named as one of the Best Places to Work by the Huntsville/Madison County Chamber of Commerce for the last eight years.

Intuitive was also named by Military Times as one of the top 10 “Best for Vets” employers.

The award recognizes an individual from one of the region’s chapters who provides support to AUSA through volunteering at the chapter, regional or national level.

This award is presented annually to an AUSA Third Region member who has demonstrated a lifetime of dedicated service to AUSA through volunteer efforts at the chapter, state and/or regional levels.