Vietnam veterans and their families gathered at the Salem Veterans Memorial at noon on March 29 for one of several municipal wreath-laying ceremonies held across the Roanoke Valley.

The ceremony observed the 44th anniversary of the final withdraw of American troops from Vietnam and serves as part of the 50th anniversary remembrance. 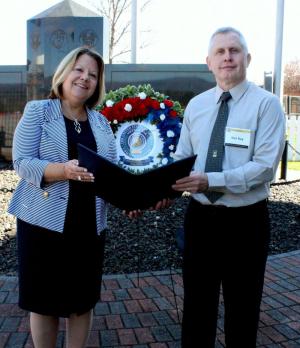 Fifty years later, President Obama issued a congressional proclamation declaring March 29, 2012, as Vietnam Veterans Memorial Day with the promise of memorials and remembrances to occur across the nation from 2012 to 2025.

In 2015, representatives of Salem and Roanoke cities, Roanoke County and the Town of Vinton, in partnership with the Stonewall Jackson Chapter of the Association of the United States Army, founded a committee tasked with holding at least two events a year from 2015 to 2017.

March 29, 2025, will mark 50 years since the last combat troops were withdrawn from Vietnam.

Councilwoman Jane Johnson, on behalf of the City of Salem, read a proclamation declaring it Vietnam Veterans Day in Salem to memorialize the fallen and missing in action and to honor the wounded, POW’s, their families and all that served during the Vietnam era.

“Whereas a grateful nation should express its appreciation, support and respect to all veterans of the Vietnam War,” Johnson read from the proclamation, “including more than 1,600 of our service people missing in action and their families for their sacrifice on our behalf.” 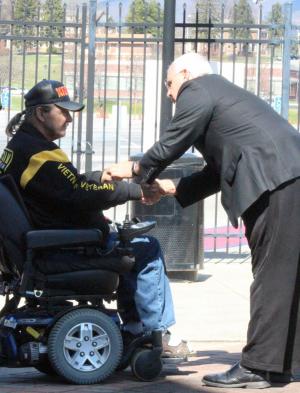 It is estimated that nearly 60,000 service people lost their lives, including the nearly 1,600 now considered missing in action. Approximately 9 million actively served during the Vietnam War era and it is estimated that about 7 million are still living today.

“Whereas, out of great respect for the military personnel who served our country during the Vietnam War, the City of Salem is privileged, honored and humbled to participate in this celebration,” Johnson continued to read.

Following the proclamation announcement, a wreath was laid in front of the memorial and Vietnam era veterans in attendance who served between Nov. 1, 1955, and May 15, 1975, were recognized and given a commemorative 50th anniversary lapel pin.

“We thank this committee,” said Johnson, “for its work to commemorate the war and to recognize our Vietnam veterans.”