As hundreds of West Point cadets poured out from the stands onto a snow-covered Lincoln Financial Field in Philadelphia, Pa., following a 14-13 triumph over Navy, Army celebrated perhaps a turning point in the storied 118-year rivalry between the two schools.

For West Point’s Class of 2018, being a part of the football tradition that shifted the rivalry in Army’s favor after losing 14 straight to the midshipmen made the victory sweeter, said Cadet Vincent Hale.

With the one-point victory, the Army also regained possession of the Commander-in-Chief’s Trophy for the first time since 1996.

Before the game started, football players rushed to the stands to greet fellow classmates, many of whom they attend classes and take part in drills with on a daily basis.

“The football team acts as an extension of us,” said Hale, who will commission in May as a field artillery officer.

The weight of the annual contest was not lost on Army’s seniors. Cadet Sam Crump, who will commission as a quartermaster, said the annual tradition continues to unite cadets.

“It’s better than Christmas,” Crump said. “I look forward to this more than 99 percent of the year. For people to sit in this seat and be lucky enough to view this game, it is an absolute blessing. I cannot think of a better experience with 4,000 of your closest friends.”

After pounding their way to a 7-0 lead early in the first quarter, Army trailed the midshipmen for most of the contest. Navy led 13-7 before a late run by senior running back John Trainor put Army at the one half yard line. Senior quarterback Ahmad Bradshaw, behind a smothering effort by the Black Knights’ offensive line, scored the winning touchdown to put Army ahead. 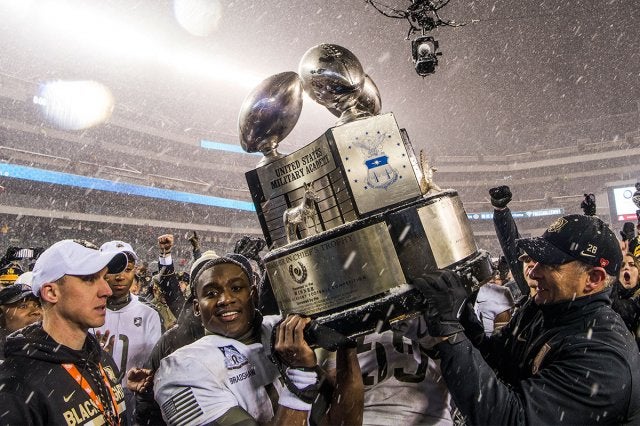 “It was just a quarterback sneak,” Bradshaw said. “I don’t think I would’ve gotten in without my fullback and offensive line.” More than 68,000 spectators, including 4,000 West Point cadets, braved frigid temperatures and snow to attend the game.

While most cadets attend the contest each year, Lt. Col. Britt Erslev, a regimental tactical officer who mentors and coaches cadets at West Point, was attending her first Army-Navy game.

“It’s a very historic game and it’s a great opportunity to carry on the rivalry,” she said. “But it also shows that we’re united at the same time.”

“For us this game is a really great rivalry because it’s really the two biggest services duking it out,” said Cadet Nicholas Miller. “But in the future we’re basically going to be serving side by side combating U.S. enemies. To me personally, as a cadet, this is a way of just having that competitive spirit of ‘we are America and we’re the best,’ and we have to be the best in the world to fight and win the nation’s wars.”

Army coach Jeff Monken said he noticed a stronger bond among Army’s football players during the postgame celebration after winning the Commander-in-Chief’s Trophy.

“The brotherhood is alive in that locker room,” Monken said. “I am privileged to be a part of this team and to represent the great academy and the United States Army and for all those that serve all over the world. It is an incredible feeling.”