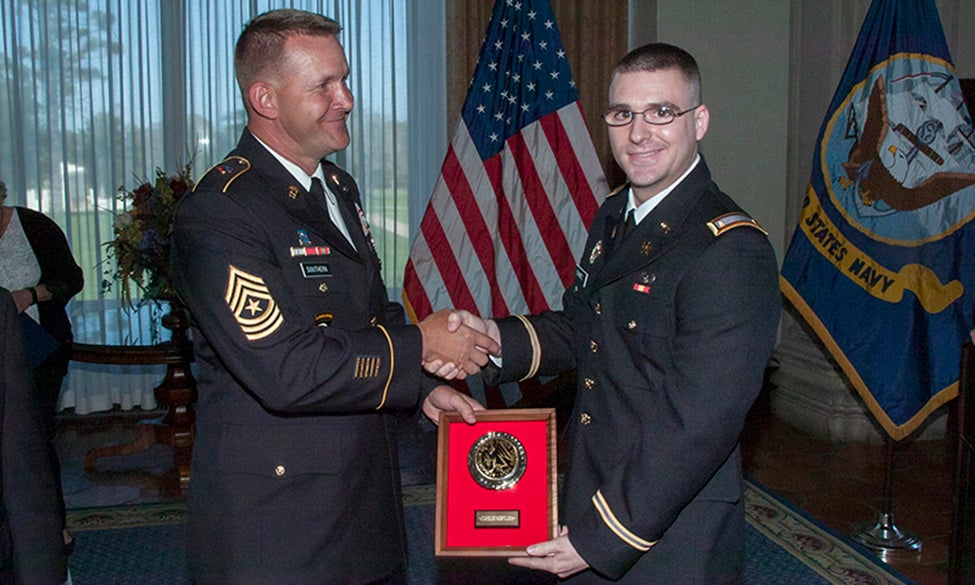 Shmel was recognized with the award, in part, for research into his degree thesis titled “The Implementation of a Photonic Nyquist Folding Analog-to-Information Receiver.”

“Above all, it’s extremely humbling and surprising for me, as I’m only a second lieutenant, to be selected for this award ... I’m honored,” said Shmel.

Part of the requirement for the AUSA Stilwell Chapter award includes outstanding performance in academics; however, Shmel says his thesis research was definitely a big part of the winning formula.

“The thing that probably set me apart, and helped me achieve this award, was my thesis work on the ‘Implementation of a Photonic Nyquist Folding Analog-to-Information Receiver,’” said Shmel.

Adding, “That’s kind of a mouthful, but what that means is a compressed sensing methodology that has applications for the Army, Navy and Air Force.”

Shmel, an Eden Prairie, Minn., native who says he joined the Army to give back to the community, will continue his education following graduation from NPS, allowing him to further use the knowledge he has gained at the university.

“Interestingly enough, I’m actually not technically branch qualified. ... My next assignment is to go to cyber BOLC [basic officer leader course] where I will learn how to actually do my job as a 17 Alpha, an Army Cyber Operations Officer.”