It is no surprise that Gen. George S. Patton remains one of the most popular figures of World War II.

What is surprising is that he had a former gossip columnist and Soviet spy on the Third Army staff providing military intelligence.

A veteran of World War I, Robert S. Allen became a Washington journalist between the wars – and a paid informant for the NKVD, a predecessor of the KGB. He returned to the Army as an officer for World War II, joining Patton’s staff in 1944 and serving as chief of the situation (combat intelligence) subsection and as executive officer for operations.

Allen also kept a wartime journal and was later hired by Twentieth Century Fox to develop a movie script about Patton. 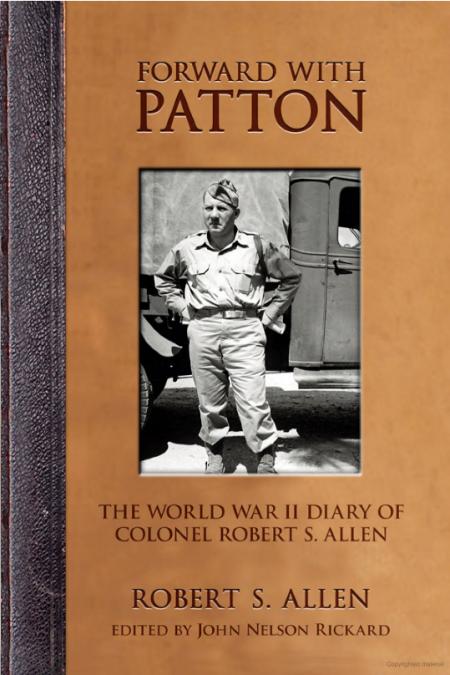 Capt. Rickard works in the Professional Military Education section of the Canadian Army Command and Staff College and is the author of two previous AUSA titles: Advance and Destroy: Patton as Commander in the Bulge and Patton at Bay: The Lorraine Campaign, 1944.

AUSA sat down with Rickard to ask a few questions about Allen and the new book.

AUSA: This is your third book connected to Patton. What brings you back to him as a subject?

Rickard: Since I had spent so much time on Patton’s generalship I felt it was necessary to shift focus a bit to his staff. I knew that there would be tremendous value in Allen’s diary in particular because of his position.

AUSA: Allen frequently shares strong opinions of fellow officers. Which ones seem apt and where does he seem off the mark?

Rickard: Allen was correct about [Col. Oscar] Koch, the G-2, and [Col.] Halley Maddox, G-3, and Walter Muller, G-4. Allen reinforced Patton’s negative view of [Lt. Gen.] Manton Eddy, XII Corps [commander], in that he was too cautious. I think this is fair. Allen’s criticism of [Gen.] Walton Walker is misplaced. Patton had tremendous confidence in “Bulldog.” I think Allen’s criticisms of [Col. Edwin] Sibert, Bradley’s G-2, and [Col.] Monk Dickson, [Lt. Gen.]Hodges’s G-2, are fair. It is difficult to confirm Allen’s negative statements about his colleagues on the staff because we only have his opinion. What the others might say about Allen, if their own diaries were revealed, would be interesting to say the least.

AUSA: How would you rate Allen as an intelligence officer? How did his background as a gossip columnist – and his time as a Soviet spy – color his work?

Allen admitted to fudging numbers sometimes in order to serve a higher purpose in terms of getting Patton’s plans adopted by [Gen. Omar] Bradley. I will leave it to the reader to determine if this propensity for distortion is a journalistic trait.

AUSA: How does Allen’s personal diary differ from his published memoir?

Rickard: Lucky Forward contains no reference to ULTRA which was not revealed until the 1970s and none of the vitriol of the dairy. Lucky Forward is a straightforward account; the diary is deeply personal testament on a number of issues, including personalities, Patton obviously, and the regular force old boys club.

AUSA: What stories about Patton will most surprise the reader?

Rickard: Readers may not be surprised by Patton’s willingness to kill POWs, but they will certainly be morally engaged, I believe, when they read Allen’s account of Patton’s rant about going down to units to tell them not to take prisoners.

I also think some readers will be surprised by Patton’s sympathy toward black soldiers. He suspended courts-martials for several of them saying: “I believe that you will contribute more to the war effort doing duty than in a PW cage. But I want to warn you. The first crooked move you make, that sentence will be re-imposed and you go to jail for five years with dishonorable discharge. You have a chance to rehabilitate yourselves. I expect you to do that and to be good soldiers.”

Forward with Patton is published by University Press of Kentucky. To order a copy, visit http://www.kentuckypress.com