The legacy of Joint Base Myer-Henderson Hall’s oldest and most storied unit will soon be carved in metal and etched in stone after a groundbreaking ceremony for the long-awaited Old Guard Monument was held near Summerall Field Nov. 21.

The monument will focus on a larger-than-life bronze sculpture by Barbara Mungenast depicting three Old Guard soldiers – a saluting sergeant in ceremonial Army blues, a fifer from the Old Guard Fife and Drum Corps, and a combat infantry rifleman – representing the regiment’s multifaceted missions. 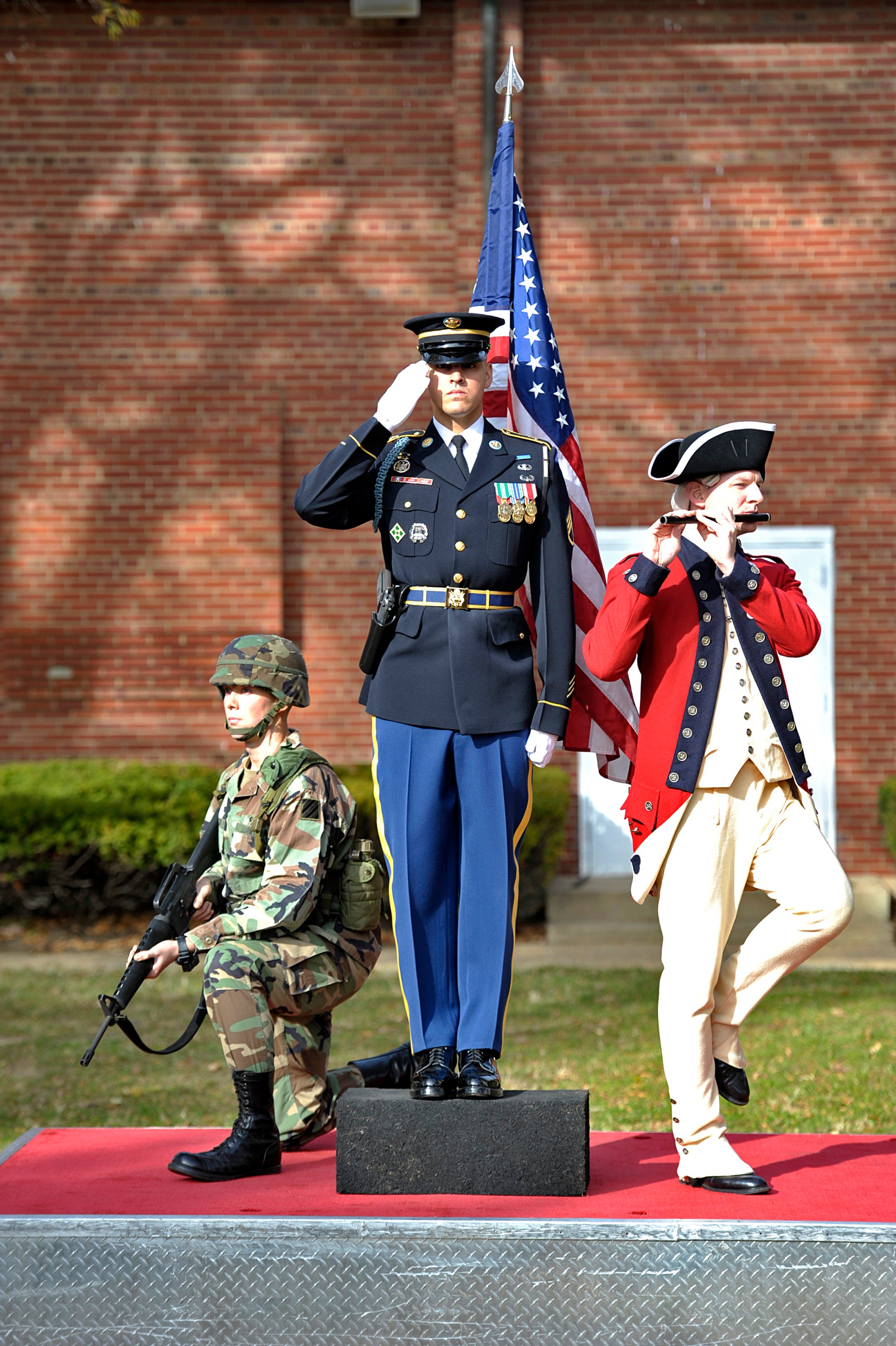 During the groundbreaking ceremony for The Old Guard Monument, three soldiers pose in the form of a statue that will be part of the monument. (AUSA News photo by Luc Dunn)

A replica headstone will rest at the base of the sculpture, calling to mind the regiment’s solemn duty to provide military honors to all interred at Arlington National Cemetery.

The sculpture will be set in a public plaza designed by architects Michael Bratti and Alex Zaras, and will feature stone fixtures and green spaces.

Gifted to the U.S. Army by the nonprofit Old Guard Monument Foundation, the monument is expected to be completed by mid-2018.

The project is the brainchild of retired Army Col. James F. Laufenburg, who was the Old Guard’s regimental commander on Sept. 11, 2001, when the unit deployed to the Pentagon to maintain security and assist in rescue and recovery operations.

At the ceremony, Laufenburg said that witnessing the dedication and professionalism his soldiers displayed during that crucial mission inspired him to spearhead the creation of a permanent monument to the Old Guard’s venerable history and ongoing service.

“After the experience down at 9/11 [the Pentagon], I said to myself, this is the oldest active-duty infantry regiment in the Army today, and there is no plaque, monument, anything that recognizes them for that, so that’s literally where that came from,” he recalled.

Laufenburg added that the monument would not only stand as a lasting tribute to the Old Guard, but is also meant be a functional space that will be woven into everyday life on the post.

“From the beginning, this project was designed to provide the installation an area to have intimate ceremonies, promotions, re-enlistments, changes of command, and to compliment the overall beauty of the installation,” he said. “I believe, when completed, the sculpture and park will provide exactly that, and will be a great addition to the community.”

Garkey echoed Laufenburg’s hope that the site will serve as “a great focal point for Fort Myer,” and he expressed pride in seeing the monument break ground under his command.

“This monument has been a long time coming,” Garkey said. “The concept actually started when I was here as a company commander, so to see it come to fruition on my watch is extremely meaningful.”

Garkey praised the artist and architects who designed the monument, noting that he particularly admired the way Mungenast’s sculpture captures the Old Guard’s distinctive traits while also conveying its unique role as a symbolic representative of the Army as a whole.

“From a distance, it looks like the Army,” he remarked.

“You have to get really up close to recognize it’s the regiment, which is just like what we do on a daily basis. Most people see the Army, they don’t see the 3rd U.S. Infantry Regiment (The Old Guard).”

Garkey said he was honored by the presence of the Old Guard veterans who returned to their former post to share in the celebration.

“Having all the former members of the regiment shows what this organization means to somebody, not just over their time in the unit, but over the span of a career and then a span of a lifetime,” he said. “You have a deep emotional attachment to a unit that you come back to that you served in, and I think it’s really impressive that we had so many people come back to support us today.”

Among the former commanders on hand was retired Col. Greg Gardner, who led the unit from 1997 to 1999.

Of the monument that will stand in perpetual tribute to his service, and that of countless others before and after him, Gardner declared that “it will be a tremendous testament to our regiment and to our traditions.”

(Editor’s note: The Association of the U.S. Army supported this project and was a contributor to the monument.)

Francis Chung is a staff photojournalist for the Pentagram newspaper, a publication focused on Joint Base Myer-Henderson Hall.