Take These Steps To Change Our Army

Take These Steps To Change Our Army

In the early 1970s, a shrinking U.S. Army with a reduced modernization budget faced the possibility of overmatch by a much larger and increasingly capable Soviet military. In the wake of the Vietnam War, Army leaders realized they had to change the way the Army developed the future force. In a retrospective 1983 Military Review article, “To Change an Army,” Gen. Donn Starry, then-commander of what was U.S. Readiness Command and the second commander of the U.S. Army Training and Doctrine Command, examined successful and unsuccessful efforts to change military organizations prior to World War II. He identified four tenets associated with successful change:

Starry then described that over the next decade, senior Army leaders remained determined to innovate, modernize and change the service. Successive Army chiefs of staff and leaders of the U.S. Army Training and Doctrine Command pursued training and education reforms, developed AirLand Battle Doctrine, and modernized with emphasis on the “Big 5” systems. The result was a highly proficient, modern and professional Army that provided the foundation for U.S. joint force superiority.

More than 30 years after Starry’s article, our Army is in an analogous situation that demands a change in how the Army develops the future force. As in the 1970s, threats to national and international security are increasing. Due to the rise of revisionist powers on the European landmass as well as threats from other state and nonstate actors, the world today has become more dangerous than at any time since the end of the Cold War.

Hostile, revisionist powers—Russia, China, North Korea and Iran—annex territory, intimidate our allies, develop nuclear weapons, and use proxies under the cover of modernized conventional militaries. Confronting revisionist powers is challenging because they employ sophisticated strategies that combine military efforts with propaganda, disinformation, espionage and political subversion. They often act below the threshold that would elicit a concerted military response from the U.S. and our allies.

Those adversaries have also modernized and reorganized to present threats unlike those the U.S. has faced in the last 15 years of war. Russia is waging limited war for limited objectives utilizing sophisticated combinations of improved capabilities such as unmanned aerial systems, cyber, electronic warfare and massed artillery combined with integration of conventional and unconventional forces. The People’s Republic of China continues to pursue a long-term, comprehensive military modernization program designed to improve the capacity of its armed forces to fight and win short-duration, high-intensity regional contingencies.

Iran’s modernization efforts include the use of automated systems on land, sea and air; ballistic missiles; and the development of nuclear capability. North Korea is expanding its nuclear arsenal and improving its ballistic missile force to complement an aging but still large and capable conventional force.

Transnational terrorist groups seize upon opportunities created by communal conflict and weak governance. ISIL, for example, is a nonstate actor that aims to create an Islamist militant state across large portions of Iraq, Syria and surrounding areas. These nonstate actors are gaining access to advanced technology and capabilities. Recently, Houthi rebels in Yemen have demonstrated the capability to strike targets on land in Saudi Arabia with ballistic missiles, and on the sea against United Arab Emirates and U.S. Navy ships with cruise missiles.

Risk to national and international security is increasing not only because of increasingly capable adversaries, but also because of reductions in Army capacity and modernization. The Regular Army, which currently stands at 482,000, is shrinking from a wartime high of 570,000 to 450,000, and the Army’s modernization budget has fallen 74 percent since 2008. Today’s Army is the smallest since World War II while the number and diversity of missions have not declined.

There is mounting risk associated with an Army that could prove too small and insufficiently modernized to protect our nation and its vital interests. We recognize that in our democracy, we get the Army the American people are willing to pay for. It is our job to do the best we can with the resources Congress and the American people provide. 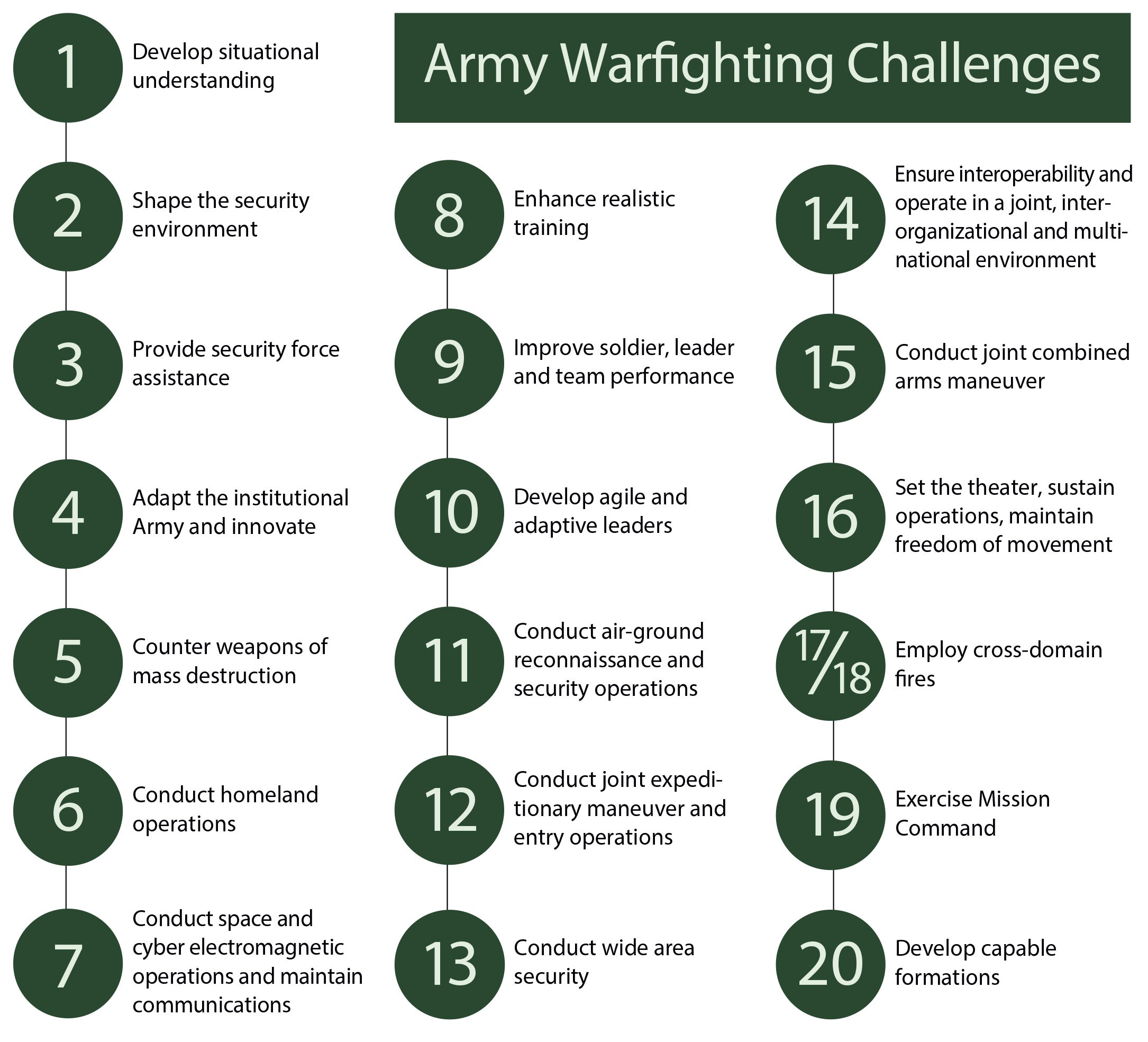 To reduce risk to national security and ensure readiness for tomorrow, the Army must think clearly about future armed conflict; learn in a focused, sustained and collaborative manner; analyze what we learn to integrate and prioritize force-development efforts; and implement solutions to ensure the joint force’s ability to win.

Future forces must be capable of deterring adversaries and, when called on, conducting expeditionary maneuver, deploying rapidly, and transitioning quickly into operations of sufficient scale and ample duration to accomplish the mission. Army forces must be capable of defeating enemy organizations; securing terrain; protecting populations; consolidating gains; and projecting power outward from land across the maritime, aerospace and cyber domains.

State, nonstate and hybrid threats are increasingly capable and are narrowing U.S. competitive advantages, not only on land but also in the other domains. To overcome these challenges, future capabilities must permit Army forces to project power from land to influence other domains, create overmatch in close combat, and extend mutual support across long distances. Thinking about future war requires humility. As the distinguished British military historian Sir Michael Howard observed, “No matter how clearly one thinks” about future war, one will not get it exactly right. “The key is to not be so far off the mark that it becomes impossible to adjust once that character is revealed.”

Learn. To ensure the future Army does not find itself far off the mark, the Army learns under the framework of Army Warfighting Challenges, which are first-order questions allowing Army leaders to think clearly about change and continuity in warfare; and through Force 2025 Maneuvers, the Army’s Campaign of Learning, which are the intellectual and physical activities helping leaders understand emerging capability gaps, identify opportunities to maintain overmatch of future enemies, and develop interim solutions that mitigate gaps and exploit opportunities.

The Army Warfighting Challenges allow the service to learn in a focused, sustained and collaborative manner. War games such as Unified Quest and experimentation under Unified Challenge allow leaders to test options for how the Army might operate in future scenarios. Learning events such as the Army Warfighting Assessment seek a “triple payoff” of informing force development; generating readiness; and ensuring interoperability with joint, interorganizational and multinational partners.

Analyze. The Army analyzes experiences and learning events to identify and define capability gaps, develop solutions and prioritize efforts. Rigorous analysis evaluates new capabilities based on their contribution to solutions for the Army Warfighting Challenges. Potential identified solutions in the near-term (present to 2025), midterm (2025 to 2035), and far-term (2035 to 2050) time frames integrate change in doctrine and force structure, innovation in training and leader education, development of equipment, and investment in science and technology.

Continuous learning and sustained analysis are vital due to the interaction of future force development efforts with adversaries who seek to counter perceived U.S. strengths and exploit perceived weaknesses. Analysis across the warfighting challenges produces the Army’s Capabilities Needs Analysis (CNA), which identifies high-risk capability gaps as well as high-priority solutions essential to maintaining overmatch over increasingly capable and elusive enemies. The CNA assists the Army Staff in prioritizing and resourcing capabilities, and informs the secretary of the Army and the chief of staff of the Army’s guidance for future force development.

Implement. Ultimately, the Army must implement solutions and deliver new capabilities to the force. Based on the CNA from fiscal 2015, the Army prioritizes the development of cross-domain fires, combat vehicles, future vertical lift, advanced protection, cyber electromagnetic systems, robotics and autonomous systems, and soldier and team overmatch.

The Army must improve implementation of solutions and expedite delivery of new capabilities through changes to requirements, acquisition and budgeting systems. Those changes include:

What we have learned in the last two years of the Campaign of Learning places increased importance on investment into modernization and advanced capabilities.

A Call to Action

The Army’s Think-Learn-Analyze-Implement process recognizes the need to modernize and innovate consistently with Starry’s tenets for successful change. The Campaign of Learning and Army Warfighting Challenges allow service leaders to identify the need for change by looking at the future war through first-order problems. Emphasis on leader development provides the rigorous education to think logically about those problems. Engaging leaders across the force allows the Army to maintain continuity among the architects of change. And venues such as the Army Warfighting Assessment provide a rigorous trial to evaluate solutions. Ultimately, the knowledge gained in the Campaign of Learning presents an opportunity for the Army to turn that knowledge into valued outcomes in terms of capabilities to put into Army formations.

Readiness for future war is essential to the preservation of peace. And being prepared for future war demands the commitment of every soldier and Army civilian across the total force. Soldiers understand that the American people provide the moral support and physical resources to build a capable Army. It is a soldier’s duty to thoughtfully and faithfully construct a force worthy of the American people’s expectations and investment.

Every soldier, Army civilian and leader contributes to thinking about, learning for, analyzing or implementing the future Army. Soldiers and civilians alike must understand their individual tasks in this mission and work collectively to prepare for the future while remaining ready to fight today and determined to win.