How to Grow a Capable Cyber Officer

Given the rising number of military cyber activities between the U.S. and its adversaries over the last several years, it is increasingly clear that cyberspace is now an intrinsic part of the current operating environment. As the fifth warfighting domain, it is a space in which we fight and win battles, and its criticality to mission success is becoming more and more apparent with time. As Adm. Michael S. Rogers, commander of U.S. Cyber Command, recently noted, military leaders should expect cyber units to be able to assume the main role as well as the supporting role when facing U.S. adversaries. This often entails coordinating cyber effects within the planning cycles of our maneuver counterparts.

As leaders of a nascent branch, cyber officers are in the process of transitioning into a maneuver mindset that is needed for the cyber force to be successful. Such transitions are complicated, however, as the vast majority of newly appointed cyber officers come from operations support backgrounds or have no operational background at all. The transitional dilemma poses numerous Mission Command challenges in the cyber force, threatening its ability to effectively dominate this crucial domain. 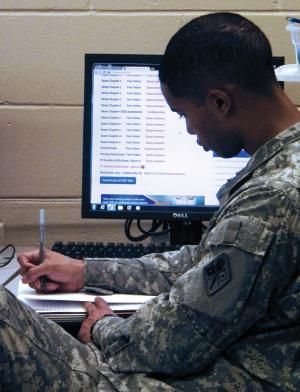 Nonetheless, with the cyber corps’ aspirational designation as an operations branch, Army leaders must recognize and embrace that cyber officers must be trained and empowered as maneuver leaders who adopt an ethos and demonstrate the ability and competence to lead maneuver operations. Without this acknowledgement, Cyber Mission Force teams will be relegated solely to supporting roles.

Cyber leader development and culture must be fundamentally different than those of the operations support branches. Cyber leaders must be prepared to lead operations as the main effort, to deliver effects at the decisive point of operations, and to manage resources in support of those efforts.

Given the carryover from their legacy branches and the necessarily strong emphasis on technical versus tactical expertise, the vast majority of junior cyber officers are not prepared to assume such a role. For the cyber branch to embrace operations, its leaders must focus on three areas of change to appropriately transition cyber officers from their role as operations support officers into operational leaders: institutional change, structural change and cultural change.

Institutional change is a major factor of success as the cyber branch transitions from various legacy unit heritages. The U.S. Army Cyber Center of Excellence and schoolhouse are the executive agents for cyber’s efforts toward institutional change; both are based at Fort Gordon, Ga. Cyber doctrine, an essential component of the center’s mission, is derived from vision and experience. It not only informs the activities of cyber forces but is also vital to the integration of cyber and electronic warfare capabilities into the larger operational force. Thus, doctrine is the foundation that will enable the integration of cyber elements, and the role of cyber leaders, into the Army at large.

Cyber branch education and training, also based at Fort Gordon, is another important piece of institutional change. Currently, the Cyber Basic Officer Leader Course, Cyber Operations Officer Course and Captain’s Career Course are being established under the auspices of the Cyber Center of Excellence, which has the responsibility to train and indoctrinate future cyber leaders in the Army. In the relatively short history of the Army’s institutional cyber officer education, much of the curriculum has focused on increasing the technical adeptness for officers who are new to the domain.

Unlike Army maneuver institutions, however, cyber leader curriculums do not train officers as supported commanders or operational leaders. For example, there is no exercise at the Cyber Basic Officer Leader Course that reflects the infantry officer’s experience during live-fire exercises. While traditional maneuver branches train officers by placing them in supported or supporting command roles from Day One, the cyber branch is currently focusing on individual skill training to prepare officers for an operational role.

To better prepare cyber officers to assume combat roles, these leaders must be given opportunities to understand the significance of such responsibilities within an academic and training environment. Such opportunities include “live-fire” exercises, wherein officers are repeatedly assigned the mission of either supported or supporting operational role. For cyber officers, such exercises would occur between cyber elements conducting offensive cyberspace operations and defensive cyberspace operations in various supporting and supported roles. They would also consist of Cyber Mission Force elements supporting units from other branches of the Army—for example, infantry, field artillery and air defense artillery—and vice versa.

In order for these exercises to occur successfully and for cyber leaders to be fully integrated into the maneuver force, cyber units must first be resourced like other maneuver units. As table of distribution and allowances units, they do not receive the full complement of command and staff personnel to be fully mission capable. Nor do they receive the equipment necessary to be fully compatible with other maneuver units. Resourcing the cyber force as a maneuver branch, wherein mission capacity is judged by its resourcing status, is a critical factor to integrating cyber operations with those of its sister branches, both in exercises and “real-world” operations.

In addition to institutionalization of cyber leaders as operational leaders, command and control relationships within the Army’s cyber force must be engineered to reflect operational leadership and responsibility. Army cyber unit commanders must not merely act as “force providers” to the future cyber force, wherein unit commanders do not have an operational role. Despite their heritage to signals and military intelligence branch units, cyber units cannot mimic their operations support command and control models.

While the force provider role (often referred to as the administrative control responsibility) serves a functional purpose in operations support units where commanders are tasked primarily with training and readiness, cyber unit commanders of the future must be tactical experts who are capable of coordinating the efforts of their subordinate efforts. The term “dual-hatted” leader, when officers lead both an operational effort and soldier readiness, does not exist within the operations mentality; combat leaders are the single points of failure for everything the unit does and fails to do. In an environment of persistent cyber conflict, cyber leaders will need to embrace this role so they are capable of adequately balancing the priorities of the mission with the welfare and training of the soldiers. These are not, and should not be, separate roles.

Finally, the Army’s cyber force, and the Army itself, must adapt a culture that supports the concept of cyber officers as operational leaders. Like infantry or armor officers, cyber officers must believe and prove themselves to be capable and willing to engage our adversaries at decisive points within the operational environment. Maneuver competence is a key factor that contributes to the culture of the cyber branch as well as its integration into the larger profession of arms. Internal to the cyber units, senior commanders must fully embrace principals of Mission Command, enabling and trusting subordinate leaders to take disciplined initiative to conduct missions.

To achieve this level of trust, cyber officers must maintain high standards, and the branch must have high thresholds, for candidate selection. This latter principal is critically important to the cyber branch’s external efforts to fit in to the existing Army culture.

Specifically, cyber officers must be competent professionals who can earn the trust of leaders from other operations branches, and prove themselves capable of delivering decisive effects in support of the other branches as the supported commander. Thus, despite the technical nature of the cyber branch, the principles of leadership and Mission Command continue to be cornerstones of effective operations and are ideas that must be central to warfighting in the cyber domain.

This article skims the surface of issues that are currently being addressed by Army leaders and the service’s cyber leadership. For example, at the U.S. Military Academy’s Army Cyber Institute, researchers are exploring these concepts in depth to support the Army’s efforts to more efficiently conduct talent management of cyber officers. Such initiatives shape and inform ongoing efforts to assess, recruit, develop and retain a world-class cyber force that is capable of fighting and winning our nation’s wars in cyberspace.

Lt. Col. Justin Considine is commander of the 781st Military Intelligence Battalion (Cyber). Since 2011, he has served in cyber assignments from the technical and tactical to the policy and national level including chief of the Army Remote Operations Center, mission commander, and Joint Staff cyberspace operations branch chief in the deputy directorate for global operations. He holds a bachelor’s degree from Loyola University, Md., and a master’s degree from Troy University, Ala., and is a graduate of the Command and General Staff College.

Capt. Blake Rhoades is a member of the Army Cyber Institute at West Point and an instructor of international relations in West Point’s Department of Social Sciences. From 2012 to 2013, he was the company commander of the Army’s first Cyber National Mission Team at the 780th Military Intelligence Brigade, Fort Meade, Md., and has deployed twice as a signals intelligence platoon leader in support of Operation Iraqi Freedom. He holds a bachelor’s degree from the University of Alabama and a master’s degree from Carnegie Mellon University, Pa.