Soldiers love to reminisce about the glory days they spent in great units, and lament the times they were stuck in bad ones. What determines the difference? Command climate—the perceptions we form about the level of unit cohesion and performance, which reflect a unit’s collective attitude and identity.

Yet the Army is not providing commanders with sufficient information to manage command climate. The official survey instrument falls short of achieving a comprehensive climate assessment, and the Army has barely scratched the surface in explaining how to actually manage command climate. To prepare commanders for success, the Army must improve the tools for assessing climate as well as the direction for developing action plans to implement effective change.

Army Regulation (AR) 600-100: Army Leadership defines climate as the “state of morale and level of satisfaction of members of an organization.” Command climate is a reflection of unit members’ perceptions about the unit, and creating a positive organizational climate is a core leader competency. To influence organizational climate effectively, leaders must understand the existing unit climate, develop a vision of how it ought to be, and then develop a plan to achieve the desired state. This requires effective feedback tools that remove information filters between leaders and unit members and also convey those perceptions accurately.

In 2013, the secretary of the Army issued guidance to address serious command climate issues such as equal opportunity (EO) and Sexual Harassment/Assault Response & Prevention (SHARP). The Army needed to take deliberate action to assess and improve these climate areas quickly. Included was the directive that all Army units would use the survey instrument developed by the Defense Equal Opportunity Management Institute as the official command climate survey tool.

AR 600-20: Army Command Policy establishes the regulatory requirement for commanders to conduct command climate assessments. However, the guidance is noticeably insufficient, contained in only nine lines of text within the 13-page chapter on the Army’s Equal Opportunity Program. This not only undersells the importance of command climate but also implies that when the Army mentions “command climate,” it is really concerned only with preventing discrimination. AR 600-20 reinforces this message by providing a sole additional reference for implementing command climate: the Commander’s Equal Opportunity Handbook. Certainly, the topic of managing command climate is worthy of its own paragraph in AR 600-20, and would be more appropriate in either the “Command Policies” or “Other Responsibilities of Command” chapter.

In addition to clearer guidance, commanders need a comprehensive, effective survey instrument with which to assess command climate. The Defense Equal Opportunity Management Institute survey we obtained asks 105 questions (including subquestions), 67 of which are about discrimination, fair treatment, and sexual harassment or assault. This leaves only 38 questions, or 36 percent of the survey, to address topics such as trust, cohesion, job satisfaction and organizational performance. Even more concerning is that there are no questions addressing the quality of training, equipping, soldier/family support, communication, safety, or mentorship and professional development—obvious areas that also influence command climate.

The disparity toward EO and SHARP continues with a feedback report from the survey that we obtained from an actual unit. Of the 102-page report, 23 pages deal with EO and 53 pages analyze SHARP statistics. It is understandable that the Army must thoroughly assess these challenging leadership issues. Yet we must remember that EO and SHARP are merely two components of command climate, and the survey significantly shortchanges the many other aspects.

With the majority of survey questions related to EO and SHARP, there is also the possibility soldiers believe the entire survey, and the Army’s concern about climate, are limited to those topics. Some commanders may associate the survey as primarily an EO tool, because the survey process is managed as an EO function coordinated through EO officers, with the Defense Equal Opportunity Management Institute managing the data collection, analysis and reporting processes. Some leaders consider it less relevant for assessing command climate as a whole, reducing its perceived value and usefulness. Combined with the fact that nearly all details the Army provides about command climate assessments exist within guidance about managing EO, we are giving the wrong impression about the concept of command climate.

Defenders of the survey and current guidance may believe commanders have available options to help patch the holes in the climate assessment by adding up to 10 locally developed questions as well as opportunities for respondents to write in free-text answers regarding any issues they want to identify. These factors do give commanders some flexibility to address issues that are relevant to the individual unit. However, they do not make up for the overall imbalance of the survey, or for the missing elements influencing command climate as a whole. 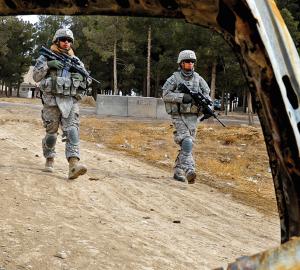 The Defense Equal Opportunity Management Institute could revise its survey to achieve a more comprehensive assessment of command climate. One option would be adding more questions about general climate areas while either reducing the number or reformatting the questions related to EO and SHARP. Applying a layering technique to the survey questions would be even more effective, potentially reducing the number of questions significantly. If a soldier indicates that he or she has experienced or perceived issues with discrimination, then the survey should generate more subquestions to pinpoint the specific issues. However, if the soldier indicates the unit’s EO climate is healthy, then the survey skips those subquestions and moves on to other areas influencing command climate.

The Army’s other alternative is to develop a new instrument to assess command climate. The U.S. Marine Corps went this route in 2013, keeping the Defense Equal Opportunity Management Institute survey as a tool specifically for exploring EO climate. To be fair, this was the intended use of the survey in the first place. The drawbacks to creating a new survey would be the cost of duplicating the survey data collection and reporting architecture, as well as the cost of time and frustration in adding another survey for soldiers to complete.

Improving our survey instrument will provide commanders with a more comprehensive assessment of command climate. Feedback enables leaders to identify areas where perceptions do not match intended goals, also referred to as a gap analysis. This is the starting point for leaders to develop action plans to address the gaps between the current climate and the desired climate. Unfortunately, while the Army specifies that commanders must develop action plans, we have very little guidance explaining how to do it.

Too often in the Army, we recognize problems but fail to take action that accomplishes sustained improvement. Currently, the Army’s command climate guidance focuses on conducting assessments to identify issues. If our actual goal is to improve climate, then we owe leaders more direction than just “develop an action plan.” Commanders need options and tools to address the issues they identify, as well as instruction on prioritizing climate issues, communicating results, and developing and implementing effective climate change efforts.

In Organizational Culture and Leadership, culture expert Edgar Schein provides a recommendation for leaders to influence organizational change. He describes two types of mechanisms leaders can employ. The first, primary “embedding” mechanisms, are the more effective methods leaders may leverage to create change. These include what leaders pay attention to on a regular basis; how they allocate resources; what behaviors they model; and what behaviors they reward, promote or punish.

Reinforcing mechanisms are things such as changes to organization structure, office layout, procedures, rituals and formal statements. These are more effective when they complement embedding mechanisms. Unfortunately, as Leonard Wong, a research professor in the Strategic Studies Institute at the U.S. Army War College, notes in “Changing the Army’s Culture of Cultural Change,” Army leaders all too frequently attempt change using only these reinforcing techniques—such as publishing a new policy letter or creating a special “stand-down day”—with marginal results.

In many cases, action plans require shared and sustained effort to accomplish change. Part of the commander’s action plan should include other key personnel who will assist in implementing and monitoring change initiatives. Complex issues may require establishing interim goals or subtasks as part of a larger effort. Techniques such as identifying milestones, developing reportable metrics and conducting progress reviews will likely increase success in achieving change.

Once leaders develop an action plan, they should communicate the plan within the unit (as appropriate), demonstrating commitment to take action toward improvement. Plans that require corrective actions related to specific individuals should certainly protect confidentiality; commanders should use discretion on sharing such information. Leaders should maintain this effort with updates corresponding to milestones and metric reviews. Finally, commanders should seek feedback to confirm whether action plans have been effective. Feedback is an important part of the communication plan; tools could include follow-up surveys, focus group sessions and individual spot checks.

Command climate, particularly at the unit level, is a collection of attitudes and perceptions of people in the organization. It often reflects the success or failure of unit leaders to build unit cohesion and competence within the current environment. Therefore, assessing command climate is a key feedback mechanism, allowing leaders to identify what is working well and what is not. Yet the Army is failing its unit-level leaders by not providing a holistic command climate assessment instrument or adequate guidance.

Great units are often shaped by leaders who know their soldiers and how to build the cohesion and effectiveness that leads to mission accomplishment. The Army’s very definition of leadership includes the ability to “improve the organization.” With a better assessment tool and command guidance on action planning, the Army can help more leaders build great units.