Over the next year, 26 installations are scheduled to receive the new Squad Advanced Marksmanship Trainer – with the first potential location slated for Fort Drum, N.Y., officials said.

The Army has been working on a squad-immersive environment since 2009, but limitations on virtual reality and other related technologies have hindered the development process, according to Maj. Gen. Maria Gervais, director of the Synthetic Training Environment (STE) Cross-Functional Team. 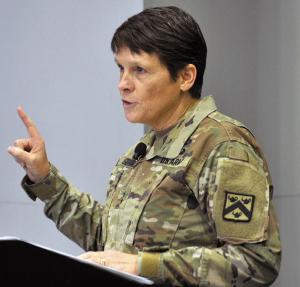 Recent advancements in the $5.2 billion virtual reality and gaming industry, though, have enabled the Army to field the virtual marksmanship trainer as an “immediate solution until a more robust squad-immersive environment is developed,” Gervais said.

Tied to the Soldier Lethality Cross-Functional Team, the new trainer is a joint venture with the Marine Corps, helping infantry and “close combat” forces achieve their training objectives, Gervais explained during the Association of the United States Army’s Annual Meeting and Exposition.

During a recent demonstration at Marine Corps Base Camp Pendleton, Calif., forces were outfitted with a goggle device synched to the Squad Advanced Marksmanship Trainer. From there, the squad lined up in a four-man stack and went through a series of breach-and-clear scenarios, she said.

Through the marksmanship training device, one scenario transported breaching forces to a Middle Eastern virtually-constructed environment, where they engaged with simulated enemy forces. More importantly, Gervais said, the four-man stack was able to do this while navigating through a live training environment.

“Now, we’re seeing technology where you can link the squad in, they can move, they can shoot, and keep going,” she said. “So, pretty exciting stuff.”

“We need to be able to provide our soldiers and leaders the ability to conduct hundreds of repetitions wherever they are located so they can improve muscle memory and increase proficiency,” Gervais said.

Adding, “The STE makes it possible to enhance home-station training and unit performance. Most importantly, the STE is focused on establishing common standards, common data, and common terrain to maximize interoperability, ease of integration, and cost savings.”

Additionally, the STE team has increased their industry engagement, leading to the selection of two firms to support development of “One World Terrain” and another two for the Army’s air and ground simulation platforms.

Moving forward, the CFT is considering what architecture and industry support is necessary to maintain the STE as a service, the she said.

Similar to the way Netflix works, incorporating a “training as a service” business model would potentially keep the STE up to date with the newest tools, providing soldiers the best possible training without any latency.

“With One World Terrain, we want to be able to pull down terrain at the right fidelity. If you’re a squad, the fidelity has got to be better,” G