The Army is slated to release the newest Enhanced Night Vision Goggle-Binocular (ENVG-B) to a select number of combat units sometime in fiscal year 2019, according to the Soldier Lethality Cross-Functional Team (CFT) officials.

The new ENVG-B has both night vision and thermal-sensing capabilities and “stereoscopic binocular depth perception,” providing soldiers with an illusion of depth on a flat image, officials said. 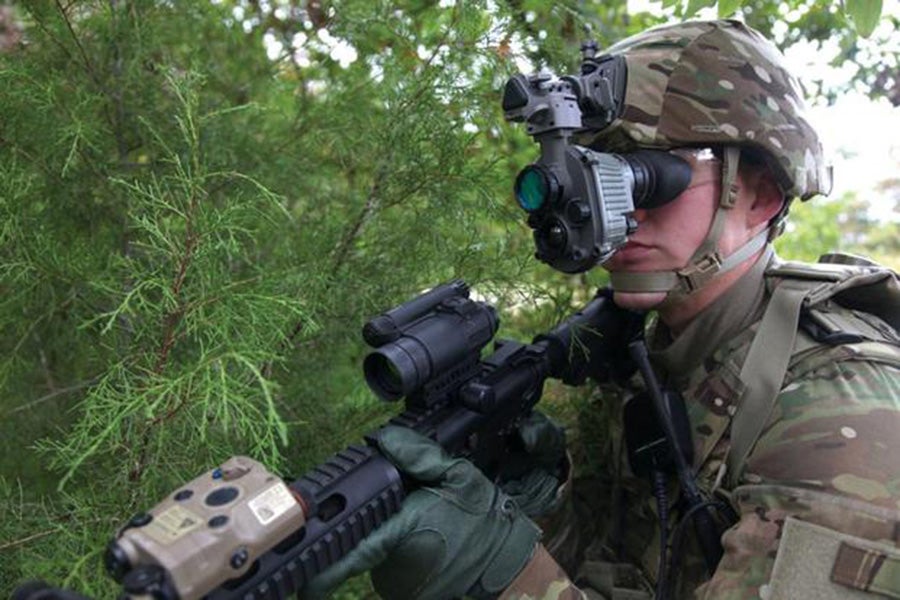 The Army is slated to release the newest Enhanced Night Vision Goggle-Binocular to a select number of combat units sometime in fiscal year 2019. (U.S. Army photo)

According to 82nd Airborne Division soldiers who field-tested the new technology, the new ENVG-B is a “game changer” providing soldiers with a unique advantage against an adversary, said Brig. Gen. David Hodne, soldier lethality CFT director, during the Association of the U.S. Army’s Annual Meeting and Exposition.

Soldiers testing the new device had a 100 percent improvement in weapons qualifications using that ENVG-B, along with a 300 percent increase in detection of targets in day and night environments, and a 30 to 50 percent decrease in the time taken to shoot a target, Hodne added.

Over the next three years, the Army is scheduled to field about 10,000 ENVG-B systems, according to Brig. Gen. Anthony Potts, the program executive officer in charge of PEO-Soldier. U.S. Army Forces Command has yet to finalize the list of units that will be among the first to receive the new ENVG-B.

Aside from the new night binoculars, the Army will also field the new ENVG version 3 in fiscal year 2019, he said.

Both devices will incorporate a wireless system that connects the goggles to a soldier’s rifle sites, Potts explained. Through testing, soldiers employing the ENVG version 3 “rapid target acquisition” capability have seen a 100 percent increase in first-time target engagement.

Back in July, the Army awarded an opportunity contract to five companies to develop prototypes for the Army’s Next Generation Squad Automatic Rifle System. The new system is said to replace the M249 squad automatic weapon serving in the automatic riflemen role.

Prototypes from the new weapon system are slated to be evaluated sometime in June 2019, Potts added.

“Much of this effort is informed by the findings of the 2017 Small Arms Configuration Study.

Previously, Probability of Hit drove a lot of our requirements,” said Hodne. “But now, [the Army is] looking at energy – at range. It is one of the critical factors that will define the next generation squad weapons, both the automatic rifle and the rifle.”

The goal is to have lethal effects on targets beyond 300 meters. The Phase II Prototype Opportunity will ask vendors to propose an automatic rifle, a rifle and a common cartridge.

“There’s a great logistics support function to having a common cartridge on the battlefield,” Potts said.

Adding, “From an engineering perspective … if you’re going to optimize a cartridge, you want the engineers that are developing these weapons to be able to optimize both concurrently.”