Officers who wore this uniform over 70 years ago remember the style to this day. But if it was loved and admired by so many, why was it removed from service?

As the new year is upon us, a development team is finalizing details to bring back the uniform, and making minor changes to the style that was unveiled at the Association of the U.S. Army Annual Meeting and Exposition this past October. The Army will make its decision on the return of the pinks and greens within a few months. As the service gets closer to unveiling the modernized style of a uniform once worn by “The Greatest Generation,” it’s a good time to look at the uniform’s evolution.

In the mid-1920s, the Army transitioned to a new, modernized uniform style to replace the World War I uniform. Formally known as the Army officer’s winter service uniform, the pinks and greens were distinctive for their olive drab (Shade 51) jacket and contrasting “pink” trousers. The tunic was made of a gabardine wool blend and was a dark, brownish green color (greens), while the trousers were a much lighter color that had a slight pinkish tone.

The combination created one of the flashiest and most striking uniforms ever authorized by the Army. It was worn by Army officers and in the Army Air Corps, the branch of the Army that split off in 1947 and became the modern Air Force.

World War II Flight Officer Daniel Keel, 94, a Tuskegee Airman, remembers his pinks and greens and how stylish they were. “My uniform was comfortable and attractive. It fit like a suit, and I really liked wearing my uniform. It just looked better to me than the style they have now,” he said.

The World War II officer’s jacket was a tunic adorned with three gold buttons featuring the U.S. Army seal down the center and smaller gold buttons on each of four pockets. Unit patches appeared on both sides, while ribbon bars and combat badges as well as aiguillettes were also authorized for wear. The shoulder straps on each side were adorned by the rank of the officer as well as a Distinctive Unit Insignia in certain units. On the collar of the uniform, the branch of service as well as the traditional U.S. collar brass were worn.

When the uniform was initially authorized, the M-1921 or “Sam Browne” leather officer’s belt and shoulder strap were regulation. This belt was worn over the uniform, and the shoulder strap ran through a loop on the top right shoulder. At the height of the war in early 1942, the Army switched to an integrated belt made of the same brown gabardine material as the uniform. While the Sam Browne belt was no longer used, the distinctive shoulder straps were seen on officer’s uniforms until 1946.

There were two styles of trousers that could be worn, slacks and jodhpurs. Calvary units wore jodhpurs as part of their uniform, but “pink” jodhpurs were also popular with high-ranking generals such as Gen. George S. Patton. While the slacks and jodhpurs were not an actual shade of pink, the olive drab (Shade 54), which was made of a tan/rose wool blend, appeared pink in certain light.

Beginning of the End

When the Eisenhower, or Ike, Jacket was created in 1944, it was the beginning of the downfall of the pinks and greens. Officers began to prefer the Ike over the longer, fancier tunic. Trouser regulations also became more relaxed as trousers that matched the darker tunic were introduced. However, certain variations of the pinks and greens long service coat were still used throughout the Korean War.

By the early to mid-1950s, the time of the pinks and greens was coming to an end. Many officers and enlisted men came back to the U.S. and either parted with their uniform or converted it for civilian wear and use. This demoralized the soldiers still wearing the style, as they saw their current dress uniform being sold for pennies, as well as being issued for wear by prison inmates and criminals. 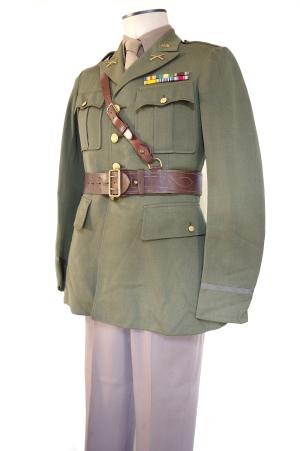 While the Army chose to adopt the solid green uniform, the newly formed Air Force became its own branch and adopted a dress blue uniform that is still in service today with a certain variation. This separation of branches may have been what led to the downfall of the iconic pinks and greens.

The Army officially adopted the Green Service Uniform in 1954, the year after the Korean Armistice Agreement. That uniform slowly became outdated as the stiff polyester fabric remained unchanged since the 1970s.

With the introduction of the latest uniform in 2007, the style and color scheme of the Army officer’s uniform was once again dramatically changed from solid green to a black, blue and yellow mix, along with a beret. While this style was a fresh design, it lacks the tradition of the historical look that dominated the feel of the uniforms of our country for decades.

As the Army gets closer to adopting a modernized version of the pinks and greens, there are many aspects of this renewal to explore.

Freshly commissioned, as well as seasoned, Army officers will be able to experience the same pride as American officers did over 70 years ago.

Veterans who wore the pinks and greens approve and support the possibility of it being reinstated. “Personally, I would like to see it back myself, but I guess I am prejudiced because I was in the old Army then,” Keel said.

In addition, the sharp-looking uniform could spark an interest in military history and teach a whole new generation about World War II. With the possible reissuing of the pinks and greens, what’s old will truly be new again.