“What are we waiting for?” a Ranger student stutters to his squad leader.

“The RTO is still getting comms. We’ll push forward in just a second,” the squad leader responds. Their radio telephone operator has been trying to gain communication, or comms, with higher headquarters for less than three minutes. Each minute feels more agonizing than the next, however, to the cold and weary Ranger students at the river crossing site in the dark swamp.

The students had walked several hundred meters through waist-deep water before hitting their objective on Whitmier Island in the middle of the swamp on Eglin Air Force Base, Florida, and they had walked several more hundred meters through darkness to reach the river now flowing in front of them. Their shivering is the only thing keeping them awake after days of practice combat patrols with little food or sleep.

“Let’s go.” The squad leader calls back to the first group of students ready to cross the slow-moving river. Students slowly push across the first few feet of a one-rope bridge. They are on a tight timeline after the last member crosses. Some students are in the early stages of hypothermia. They maneuver through the rest of the swamp as quickly as they can without tripping over brush in the darkness. Finally, the lead member of the squad steps out of the water into soft mud. He takes another step onto dry grass and dirt. They have reached high ground.

The students breathe a sigh of relief. Their body temperatures slowly start to rise as they gather on dry land and inspect their equipment to ensure nothing was lost. Ranger instructors count as each student comes out of the swamp.

Ranger instructors will complete similar swamp movements several more times during their assignment—11 times a year for some—with the 6th Ranger Training Battalion at Eglin. The 6th Ranger Training Battalion hosts the third and final phase of U.S. Army Ranger School, a grueling 62-day leadership course focused on small-unit tactics. The instructors’ training and development before ever appearing in front of students allows them to maintain a calm demeanor even in the most hazardous situations.

The Army defines leader development as “the deliberate, continuous, sequential, and progressive process … that grows Soldiers and Army Civilians into competent and confident leaders capable of decisive action.” Soldier development occurs best through hands-on training. For example, Situational Tactical Exercise (STX) lanes pose challenges to leaders that require them to critically think through a situation. Leaders must use a combination of established doctrine and common sense to solve tactical problems in an STX lane, and STXs allow superiors to learn how subordinates will react to situations.

Repetitive, hands-on experiences teach leaders how to apply doctrinal concepts in real-world scenarios, and this builds tactical and technical competence. While competence helps build confidence, leaders must sustain confidence against uncertainties that pose serious hazards for their soldiers.

Risk, or the “probability and severity of loss linked to hazards,” is inevitable in every operation, Army Techniques Publication 5-19: Risk Management says. Commanders acknowledge that inherent risk in all operations cannot be avoided.

Inherent risk may come in the form of terrain or weather hazards, civilian considerations or enemy activity. Leaders are trained to develop controls to mitigate the effects of hazards posed by inherent risk during operational planning. Mitigating prudent risk, on the other hand, requires an application of common-sense measures developed through hands-on training.

“Prudent risk is a deliberate exposure to potential injury or loss when the commander judges the outcome in terms of mission accomplishment as worth the cost,” according to Army Doctrine Reference Publication 6-0: Mission Command. The intent of deliberately exposing a unit to a potential hazard is to exploit opportunities that ensure victory rather than avoid defeat. A commander does not gamble a unit’s success on an event without considering potential hazards involved. Instead, the commander applies controls to mitigate those hazards and take advantage of tactical opportunities. Thus, commanders learn to manage risk just as they manage assets and personnel on the battlefield.

Risk management is trained as a deliberate process, with time focused on identifying hazards, assessing their potential for causing harm, developing and implementing methods or controls to minimize the harm caused, and evaluating the effectiveness of those controls. The risk management process can be accomplished during planning as leaders mitigate inherent risks in their operation.

The greater challenge is developing leaders to accept prudent risk and take advantage of tactical opportunities as they arise.

Retired Col. Kevin Benson specifies this type of risk in his April article for the Modern War Institute at the U.S. Military Academy at West Point, New York, headlined “Tactical Risk in Multi-Domain Operations.” He defines risk as:

Commander-approved actions taken in the course of planning and executing an operation designed to consciously mass effects in one area, thereby taking assets away from another, to develop an enemy weakness or take advantage of a battlefield opportunity focused on winning the battle or major operation at hand and securing a position of advantage for follow-on operations. 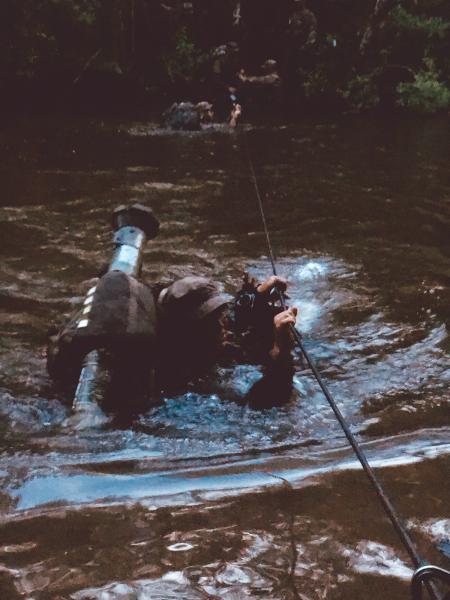 During a field training exercise in Florida, students of the 6th Ranger Training Battalion cross a river at night.
(Credit: Courtesy of Capt. Emmanuel Batara)

The Army focuses leader development through hands-on training in the operational force. This starts with a “train the trainer” concept, ensuring commanders have developed subordinate leaders to a higher level of proficiency than those they will instruct. This concept can be seen across individual and collective training events such as individual marksmanship training, situational tactical exercises and combined arms live-fire.

A controlled training environment enables commanders to provide opportunities for subordinates to make mistakes in an attempt to grow as leaders and develop trust in each other, according to Army Doctrine Reference Publication 6-22: Army Leadership.

Ranger School reduces risk for soldiers across the Army by developing competent leaders. Ranger-qualified leaders are not perfect practitioners, but they are habitual trainers. They understand that practice does not make perfect, but it does form habits. There is greater value in leaders emphasizing the right habits to soldiers through quality training than there is in adding control after control to prevent potential hazards. Quality training is the most effective method to mitigate inherent risk.

Controls are typically external measures implemented to prevent hazards from negatively impacting a mission outcome. However, external control measures, though sometimes easy to implement, enable the mindset of fighting not to lose while the hazard remains a risk. Quality repetitive training has a lasting effect on risk reduction and emphasizes a mindset of fighting to win, not merely preventing loss.

Leaders in the U.S. Army Training and Doctrine Command provide their experiential knowledge back to the Army through soldier development as instructors.

The Fort Benning, Georgia-based Airborne and Ranger Training Brigade, the 6th Ranger Training Battalion’s higher headquarters, provides two “products” for the Army: Ranger-qualified leaders and highly skilled Ranger instructors. The instructors at the training brigade constantly assess the inherent risk involved in small-unit tactical training in various environments while monitoring the well-being of Ranger students who are pushed to their physical and mental limits.

Senior instructors are also required to provide command and control of training, managing medical and logistical assets required to execute training. The third and final phase of Ranger School in Florida presents opportunities for some of the most austere training, as well as the riskiest.

A jumpmaster watches for the drop zone as Ranger students prepare to jump into a field training exercise conducted by the 6th Ranger Training Battalion at Eglin Air Force Base, Florida.
(Credit: Courtesy of Staff Sgt. (P) Patrick Walsh)

Senior instructors at the 6th Ranger Training Battalion eventually certify as primary instructors for command-and-control training days during a 10-day field training exercise at the culmination of Ranger School that includes swamp movements. These primary instructors will plan for their respective day’s training, to include medical assets, opposition force missions, air or ground transportation, and resupply coordination.

Before the field training exercise starts, primary instructors can execute the deliberate risk management process to provide tough but safe training for students. However, the environment of the swamp phase of Ranger School poses constant hazards that need to be addressed while continuing training.

For example, primary instructors will assess changing weather conditions as thunderstorms move into the region. They will simultaneously receive updates from the instructors walking with students in the field on their current locations and potential issues with any students. As the weather conditions change, bringing nearby lightning into the equation, primary instructors must determine where the student platoons can move to safely wait out a storm.

To add to this problem set, the students are paddling down a river surrounded by waist-deep swamps for 500 meters or more on each side. How will one be medically evacuated if a thunderstorm grounds medevac air assets?

Major decisions that require the commander’s input are presented with multiple options and their accompanied risks. Additionally, primary instructors present a timeline of decision or action, similar to a commander’s decision points during an operation. The primary instructors’ ability to display initiative as the battalion commander’s representative in the field and manage some of the highest-risk training in the Army sets them apart from their peers.

Instructors gain techniques in managing risk during training to provide experiences that will have lasting effects on soldiers instead of controlling hazards to prevent failure. Leaders at the 6th Ranger Training Battalion execute some of the highest-risk training throughout the year and provide two invaluable assets back to the Army—the Ranger-qualified leader and the Ranger instructor. Both types of leaders are willing to accept prudent risk instead of simply fighting not to lose.