Sgt. Augustus Maiyo led his fellow soldiers to snatch the top five places in the 32nd running of the Army Ten-Miler on Sunday, Oct 9.

“We were running together the whole time,” said Maiyo, a Kenyan native who is a member of the U.S. Army World Class Athlete Program, or WCAP.

According to Maiyo, most of the WCAP team stayed out in front the entire race. That allowed the team members to move to the finish line as one. Of the more than 35,000 runners who participated, none of the others came even close. 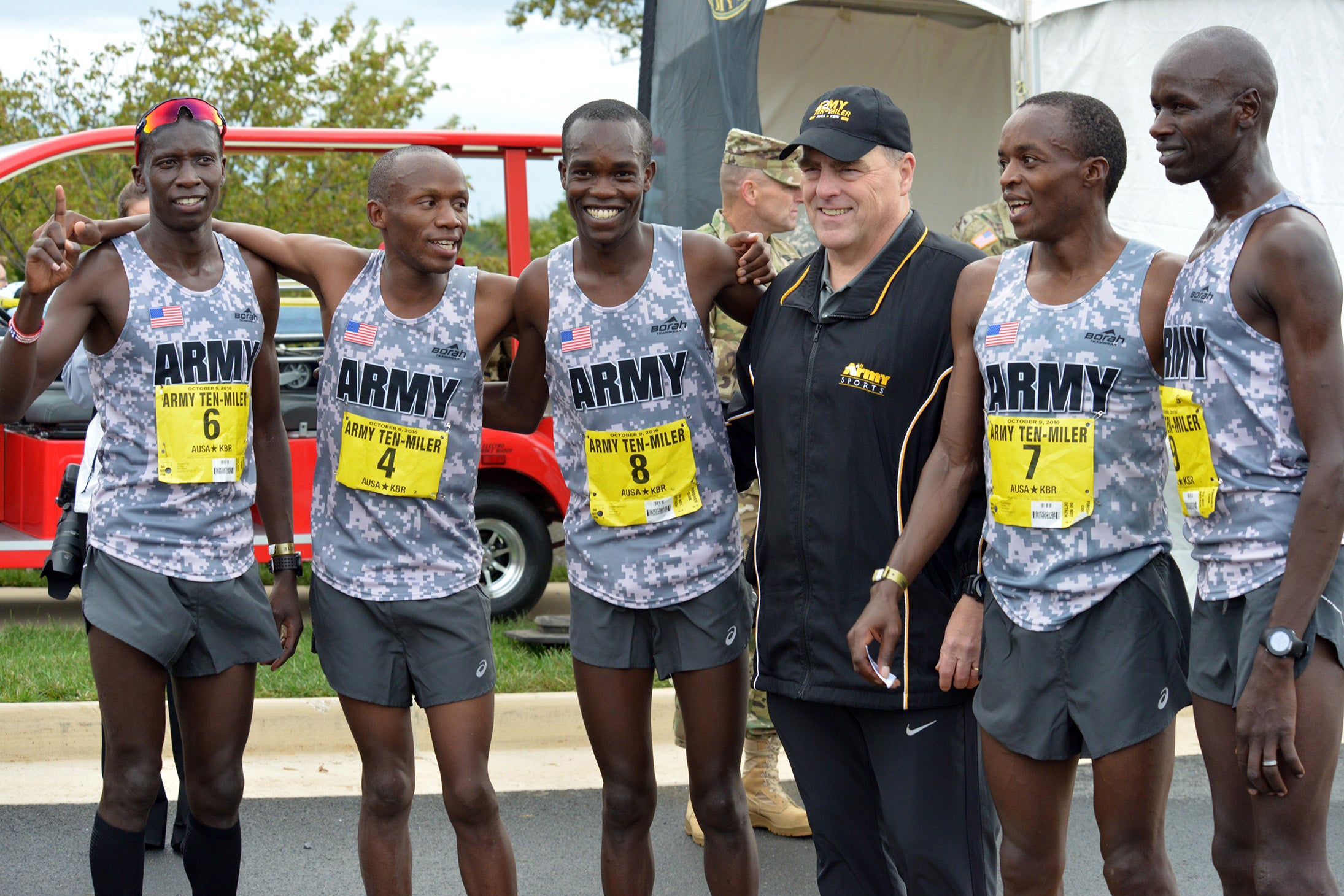 “It was a win for the Army,” Maiyo said.

Seconds before the start of the race, Army Chief of Staff Gen. Mark A. Milley had picked up a microphone and asked if the soldiers were going to win.

They raised their arms in a victory gesture and declared they would do it for the Army. A loud “Hooah!” followed from the racers, many of whom were soldiers or veterans.

Now, at the finish line, members of the team looked refreshed, having not even broken a sweat.

That was due to the stiff wind, rain and low temperatures, said fellow WCAP teammate Emmanuel Bor, who placed seventh. The announcer said the headwind at the start of the race was 18 mph and the temperature was 56 degrees Fahrenheit.

Some 100 wounded warriors, on various types of recumbent bicycles, some leg-propelled and some hand-propelled, as well as special wheelchairs, led the race.

Dave Gifford rode a hand cycle. He lost the use of both legs when a car struck him from behind while he was riding a motorcycle.

For Gifford, who served eight years on active duty in the Army and 20 in the Pennsylvania Army National Guard, this was his first year at the Army Ten-Miler.

He expressed gratitude to the Department of Veterans Affairs for helping him recuperate from his injuries and providing him with the hand cycle, which has allowed him to exercise and connect with other veterans.

Gifford said he still visits his old unit in Pittsburgh, the 128th Brigade Support Battalion. He and other vets sell hot dogs and hamburgers to raise funds for morale activities for the soldiers and family members of the 128th.

He said he is still receiving therapy at Bethesda for a leg infection that left him unable to walk after he retired from the Army in 2002 as a sergeant first class.

Thomas said he does a tremendous amount of volunteer work with his church, 1st Mount Zion, in Dumphries, Va. He also volunteers at the VA, performing clerical duties. He said the Walter Reed National Military Medical Center and the VA have the best surgeons in the world.

Thomas encouraged other wounded, ill or injured veterans to get involved in sporting activities like this one and volunteer their time.

A few minutes before the start of the Ten-Miler, several Army leaders offered remarks, encouraging the runners and talking up the Army.

Milley assured the runners who assembled at the start line that they “represent all that’s good about America.” He noted that the event’s 35,000 runners came from all 50 U.S. states, as well as 54 countries.

Under Secretary of the Army Patrick J. Murphy, who ran in a later wave of the race, said the Ten-Miler had raised $6 million that will go toward funding soldier and family programs.

He then added some swagger, predicting that in 62 days, Army would beat tNavy at their annual rivalry.

Sgt. Maj. of the Army Daniel A. Dailey said, “It’s a great day to be a soldier. If you can’t pass me, you’re not trying hard enough.”

Dailey and fellow sergeants major formed a race team that beat the other Army sergeants major teams, coming in at 4:43:49. Dailey had enough energy after the finish to enter an impromptu pull-up competition with drill sergeants.

The top three winners of the 2016 Army Ten-Miler include:

Throughout the world, soldiers showed their support for the Army and each other by running shadow Army Ten-Milers.

The 2017 Army Ten-Miler will take place on Oct. 8, the Sunday before the opening of the Association of the United States Army’s Annual Meeting and Exposition, Oct. 9 – 11, at the Walter E. Washington Convention Center in Washington, D.C.