From the rising nuclear threat posed by North Korea to Russian cyber hacks, from migration to terrorism to climate change, the U.S. is no longer shielded from trouble, as it once was, by two oceans and long distances.

“The homeland is less and less a sanctuary,” said Robert Salesses, deputy assistant secretary of defense for homeland defense integration and defense support of civil authorities.

Thus, a role the military has always had but has been long overshadowed is re-emerging: homeland defense.

Salesses spoke Oct. 5 at the Association of the U.S. Army 2016 Annual Meeting and Exposition during an AUSA Institute of Land Warfare symposium on homeland security.

He said the Army is involved daily in homeland missions ranging from augmenting border defenses in the Southwest to planning emergency responses to natural and man-made disasters.

Indeed, as the symposium was being held, the Army National Guard and Army Reserve were busy preparing for an emergency response to a hurricane that threatened the southern East Coast.

The Army is better prepared than ever before to respond to domestic emergencies, Salesses said, and it’s not just forest fires, hurricanes and earthquakes. 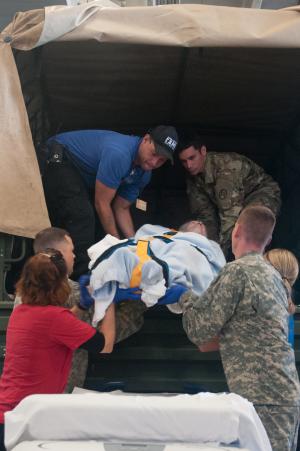 Typically, when the National Guard responds, it operates under the command of a state governor.

The Army contributes to border security in ways less obvious than patrols at checkpoints and crossings, said Kevin McAleenan, deputy commissioner of the U.S. Customs and Border Protection.

For example, soldiers perform aerial surveillance and intelligence analysis in support of the CBP, he said.

That includes soldiers learning to fly unmanned aerial vehicles at a training range near the border.

While training, they also provide CBP with aerial imagery and other intelligence, said Lt. Gen. Jeffrey Buchanan, commander of U.S. Army North and Fifth Army. Based at Fort Sam Houston, Texas, Army North is the military’s designated force for protecting the U.S. homeland.

Much of Army North’s mission is to support civilian authorities in response to emergencies.

During domestic disasters, the Federal Emergency Management Agency and state and local authorities remain in charge, but they rely heavily on the military for personnel as well as helicopters, trucks and other equipment.

Ties to the military are especially close for CBP, McAleenan said.

The agency has adopted military equipment such as aerostats and night-vision goggles for border surveillance, he said.

But it also relies on the military for personnel.

Fully 30 percent of the agency’s employees are former military members, McAleenan said, making a pitch to an auditorium full of uniformed Army personnel that the agency is hiring pilots, border patrol agents, intelligence analysts and others.

William Matthews is a freelance writer who specializes in military and technology issues. In addition to writing for magazines and websites, he has been a staff writer for Defense News, Federal Computer Week, Army Times Publishing Co. and several newspapers. He is based in suburban Washington, D.C.