As a combat surgeon in both Iraq and Afghanistan, Army Reserve Lt. Col. David King was all too familiar with treating injuries inflicted by improvised explosive devices. So it was a horrifying twist of fate when one of the largest mass-casualty events he would face in his career occurred in his own community. He had just completed the 2013 Boston Marathon and was returning home when two explosions prompted the trauma and acute care surgeon to quickly redirect to Massachusetts General Hospital. Within 90 seconds of arriving, King was treating devastating shrapnel and blast injuries sustained by runners and bystanders and leveraging important advancements in military trauma through 30 consecutive hours of operating procedures.

Enhancing their value to the force, citizen-soldiers like King are highly educated and professionals in their civilian careers. They are our doctors, lawyers, academics, scientists, engineers and information technology specialists on the leading edge of their fields—a new generation of soldiers who grew up with technology in their hands, practice it in their professions, and leverage it while in uniform. Today, 75 percent of the doctorate degrees in the total Army and half its master’s degrees are found in the Army Reserve.

The Army’s focused investment in the development of specialized capabilities and expertise for a challenging and complex global environment is well-served by the operational Army Reserve. Programs such as the Army’s Training with Industry that provide exposure to managerial techniques and industrial procedures within corporate America reflect the need for civilian-sector skills, many of which are also being maintained and enhanced by citizen-soldiers in occupations outside the Army Reserve. 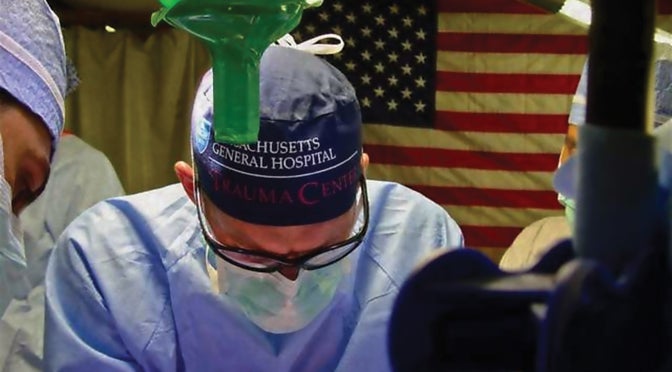 Army Reserve Lt. Col. David King treated numerous blast wounds as a combat surgeon in Iraq and Afghanistan. He and his team operated on casualties for 30 hours after the 2013 Boston Marathon bombing. (Credit: U.S. Army)

Regional instability, violent extremism, proliferation of weapons of mass destruction and any number of other factors predict a future global security environment even more complex and potentially dangerous than it is today. Continued investment in the readiness of citizen-soldiers ensures continued access to the specialized training and cutting-edge capabilities of the premier lifesaving, life-sustaining force for the Army and the nation.

The Army Reserve is both an Army component and a single command, with a congressionally authorized strength of 205,000 soldiers and 12,600 civilians. Flexible and tailorable, we can quickly scale our organizations to meet a variety of missions. 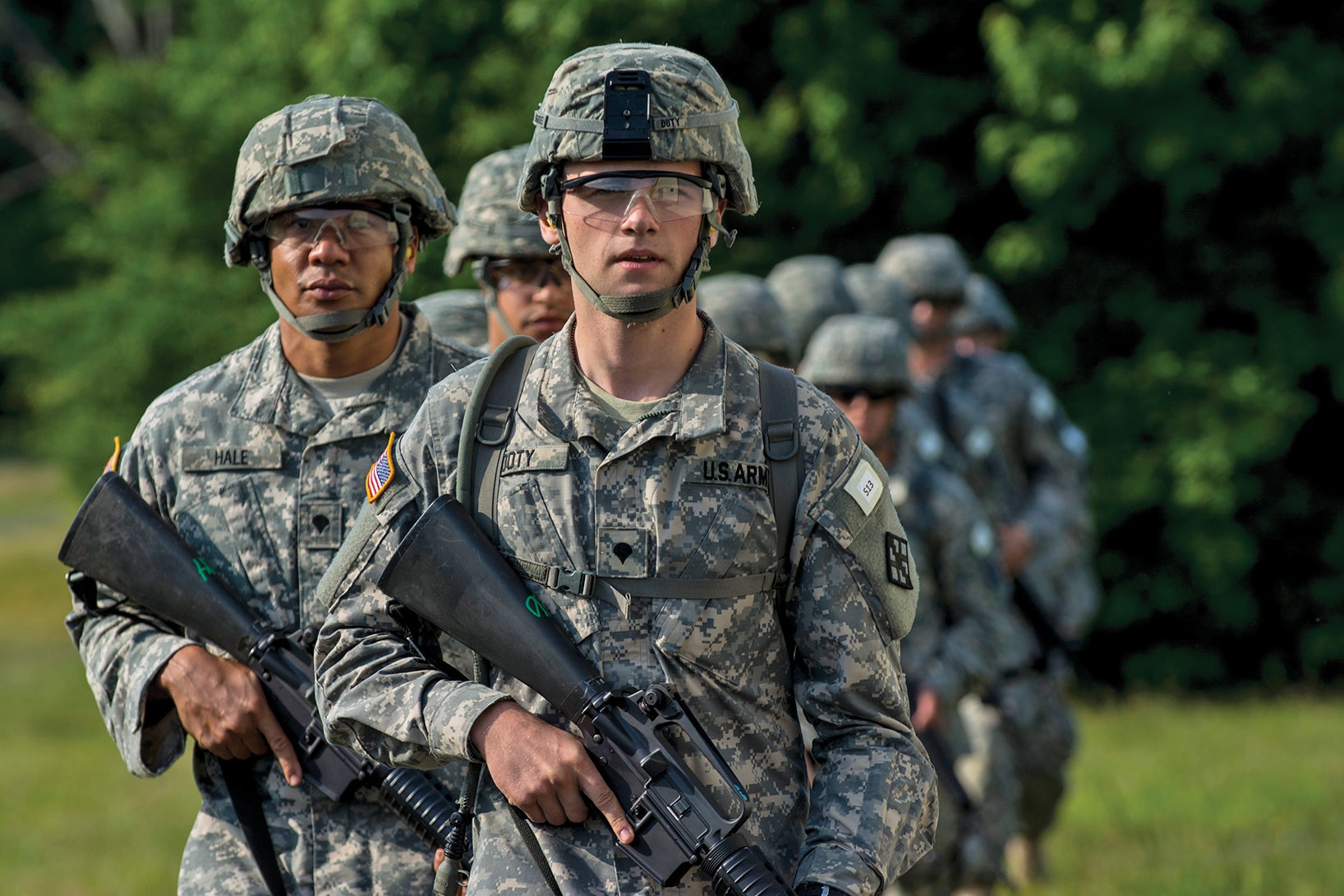 Thirteen years of steady demand for enabling capabilities have resulted in an Army Reserve fundamental to the success of the total Army, in full partnership with the active component and Army National Guard.

The Army Reserve is the most efficient and cost-effective reserve component, providing 20 percent of the Army’s trained soldiers and units for less than 6 percent of the total Army budget. We also have the lowest ratio of full-time support to end strength in DoD—about 13 percent. Traditional Army Reserve soldiers, with full-time jobs in public and private sectors, keep their technical skills sharp at little or no cost to the Army.

As new capabilities are needed to meet emerging threats, we are positioned to adapt and lead with next-generation skills. In the currently emerging and evolving cyber operations domain, more than 3,600 Army Reserve cyberwarriors are on the cutting edge of technologies in both the public and private sectors. As threats and technologies change, the civilian skills Army Reserve soldiers develop will enable our formations to provide a highly specialized talent pool to meet current needs and lead early experimentation and utilization of emerging capabilities. We are also committed to building 10 cyberprotection teams and an Army Reserve Cyber Opposing Force of more than 400 highly skilled cyberwarriors to support the joint U.S. Cyber Command.

Our combat-tested and cost-effective capabilities include theater-level transportation and sustainment, pipeline and distribution management, railway and water terminal operations, and other high-demand career fields. Put simply, at a critical juncture in history, the Army Reserve adds operational flexibility and strategic depth to prevent, shape and win across the full range of military operations. 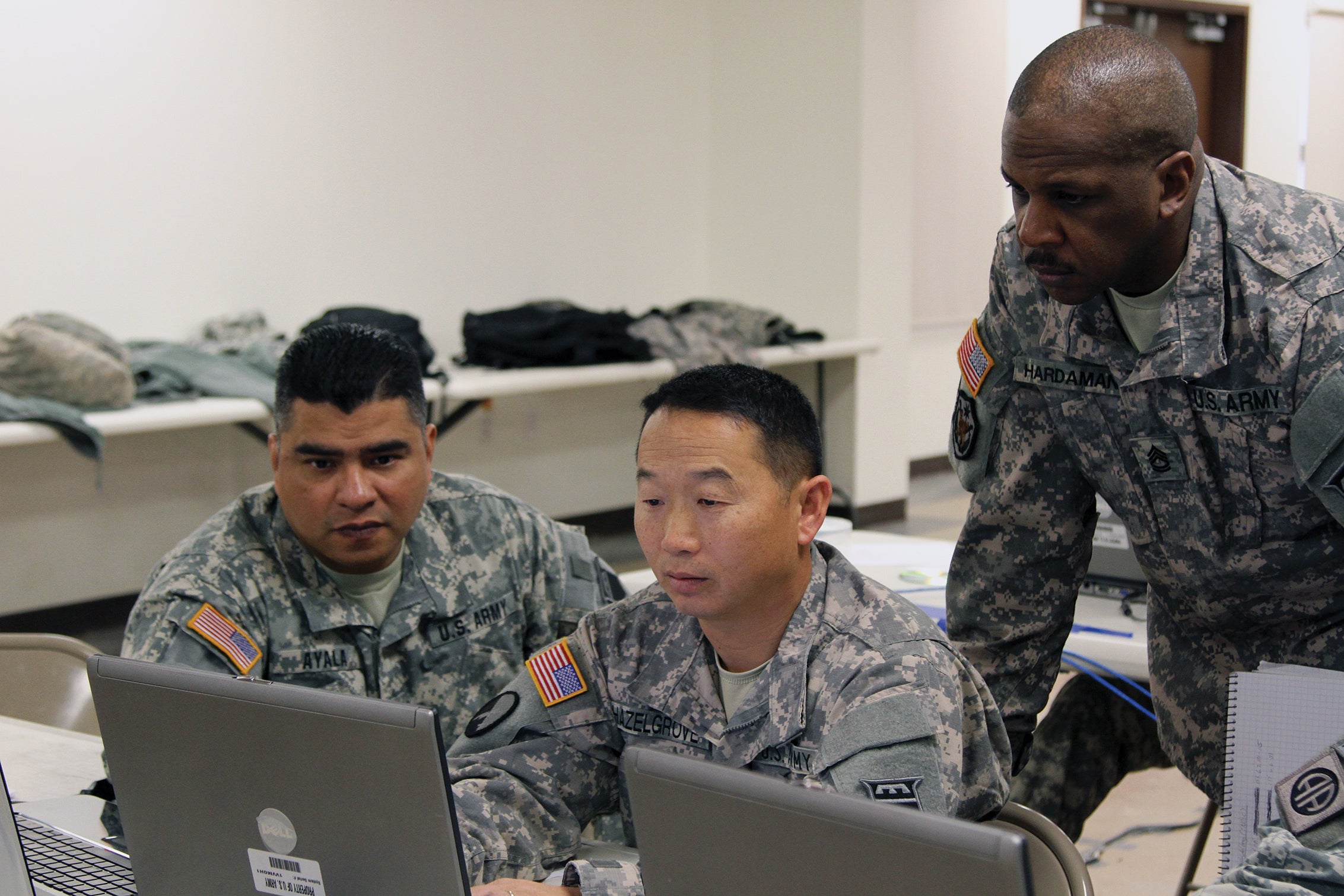 In 2012, Section 12304a of the National Defense Authorization Act provided new authority for the service reserve components to assist citizens and communities at home during domestic emergencies. The Army Reserve’s lifesaving and life-sustaining capabilities, essential to missions abroad, are now available to support domestic authorities, serving as an optimum, dual-use force for preserving property, mitigating damage and saving lives here at home.

We provide all of the Army’s emergency preparedness liaison officers and half of those across DoD as a whole. These Army Reserve soldiers serve as conduits, maintaining communication and coordinating assistance among DoD, federal, state and local governments, and nongovernmental organizations during emergencies. In addition to keeping track of Army Reserve assets in their states and regions, they are the DoD subject-matter experts on capabilities, limitations and legal authorities. 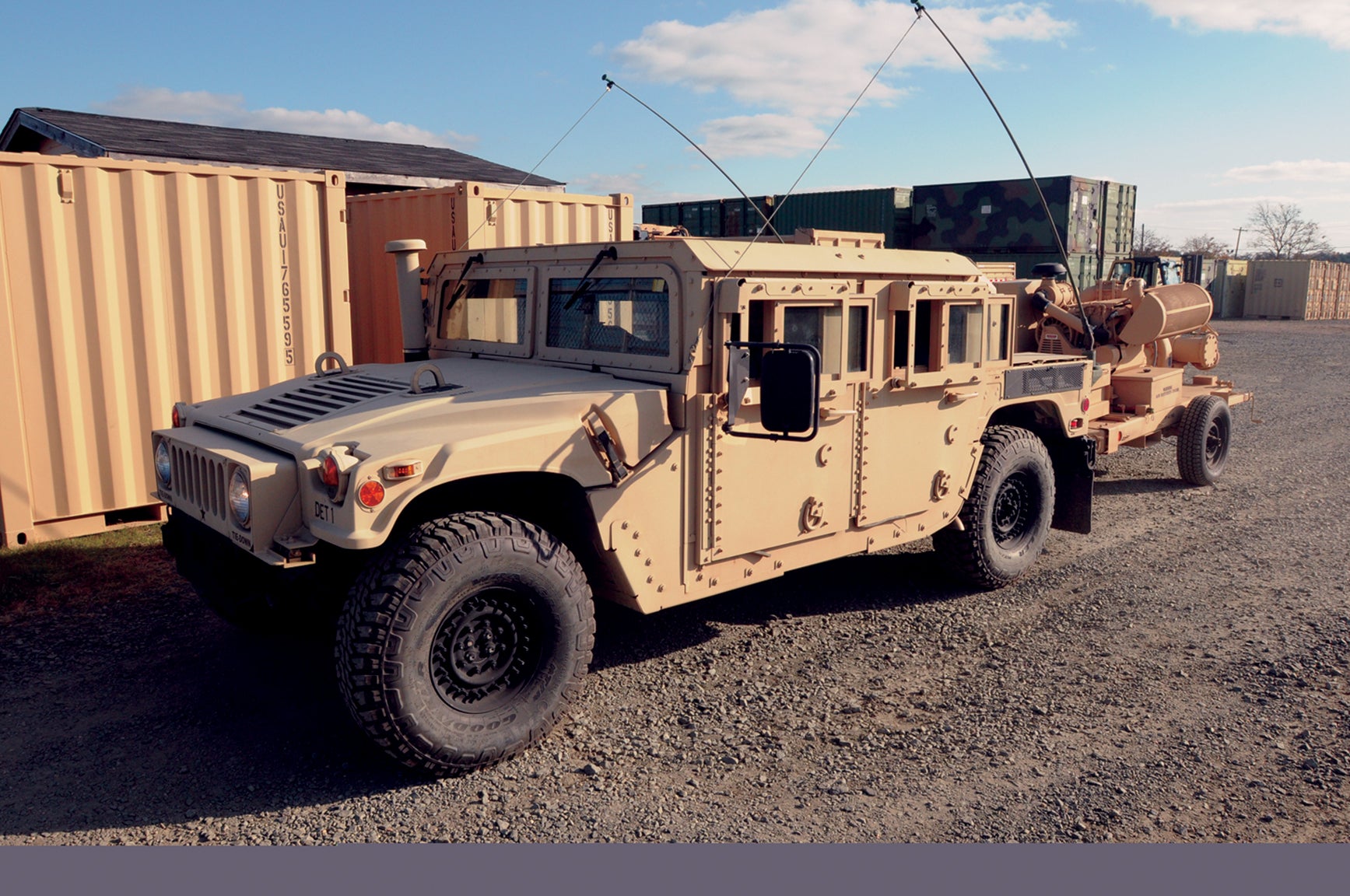 The Army Reserve is also available to support combatant commanders’ requirements for theater security cooperation exercises and missions to prevent conflict and shape conditions in their geographic areas. This is a particularly cost-effective way to maintain a robust and ready operational reserve while mitigating risks posed by force reductions. Our expeditionary sustainment commands deploy to locations devoid of infrastructure and quickly open seaports and airports, while our logistics and supply chain personnel are experts at moving lifesaving materiel and services into affected areas.

The Army Reserve and corporate America share a mutual interest in enhancing the career and leader development of citizen-soldiers, whose civilian skills and military capabilities make them a sought-after talent pool for both sectors. This initiative will leverage partnerships with industry to help sustain and improve individual, leader and unit readiness. We call this the Private Public Partnership Initiative, or P3i, and we’ll unveil more in the upcoming year.

The Army Reserve is also actively seeking battle-tested soldiers leaving active service, affording DoD and the nation an opportunity to capitalize on military members who truly become soldiers for life. We are offering exciting military career tracks that complement the career choices of transitioning soldiers. This strategy helps the Army keep faith with its soldiers and families, and it preserves the taxpayer investment in trained and ready soldiers. 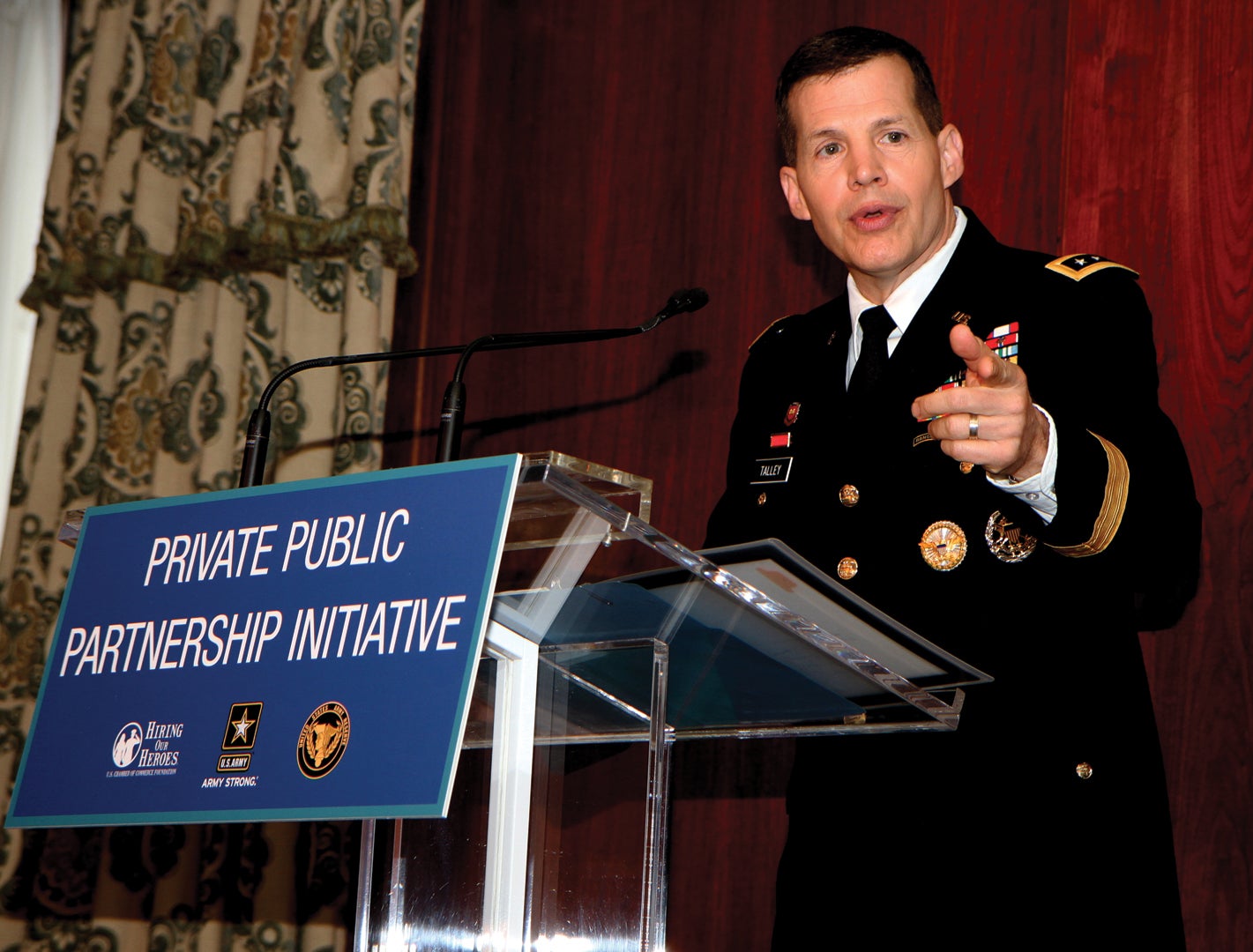 Other programs include the Yellow Ribbon Reintegration Program, a 24/7 outreach call center, and a warrior transition program focused on the wounded, ill or injured and their treatment, rehabilitation, and successful reintegration.

Our programs support resilience and allow access to confidential resources. These are important factors in our two most pressing concerns: preventing the tragedy of suicide and eradicating the scourge of sexual assault and harassment.

Recent statistics show that more than half of the Army Reserve soldiers who committed suicide in recent years had never deployed; the vast majority of the stressors leading to suicide were associated with relationship and financial challenges. As we continue to struggle with the tragedy of suicide in our ranks, we are emphasizing vigilance through proactive prevention and intervention training. Our 36 newly assigned prevention program managers will increase access to one-on-one counseling, with an emphasis on reducing the stigma associated with personal, family or behavioral health issues.

Sexual assault is a crime, and we are strengthening our ability to track, investigate and prosecute offenders. We are increasing prevention efforts through a 24/7 hotline, with 50 military and civilian personnel dedicated to victim support at commands throughout the Army Reserve. Our most successful and enduring resource, Fort Family, is available around-the-clock as a confidential, one-stop shop for prevention and reporting efforts.

Army Reserve Lt. Gen. Jeffrey W. Talley has served as senior leader for the U.S. Army Reserve since 2012. Previously, he was commanding general, 84th Training Command at Fort Knox, Ky. During more than 31 years of active and reserve service, he has commanded units at every echelon, from platoon to division-level, with duty in Korea, Kuwait, Iraq and the U.S.