The nation’s foundational force for more than 239 years, the U.S. Army has defended America’s freedom, prosperity and way of life. There is no stronger symbol of American resolve than boots on the ground, and I have no doubt that the Army and its landpower will continue to be a critical, strategic element of national defense in the foreseeable future.

That doesn’t mean the Army isn’t facing challenges, some of which are very serious. While the importance of its role as a critical hedge against an uncertain future is clearly apparent in today’s security environment, today’s Army leaders are being asked to do more with less. They’ve been placed in a situation of cutting the size of the Army while keeping active, National Guard and Army Reserve forces prepared for full-spectrum operations while balancing today’s readiness and quality-of-life needs with future recapitalization and modernization.

The Association of the U.S. Army is committed to ending the scourge of sequestration, an irresponsible solution to our fiscal crisis that puts our nation at risk through its indiscriminate, disproportionate reductions. Sequestration causes the Army to have untrained soldiers, incrementally untrained units, unmaintained facilities and hardware, fewer Army civilians, and cancelled military schooling. It deprives defense leaders of the funding certainty and the financial flexibility to properly structure, fund and maintain our armed forces.

Reduced budgets and the threat of sequestration create a sense of uneasiness in the ranks, and those fears are fueled by politicians willing to shut down the federal government rather than compromise. Real-life impacts of the postwar drawdown have led to tighter reenlistment standards and involuntary separation or retirement. With soldiers still engaged in Afghanistan, some of those termination notifications were delivered during deployments when people had their lives on the line for what clearly, at the moment, seemed like an ungrateful nation. 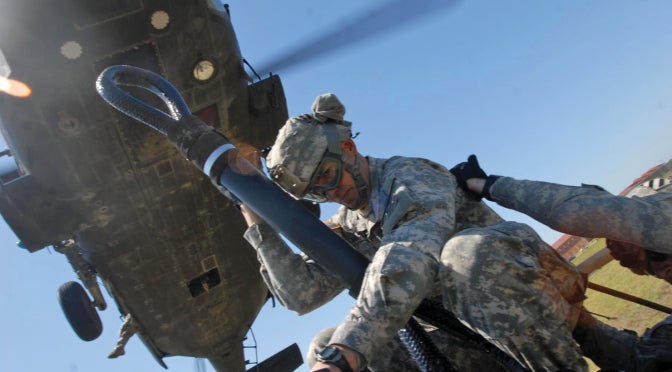 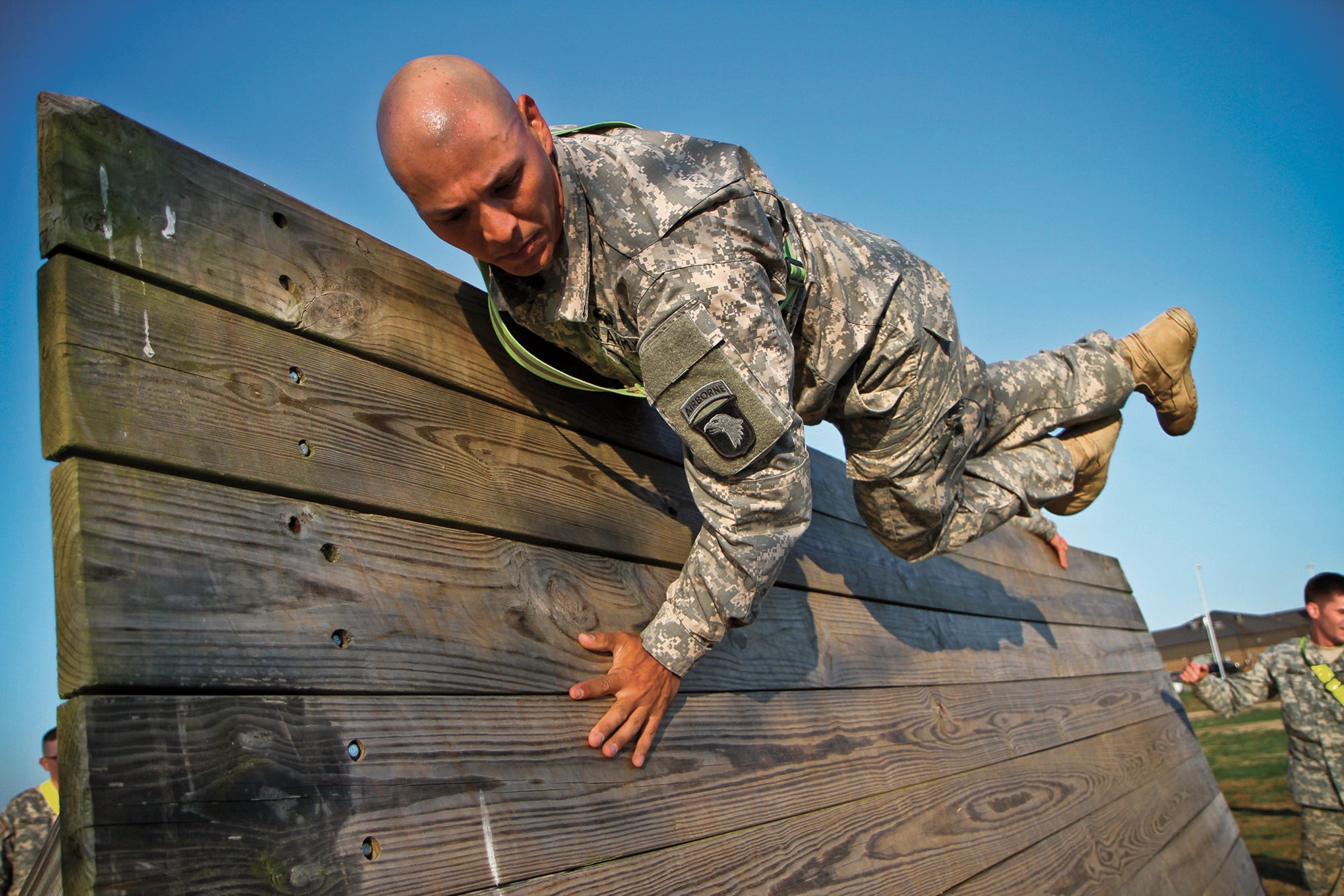 AUSA is committed to ensuring that Congress fund both defense and veterans’ budgets to provide appropriate pay and benefits that are an essential offset for the unique demands, harsh conditions and sacrifices inherent in military service. DoD officials are right to contend that military pay has drastically increased, but this is not a simple story. Throughout the late 1980s and 1990s, Congress capped military pay below private-sector wage growth. This resulted in a 13.5 percent gap between military and civilian pay and a serious retention and recruiting crisis by the early 2000s. In the past decade, Congress has worked hard to fix the pay gap to ensure military pay kept pace with the private sector, but now history is repeating itself. The fiscal year 2015 administration budget submission keeps pay caps in place—not just for a second straight year but for six straight years. It took Congress 10 years to make military pay competitive with the civilian sector again. It would be travesty to undo it.

AUSA and its members, as well as the American people, must ensure that our elected representatives understand that they cannot delay the difficult decisions that will end the specter of sequestration. They must adequately and predictably fund a robust military force for the defense of the nation.

The nation expects the Army to be globally responsive and regionally engaged, and to prevent conflict by maintaining credibility based on capacity, readiness and modernization. The Army shapes the international environment by sustaining strong relationships, building partner capacity and facilitating strategic access. It applies Mission Command and combined-arms capabilities to dominate the environment and win the nation’s wars decisively when called. Answering that call with loyalty, courage and trust is the bedrock of the profession of arms.

The nation requires a global joint force that will assure, deter and compel to advance or protect its interests. Security and war are always fundamentally about people, culture and decisions—entities that constitute a human domain. The role of strategic landpower is to shape this domain and prevail throughout it, creating conditions that stabilize people’s daily dealings with one another and generate momentum to bring about the nation’s strategic objectives.

In addition to their global roles, the Army’s regionally aligned forces deliver rapidly accessible, tailorable and scalable force packages for combatant commanders, assuring security and stability by remaining capable across the full spectrum of operations in every domain—from humanitarian assistance and disaster relief missions to stability operations to major combined-arms campaigns. The Army contributes more than 40 percent of the joint force’s foundational activities, including signal, engineer, missile defense, provision of ammunition, logistics and intelligence support, and more than 60 percent of the joint force’s theater medical support. 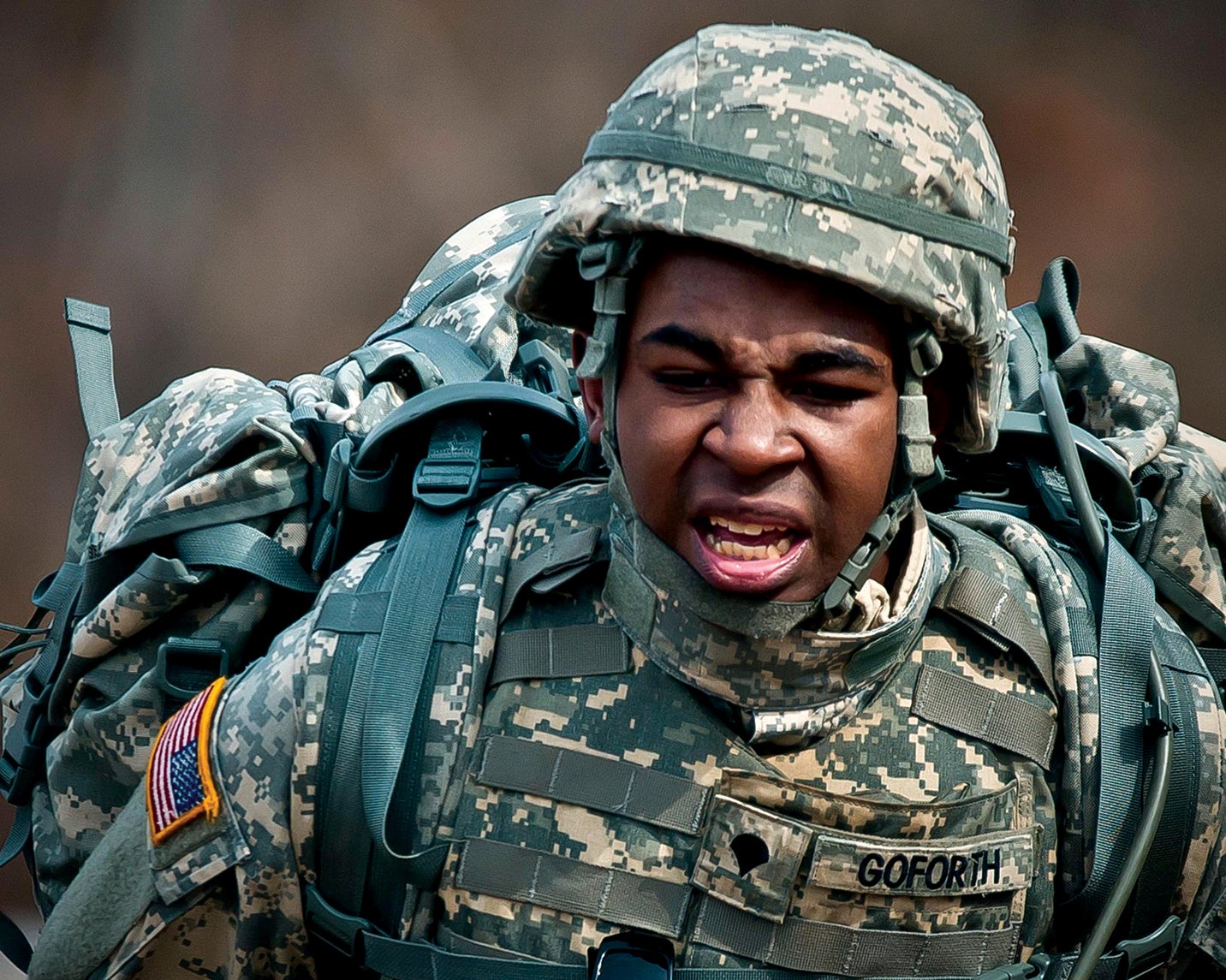 Since early 2012, America’s national security apparatus has executed a rebalance toward the Asia-Pacific Theater—where the Army has already maintained a permanent, continuous presence for more than 100 years—even as the nation remains invested in the Middle East. As the Army transitions in structure and size to support the joint force of today and tomorrow, it is aligning with other regions, such as Europe and Africa, to ensure consistent engagement with populations. Developing relationships with people across the globe gives them confidence in America’s commitments, stabilizes complex interactions, keeps the Army abreast of emerging issues and guarantees that soldiers are ready if contingencies arise.

The capability to project strategic landpower to the places where it is required is a complex joint mission. As the force rebuilds credible response options in support of combatant commanders after years of rotational deployments, reinvestment in strategic mobility is paramount for mitigating strategic surprise. Future crises, large or small, will demand both ongoing engagement and the rapid responsiveness of flexible American soldiers.

Remaining ready to credibly respond to emerging and future contingencies requires consistent, timely and predictable support to ensure reversibility and expansibility. Many vital capabilities provided by the Army require substantial lead times to construct. For example, it takes approximately 32 months to build a new brigade combat team, and it takes nearly three years to produce the sophisticated radar employed by the Patriot air defense system. Indeed, any shift in priorities for the defense industrial base is expensive and time-consuming. In terms of human capital, it takes five to eight years of experience to develop an NCO, and it takes 15–18 years to prepare an officer to competently lead a battalion or brigade. Today’s international crises, however, emerge at the speed of the Internet; it is therefore crucial for the Army to be sustained in its ability to reverse its drawdown or expand rapidly if necessary.

The Army’s soldiers and families have endured significant challenges throughout more than a decade of continuous war in austere environments. As of August, nearly 540,000 soldiers—active, Guard and Reserve—are serving on active duty around the world. Unfortunately, the future fiscal environment is nearly as challenging as the myriad threats confronting the nation from the outside. The Budget Control Act of 2011 cut defense resources by nearly $500 billion for the upcoming decade. Additional sequestration cuts are chopping away nearly $500 billion more in a devastating, untargeted manner. They have already done irreversible damage to training, education, readiness, leader development, science and technology research, the industrial base, and procurement of modern vehicles and weapons. 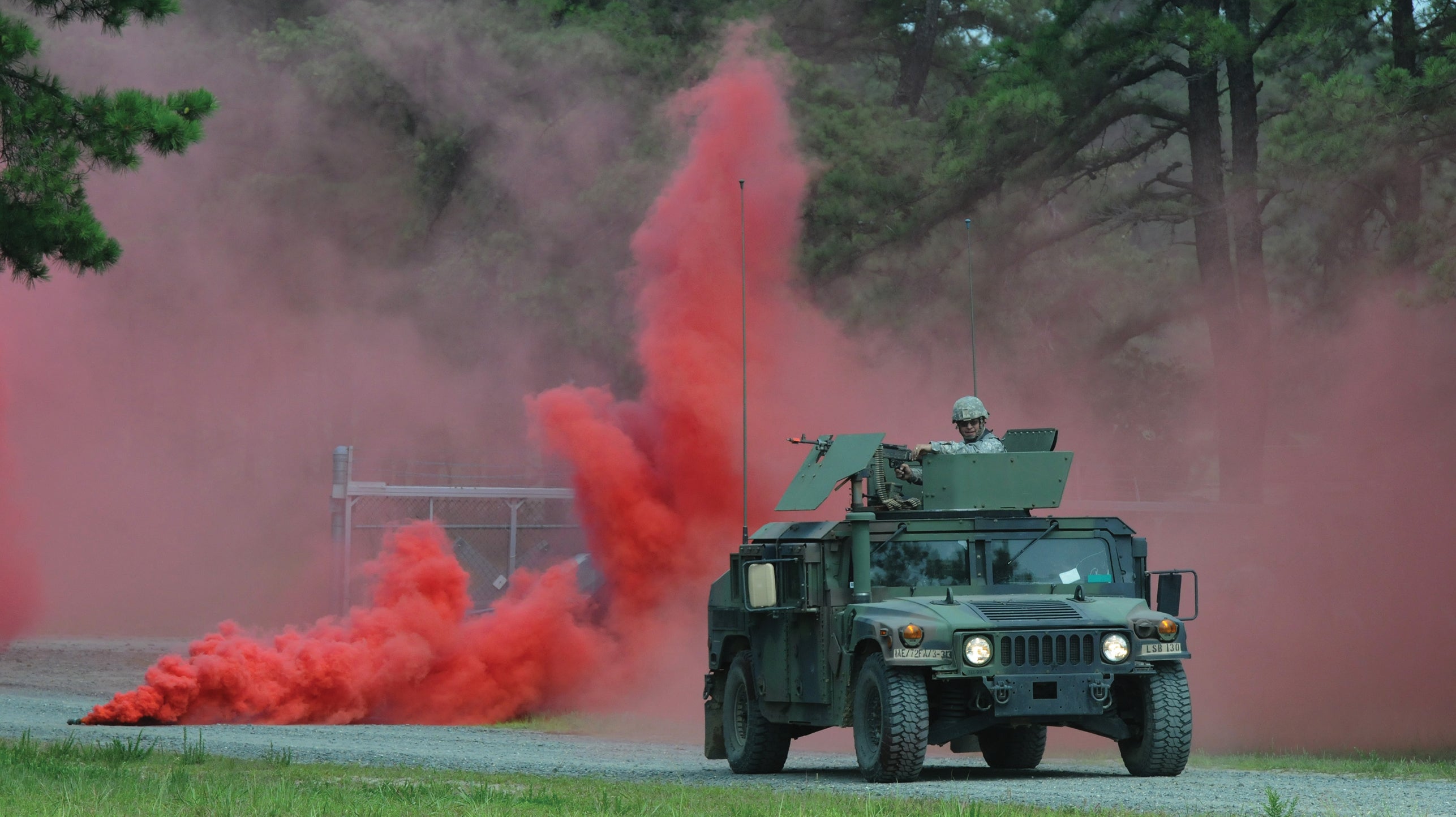 A Humvee rolls through a smoke screen during Operation Sustainment Warrior 2014 at Joint Base McGuire-Dix-Lakehurst, N.J. (Credit: U.S. Army) 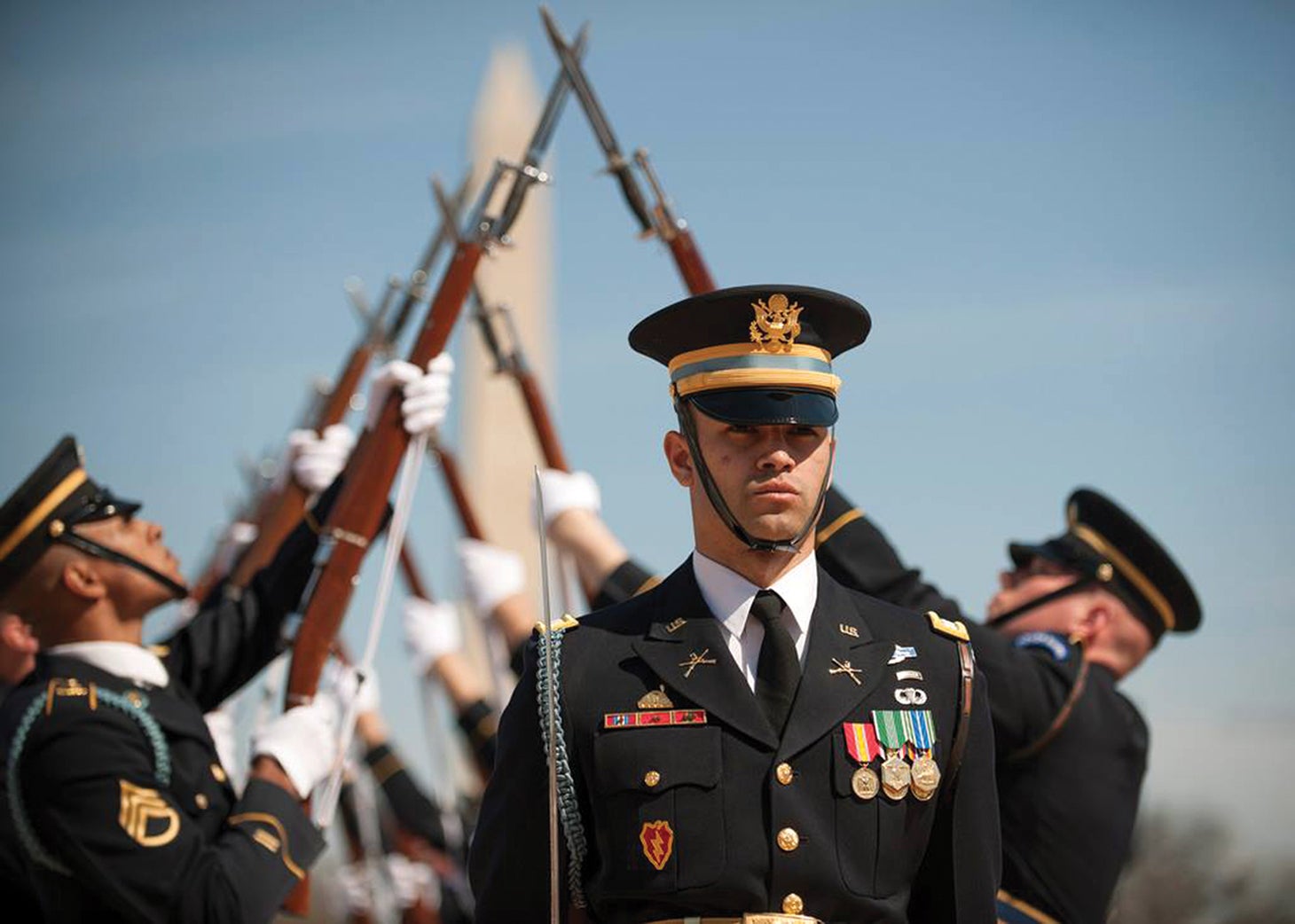 Even though defense makes up less than 20 percent of the federal budget, it received 50 percent of the sequestration cuts. These indiscriminate and disproportionate reductions are creating unnecessary and unacceptable levels of strategic risk; in fact, Army Chief of Staff Gen. Raymond T. Odierno recently stated that the Army will not have the manpower to fully execute the nation’s defense strategy if sequestration continues into fiscal year 2016 and beyond. It is imperative that Congress restore its full support for a finely tuned balance among military end strength, modernization and readiness. In addition, taking care of the families of fallen soldiers, wounded warriors, and the Army’s past, current and future generations of veterans is nonnegotiable.

The Army must be sized in accordance with combatant commanders’ requirements as well as the Army’s Title 10 responsibilities to organize, equip and train forces for worldwide missions. With a smaller active component on the horizon, assured access to trained and ready reserve forces will be crucial. The Army National Guard and the Army Reserve have acquired significant experience over the past decade that must be preserved through continued operationalization and integration with the active component in order to provide the nation with diverse and sustainable capabilities.

The uncertainties of today’s international environment, the rapid evolution of new military technologies, and the endurance of viable threats to Americans and their way of life challenge the Army’s ability to remain prepared for any contingency and maintain its dominance over potential adversaries. The Army’s Title 10 responsibility, however, is to stand ready to conduct both prompt and sustained combat operations on land, and it has proven time and again that its trusted professionals can adapt to respond to any crisis at any time anywhere in the world. It is the strategic foundation of the nation’s defense and provides a seamless continuum of options for policymakers. In order to ensure the Army can continue to meet the nation’s expectations, it must be properly resourced now and in the future.