Although the M1A2 Abrams remains one of the world’s premier main battle tanks, the Army has tried to develop a replacement that could provide the same or greater lethality and crew survivability with a much lower weight to make it easier to get to the fight and to be more mobile on the battlefield. Those efforts have failed either because existing technology was unable to produce the desired combat power and protection at a substantially lower weight, or because the cost of combining those historically countervailing features would have been too great.

The need for a lighter armored vehicle has grown as the Army’s primary focus has swung sharply from the Cold War requirement for forward-based heavy forces prepared to counter a Soviet assault into Western Europe to being able to rapidly deploy combat power from U.S. bases in response to an emerging threat in some distant location.

History of Heaviness
The quest for lighter main battle tanks, however, runs directly contrary to the history of armored combat vehicles, which has been dominated by the classic contest between stronger defenses against more powerful offensive weapons.

In an August 2014 article on Gizmag.com, David Szondy writes, “Over the years, the guns used to fight tanks became bigger and were then augmented with rockets and missiles, and tank designers responded with thicker armor, composites like Chobham, reactive armor, and even electric countermeasures to detonate warheads before they make contact. 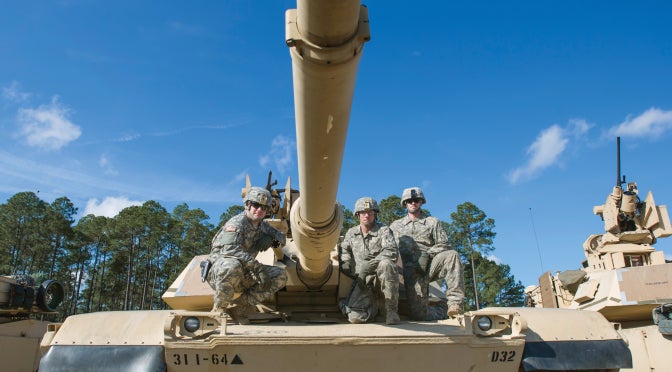 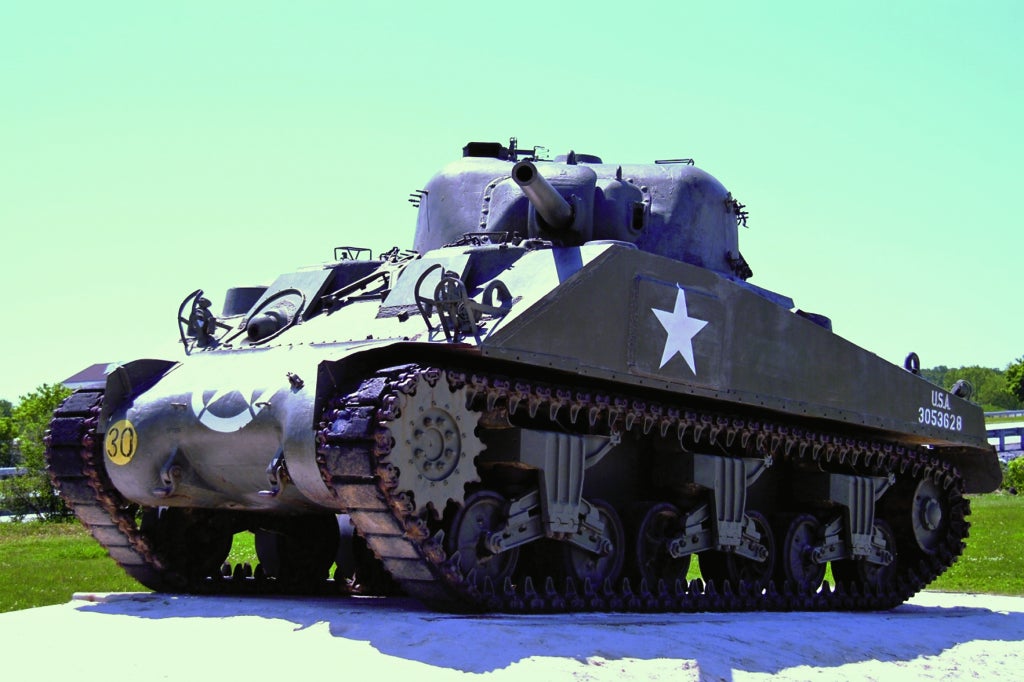 “The result of this is a spiral of larger weapons, leading to larger tanks, leading to larger weapons until the mainline tanks of today have become behemoths so large they can only travel on certain roads and bridges, are very difficult to deploy in a timely manner, and are so expensive to develop, build, and maintain that only fighter planes rival them in cost. If this goes on, tanks could one day become so heavy and costly that they’ll no longer be practical to field.”

History validates this analysis, with U.S. tanks growing from the 7-ton French FT-17 the Army borrowed in World War I, through the middleweight M4 Sherman in World War II, to the current M1A2, which grosses at around 70 tons fully loaded for combat.

The exponential jump in the power of buried improvised explosive devices in Iraq and Afghanistan produced another demand for heavier vehicles, answered with the ponderous 18-ton MRAP troop transports to replace up-armored Humvees.

FCS was to produce a family of highly mobile armored vehicles, including a tank, that would weigh about 20 tons so it could be carried in a C-130. The vehicles were also to employ a network of sensors to help avoid being hit and a combination of lighter armor and active protection systems to shield the crew if stuck.

The FCS-proposed tank was the XM1202 Mounted Combat System, which would have had a 120 mm cannon like the Abrams but a crew of only two instead of four.

As is often the case in complex defense programs seeking revolutionary improvements, however, FCS struggled with schedule delays, technology gaps and soaring cost. The Government Accountability Office, other federal watchdog organizations and key congressional panels faulted the program for immature technology, excessive cost and inability to meet some of the crucial requirements. The projected weight of the Mounted Combat System, for example, had jumped to about 30 tons, making it too heavy for the C-130.

With all those problems and downward pressure on the defense budget, then-Defense Secretary Robert M. Gates cancelled FCS in 2009 along with a host of other programs. The Army tried to save elements of the FCS concept, including an effort to develop a new infantry fighting vehicle to replace the M2 Bradley, but the proposed Ground Combat Vehicle ran into similar problems, including a weight that some analysts estimated as high as 70 tons. When Congress slashed the funding in the fiscal year 2014 defense budget, the Army cancelled the GCV.

The Search Continues
The Army has given up, at least for now, on trying to build a lighter tank, but it is hoping to develop a replacement for the Bradley under a program called the Future Fighting Vehicle, according to Lt. Gen. Michael E. Williamson, principal military deputy to the Assistant Secretary of the Army for Acquisition, Logistics and Technology.

“If you took a look at what we were going to do with the Ground Combat Vehicle, we were looking to leverage some of the things we learned during the Future Combat System,” Williamson said. “So what we’re going to do over the next two years is we’re going to look at whether there are exciting new technologies that have the ability to mature very quickly to get a TRL, technology readiness level, that’s acceptable. And that’s what we want to incorporate into the Future Fighting Vehicle.”

The quest for a lighter tank continues, however, in other forms.

The Defense Advanced Research Projects Agency (DARPA), after trying to stimulate industry’s interest in developing revolutionary protective technology in its Armor Challenge, has started a bolder effort to shrink the size and weight of tanks: the Ground X-Vehicle Technology (GXV-T) program. Because improvements in anti-armor technology are coming faster than those in armor protection, DARPA is seeking a tank designed for extreme maneuverability.

The release said the program seeks technologies that reduce the focus on armor with the goal of making tanks 50 percent smaller with crews half the present number, able to move at twice the current speed, capable of operating over 95 percent of the terrain, and harder to detect and engage. DARPA said it hopes to see the technologies emerge in two years.

Light at the End of the Tunnel?
A perhaps more achievable effort is underway at the Army’s Maneuver Center of Excellence at Fort Benning, Ga. Called the Mobile Protected Firepower (MPF) program, it is “an effort to provide a capability back into the airborne combat team, principally to support forcible entry operations,” said Michael N. Smith, the science and technology advocate from the U.S. Army Tank Automotive Research, Development and Engineering Center, who is working on the project. 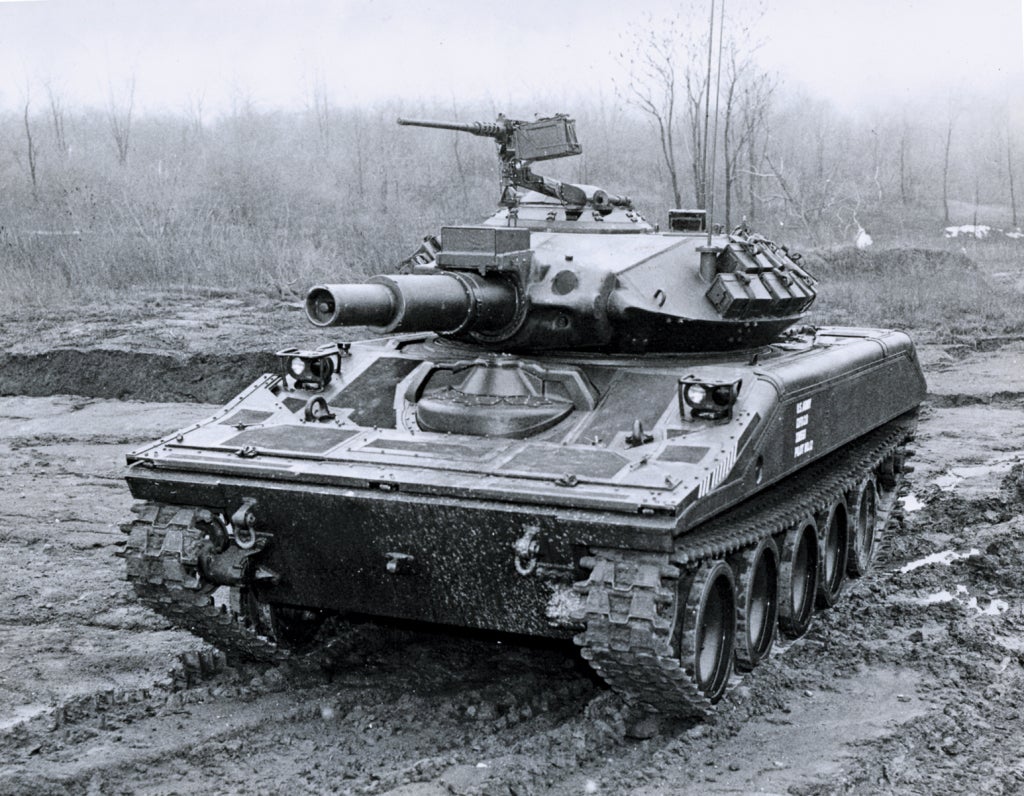 The MPF would perform a mission similar to that filled by the M551 Sheridan, an aluminum-hulled light tank fielded in the 1960s that was capable of being dropped by parachute to support airborne assaults, said Smith, an employee of Alion Science and Technology.

The history of the military tank has been dominated by the classic struggle between offense and defense. As more powerful guns were countered by thicker armor, there has been a steady increase in the weight of main battle tanks.

The push for bigger and heavier armored vehicles actually went the opposite way at the beginning, because the first tanks introduced by the British in World War I were lumbering behemoths, which in the Mark IV version weighed about 29 tons.

The French came out later with the FT-17, a more mobile tank that had a moving turret and weighed only about 7 tons. The U.S. Army used the French vehicle in World War I, and it made George S. Patton Jr. a tank advocate.

The trend from then on, however, was to bigger and heavier, illustrated most dramatically by the evolution of German tanks in World War II from the war-opening Panzer I at 5.4 tons, to the Panther at 45 tons, and the 1945 Tiger II that weighed 69 tons.

The primary U.S. tank in the war was the Sherman, a very mobile medium tank that started out at about 31 tons and went up to 38 tons with a heavier main gun. Its lighter weight meant thinner armor, though, which was no match for the powerful German tanks.

The Russians produced what many experts considered the best World War II-era tank, the T-34, which first saw action on the Eastern Front. It weighed about 29 tons but got quite a bit heavier by 1945.

Late in the war, the U.S. Army fielded the M26 Pershing, which was the first classified as “heavy” at 46 tons.

After the war, the Army developed the Patton, which evolved from the M47, which weighed about 50 tons, up to the M60 that weighed about 54 tons and was in service as recently as Operation Desert Storm in 1991.

In the Cold War era, the Soviet Union went through a series of main battle tanks to the T-72, which U.S. forces encountered in Iraqi armored divisions during Desert Storm. By then, however, U.S. Army armored divisions had the powerful M1 Abrams, which weighed about 60 tons and had a gas turbine engine and a 105 mm gun. The latest M1A2 Abrams with a 120 mm gun hit the scales at about 70 tons combat-loaded. 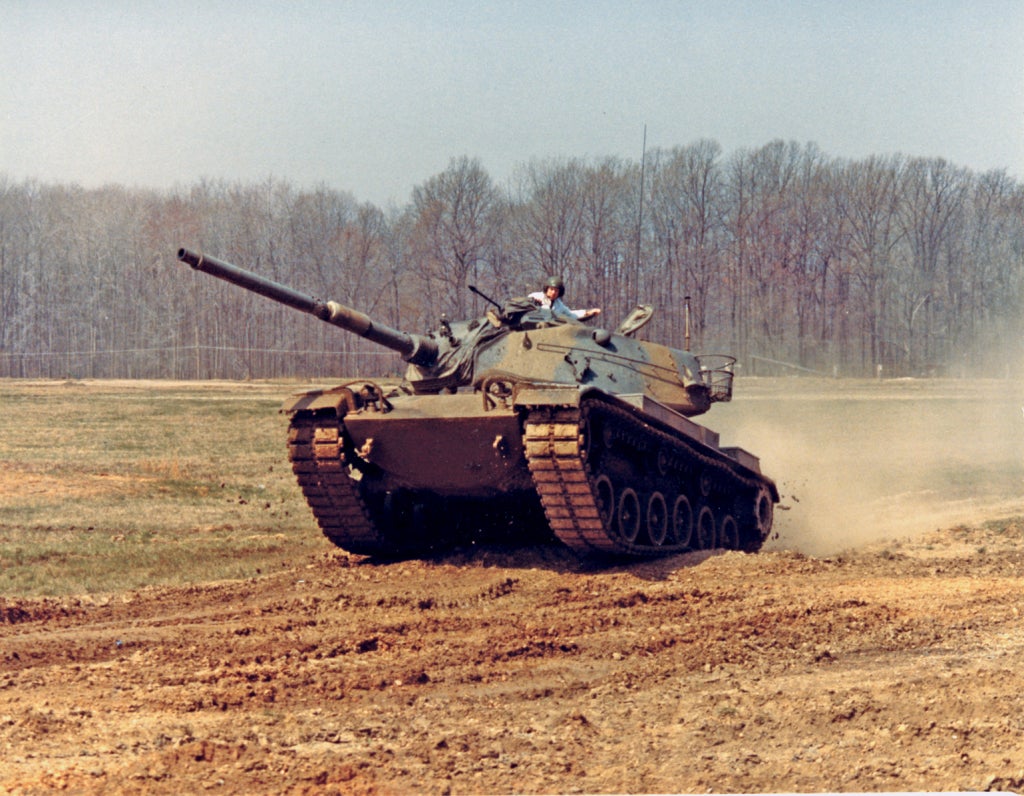 The Sheridan weighed about 15 tons, had a four-man crew and carried a unique 152 mm gun that could fire an anti-tank rocket called the Shillelagh and a variety of cannon rounds. Deployed in Vietnam for its mobility, the Sheridan’s thin armor was found to be vulnerable to mines and rocket-propelled grenades.

MPF “is an acknowledgement that they need this sort of capability” to go in with the airborne forcible entry soldiers when they are unable to air land heavy combat power, Smith said. It would provide some firepower on the ground to help the Infantry force “maintain tempo, to execute its maneuver and accomplish its objective in a relatively shorter period,” he said.

That requirement fits in well with the Army’s new operating concept—Win in a Complex World—that sees the need for the Army to project combat power rapidly at longer distances, Smith said.

“Organizationally, the force that is best equipped to do that is the Infantry combat teams out of the 82nd Airborne [Division] and the 173rd Airborne [Brigade],” he said. Although quickly deployed, “once they get on the ground, basically they are as mobile, with some minor enhancements, and tactically about as capable as the guys in World War II. They don’t have something that can come forward to take out bunkers or light armored vehicles and allow the Infantry maneuver to maintain its momentum.”

Although detailed requirements are still being developed, the goal is that MPF be capable of being delivered by parachute from C-17s or C-130s but have enough lethality to “defeat the expected target sets,” such as dismounted infantry, machine-gun positions and light armored vehicles, Smith said.

“The anticipation is that it would have some sort of a cannon, because you need the ability for rapid, multiple engagements,” which missiles such as TOW (tube-launched, optically tracked, wireless-guided) or Javelin cannot provide, he said.

The size of the gun and the crew would be limited because each factor dramatically affects the size and weight of the vehicle, Smith added. Those requirements would be shaped by the expected threats.

The idea is to be able to provide the protection needed to address the expected threats.

Smith said the Maneuver Center has developed an Initial Capabilities Document, which provides the initial validation of the program requirements and is being reviewed by Army Staff. The hope is the ICD will be approved soon, which would allow the center to get with the acquisition community to start the formal process of developing requirements, he said.

Otto Kreisher is an independent defense reporter who writes regularly for Seapower, Semper Fi, Leatherneck, Naval Forces and Air Force magazines plus a number of Web-based news outlets. In addition to covering state and national politics and legislation, he has focused on national defense, including covering U.S. combat operations in Grenada, Panama, Kuwait, Somalia and Haiti as well as aboard an aircraft carrier during Operation Iraqi Freedom.