Eisenhower and MacArthur: Toil, Trouble and Turbulence in the Philippines

“Hostility between us has been exaggerated. After all, there must be a strong tie for two men to work so closely for seven years.”

In Dwight D. Eisenhower’s own words, Army Chief of Staff Gen. Douglas MacArthur was “a forceful—some thought an overpowering—individual, blessed with a fast and facile mind, interested in both the military and political side of our government.” Eisenhower served closely with MacArthur for seven years. Those years were extremely important in Eisenhower’s career, for during that period he obtained experience in the ways of the highest levels of government.

What began as a cordial relationship between MacArthur and his senior assistant gradually degenerated during the Philippine years when Lt. Col. Eisenhower served as MacArthur’s chief of staff in Manila. What happened to drive these two future World War II leaders apart? The traditional rivalries between theater commanders in wartime are well-known; the deterioration of the relationship between MacArthur and Eisenhower is not. 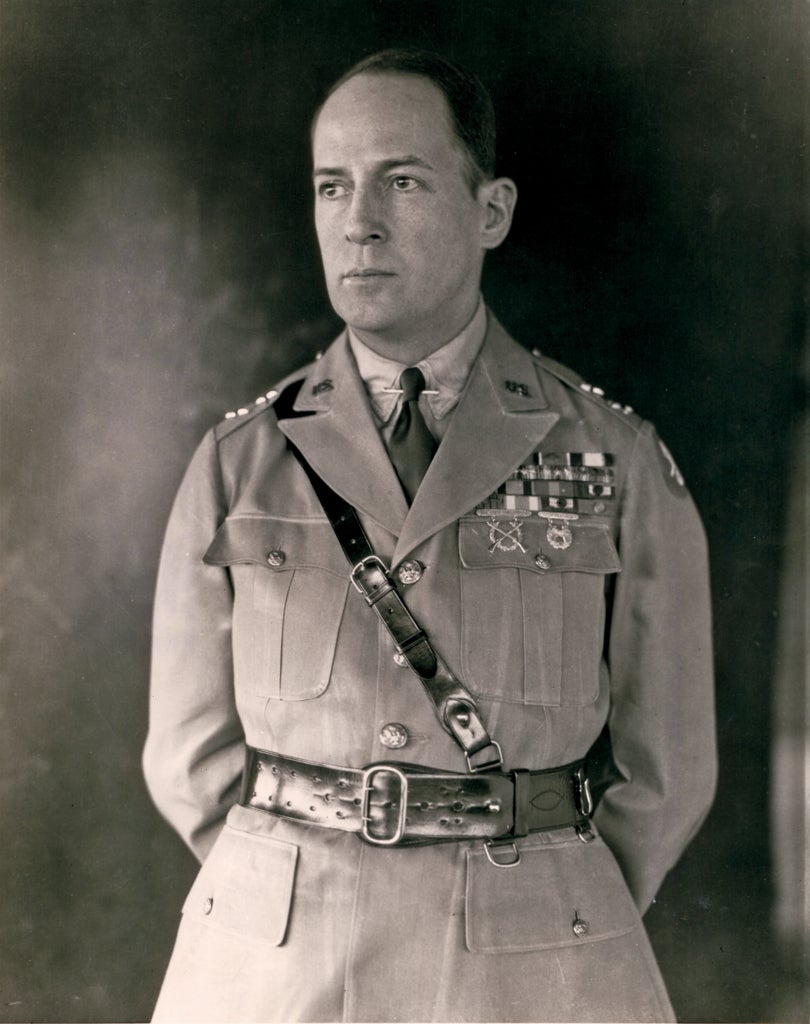 The Indispensable Staff Officer
The relationship between the two men began when MacArthur became Army Chief of Staff in 1930. At the time, Eisenhower served as assistant executive, Office of the Assistant Secretary of War. He held this position until Feb. 20, 1933, when he was reassigned as special assistant to MacArthur.

Though MacArthur knew that Eisenhower preferred troop duty, in January 1932, the latter wrote his father-in-law, John S. Doud, informing him that Mac-Arthur had wanted him to remain in his present job. Eisenhower later recalled that MacArthur “was very nice to me—and after all I know of no greater compliment the bosses can give you than I want you hanging around.”

Of MacArthur, Eisenhower wrote, “Fifty-two years old. Essentially a romantic figure. … Very appreciative of good work, positive in his convictions—a genius at giving concise and clear instructions. … Placed a letter of commendation on my record—and has assured me that as long as he stays in the Army I am one of the people earmarked for his ‘gang.’” Eisenhower took particular delight in the Army Chief’s endorsement of his own capabilities, but little could he have known that the next seven years with MacArthur would prove exasperating for both men. 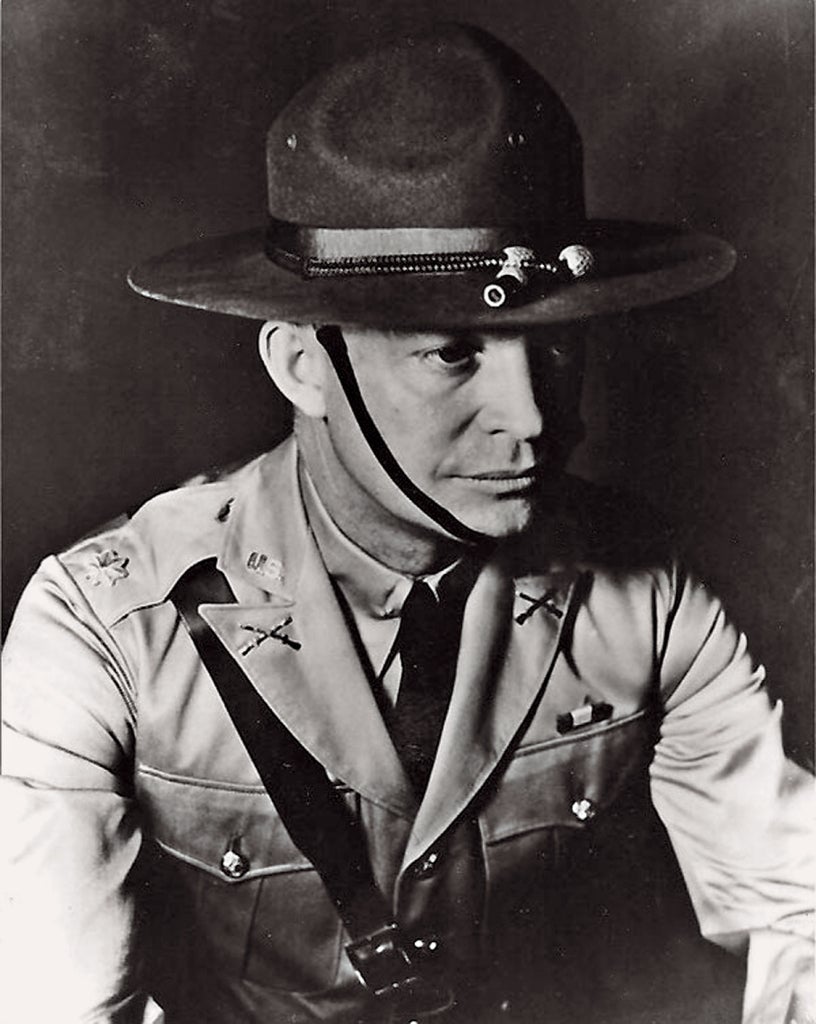 Working for MacArthur had its perks, including glowing efficiency reports by the Army Chief of Staff, but Eisenhower never relished his role as a member of the Washington, D.C., bureaucracy. Years later, he told his son, “I always resented the years I spent as a slave in the War Department,” yet when the opportunity to leave MacArthur presented itself, he demurred.

MacArthur’s tenure as Army Chief of Staff terminated in 1935, and he contemplated his next assignment. Just a year earlier, Congress had passed the Tydings-McDuffie Act, granting the Philippine commonwealth status as a prelude to complete independence, which would come in 1946. Elections had not yet been held in the archipelago, but the overwhelming favorite to win the presidency was Manuel Quezon. In late 1934, Quezon requested President Franklin D. Roosevelt to dispatch MacArthur to Manila to head the U.S. military mission.

To the Philippines
MacArthur’s first priority was to select his personal staff, and he wanted Eisenhower as his senior aide. According to Eisenhower, “General MacArthur lowered the boom on me, so to speak. … I was in no position to argue with the Chief of Staff.”

Contrary to his later claims that MacArthur had lowered the boom, Eisenhower was pleased by his transfer to the Philippines because he thought it would be a wonderful professional opportunity. His decision did not sit well with his wife Mamie, who confided to a friend, “Eich, Ike is ruined. He has gone off to the Philippines with that man MacArthur.”

The Military Mission landed in Manila on Oct. 26, 1935. Eisenhower’s principal responsibility was the development of the Philippine Defense Plan. The Philippine years proved so frustrating to Eisenhower that he dedicated a short 10 pages in his personal memoirs, At Ease: Stories I Tell to Friends, to his service with MacArthur in the Philippines. Once in Manila, he began questioning his decision to accompany MacArthur.

When Quezon conferred the title of field marshal on MacArthur on Aug. 24, 1936, Eisenhower thought the whole occasion “rather fantastic” and tried to persuade MacArthur to refuse the title. Years later, he discovered that the title was not Quezon’s idea; rather, it was that of the general himself.

Eisenhower voiced his frustration with his boss’ penchant for surrounding himself with yes-men. In his mind, such an attitude was hardly surprising, since he thought the general was “raised in the conception of Douglas MacArthur superiority.”

After several months, Eisenhower confessed, “I’ve remained on this job, not because of the Gen.—but in spite of him. … I’m at a crossroad. If the Marshal [MacArthur] is to persist in his arbitrary methods, and is going to make things as unpleasant, if not impossible, … then I’m for home.” Reflecting on the two years with MacArthur since the former Army Chief of Staff arrived in Manila, Eisenhower recalled, “We have been beset on all sides by difficulties arising from personal ambition, personal glorification, personal selfishness.”

An Unfortunate Incident
1938 proved to be the most stressful and most demanding year of Eisenhower’s service in the Philippines. It was then that an incident took place that weakened his relationship with MacArthur. In January 1938, the general thought that it would be good for Filipino morale if the people could see their army in Manila. The culmination of the large demonstration of strength would be a big parade. Unfortunately, MacArthur had not discussed the planned troop movement with Quezon. When an irritated Quezon questioned MacArthur, the general blamed his zealous lieutenants for proceeding with the plans despite the fact that he had in fact ordered Eisenhower to set up the parade.

MacArthur returned to his headquarters and was exceedingly unhappy with his entire staff. He claimed that he had never meant for the staff to proceed with preparations for the parade; he had only wanted them to investigate it quietly. Incensed that MacArthur was questioning his integrity, Eisenhower exploded. “General, all you’re saying is that I’m a liar, and I am not a liar, and so I’d like to go back to the United States right away.”

Putting his arm around Eisenhower’s shoulder, MacArthur backtracked and said, “It’s fun to see that Dutch temper take you over. It’s just a misunderstanding, and let’s let it go at that.”

For Eisenhower, however, the die was cast. If MacArthur possessed a low tolerance for perceived affront to his own integrity, so did his senior aide. Writing 30 years after their heated exchange, Eisenhower claimed, “This misunderstanding caused considerable resentment, and never again were we on the same warm and cordial terms.” Nor did either man attempt to soothe matters with the other.

When Eisenhower was visiting the United States to garner support for the Philippine army, MacArthur replaced him with Maj. Richard K. Sutherland. When Eisenhower landed at Manila on Nov. 5, 1938, he confided in his diary that he “found a vastly different situation, so far as it affects me and my work.” Recalling MacArthur’s resentment of Eisenhower’s popularity with the Filipinos in general and his intimacy with Malacañan Palace, the seat of the Philippine government, Eisenhower stated that while he was stateside, MacArthur removed him completely in official affairs from Malacañan. MacArthur also rearranged the office force so that Eisenhower was “no longer his [chief of staff]. But only another staff officer.”

Eisenhower continued, “Why the man should so patently exhibit a jealousy of a subordinate is beyond me. … Of course, he has accomplished one thing he wanted to do, that is, make certain that I’d get out as soon as I decently can.” Consequently, he applied to transfer to the States, and on May 27, 1939, the War Department assigned Eisenhower to the 15th Infantry Regiment at Fort Lewis, Wash. On Dec. 13, 1939, the Eisenhower family departed Manila. MacArthur, outwardly cordial, was happy to see him go.

Unbeknownst to Eisenhower, his return to the U.S. proved extremely beneficial. No longer associated with MacArthur’s falling star in the Philippines, he moved quickly to re-establish himself in the array of officers in Army Chief of Staff George C. Marshall’s orbit. Within two years, Eisenhower was summoned to Washington, D.C., in the aftermath of the debacle at Pearl Harbor. 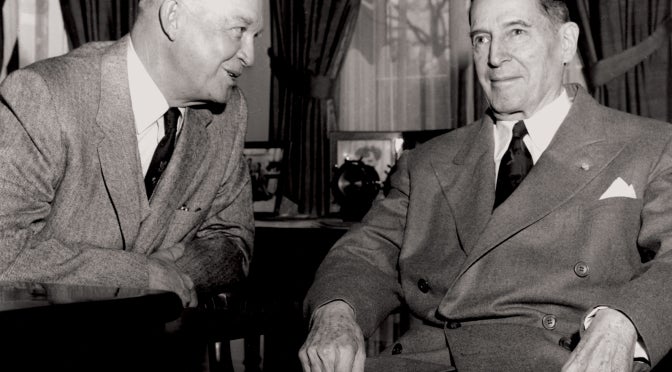 President Eisenhower and MacArthur met at the White House in 1954. (Credit: ImageCollect/Globe Photos)

In the final analysis, it is difficult to affix blame for the deterioration of the MacArthur-Eisenhower relationship during the 1930s. That the two spirited officers would eventually clash seemed inevitable. Undoubtedly, both MacArthur and Eisenhower profited from their relationship—MacArthur from the service of a brilliant staff officer and Eisenhower, as he later said, from “the administrative experience gained under General MacArthur,” which helped prepare him for “the great responsibilities of the war period.”

In later years, both men tended to smooth over their differences, and eventually they buried their hatchets. As Mac-

Arthur’s 80th birthday approached on Jan. 26, 1960, Eisenhower wrote a letter to his former boss in which he stated that the event “brings to all our people a renewed feeling of gratitude for your dedicated services to our common country.” Shortly thereafter, MacArthur traveled to Washington, D.C., for a brief, emotional reunion that was also their final parting.

MacArthur died on April 5, 1964; Eisenhower followed five years later on March 28, 1969. The two men formed an uneasy, albeit unequal, partnership during the years in which they served together. Better to remember the more cordial days in the War Department than to recall the Philippine years when their on-and-off animosity poisoned their relationship and neither officer seemed to make much effort to realize what the other was going through.