Different types of robots suit different missions. For instance, an airborne robot might skillfully maneuver around obstacles better than a ground robot, but a ground robot might have more energy to travel longer distances.

Army leaders believe the next stage of warfare will necessitate the support of mixed robot teams that can dynamically adapt to environmental challenges. But for different types of autonomous robots to work together, they need a core strategy that tells each team member how to move, plan and communicate. 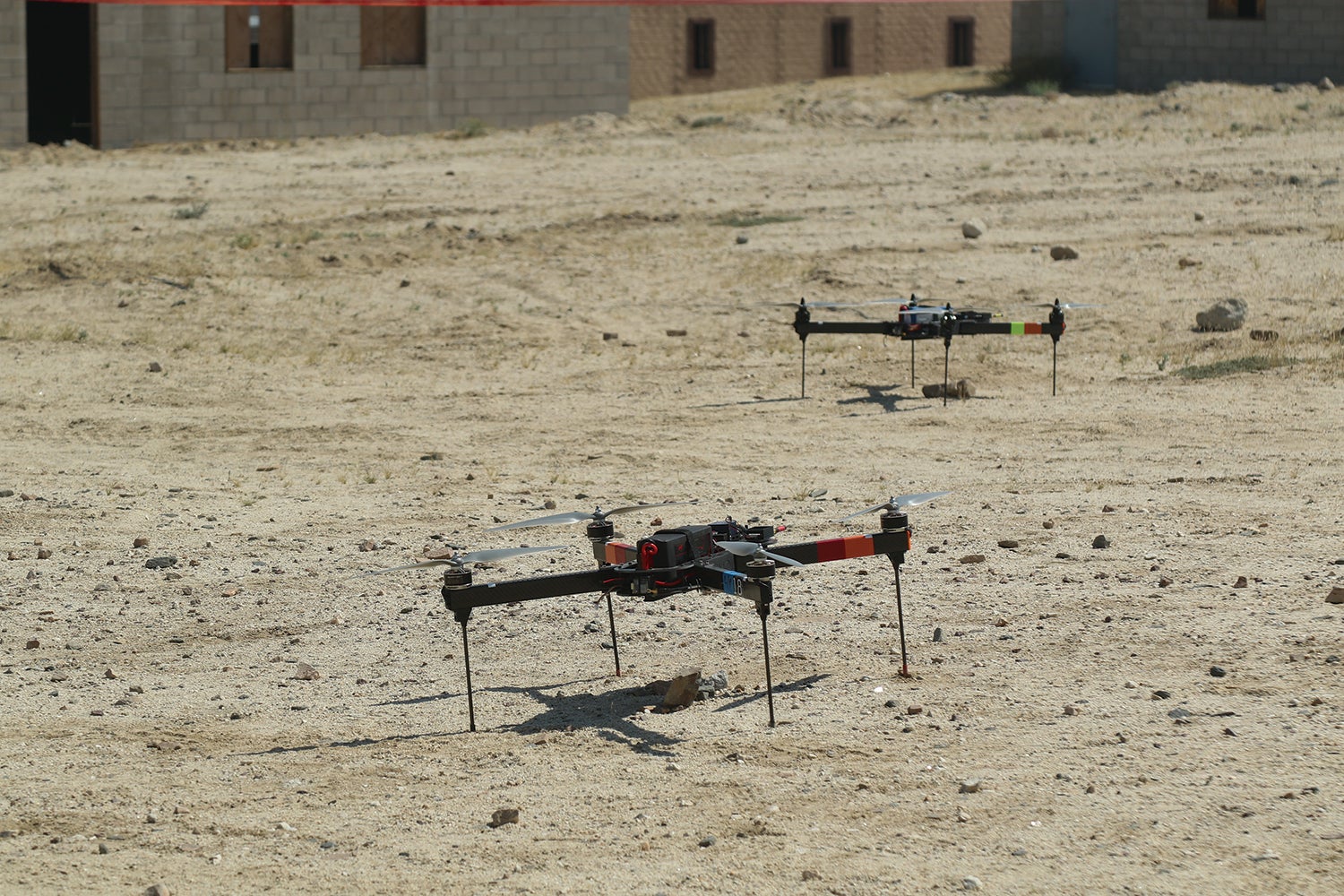 “A lot of Army-relevant road maps and autonomy strategy documents for multidomain operations rely on heterogeneous mixes of air and ground autonomous systems,” said Brett Piekarski, DCIST collaborative alliance manager. “We’ve done a lot of good work in the Robotics Collaborative Technology Alliance and the Micro Autonomous System[s and Technology] Collaborative Technology Alliance, but the place where we haven’t worked in is collaborative systems. That’s the thread that we see as the next long pole in the tent to enabling Army future concepts.” The collaborative technical alliances are partnerships among the Army, private industry and academia that focus on the rapid transition of innovative science and technology for application to Army needs.

Partnered with leaders in academia across the nation, the DCIST CRA endeavors to spearhead the science that extends the reach, situational awareness and operational effectiveness of human-robot teams against multidomain threats in complex and contested environments.

The DCIST program specializes in research on distributed intelligence, heterogeneous group control, and adaptive and resilient behaviors as well as in cross-disciplinary experiments that incorporate aspects of all three research areas. Given the sheer size and scope of the program, the combined progress being made under the collaborative research alliance could significantly accelerate the rate at which the Army achieves technological superiority on the future battlefield.

As evidence of this potential, a DCIST team within the Adaptive and Resilient Behaviors Division of the program presented a new framework for distributed intelligence at this year’s IEEE International Conference on Robotics and Automation (IEEE stands for the Institute of Electrical and Electronics Engineers). Supported in part by Boeing Co., this latest milestone in the DCIST program introduced a new approach to distributed information-gathering called Distributed Local Search, which optimizes the trade-off between information gain and energy cost for heterogeneous robot teams.

“Most of the current approaches have been to basically send out a team where robots myopically search like ants trying to find the closest food they can locate,” said George Pappas, professor of electrical and systems engineering at the University of Pennsylvania and team lead for DCIST. “One of the challenges for us is to determine how to make the robot swarm more strategic as a team and think more longer term and look for targets that are farther out. This is the first real push toward considering factors like energy costs, which introduces a new class of optimization problems to address.”

In order to accomplish important Army missions, autonomous robot teams need a strategy that maximizes the capabilities of each member of the swarm without wasting energy or time on unnecessary actions.

A centralized approach may offer a large degree of control over the robot swarm, but having one command station direct the behavior of the robots leaves the operation vulnerable to a single point of failure.

A distributed approach where each robot plans its own motions demonstrates greater resilience to such risks, but a complete lack of coordination will lead to redundant movements that drain the team’s resources.

In 2014, DoD funded researchers from top universities to create a new kind of information-gathering strategy that enables autonomous robots to make smart decisions in the long run instead of chasing after short-term benefits. In response to this challenge, Pappas and his team initially devised a new approach in the form of a coordinate descent algorithm, where the robots plan their actions one at a time.

“It’s called ‘coordinate’ because each robot is like a different coordinate, and we’re ‘descending’ because we’re minimizing the uncertainty by proceeding with one robot at a time,” said Nikolay Atanasov, assistant professor in electrical and computer engineering at the University of California, San Diego and a principal investigator for the DCIST program. “And the interesting part about this algorithm is that we can prove that this kind of decentralized planning will perform at least 50% as well as the optimal centralized performance even in the worst-case scenario.”

Distributed Local Search builds on top of the coordinate descent approach by factoring in the trade-off between energy and uncertainty reduction, a key element in real-life missions that most information-gathering algorithms tend to neglect.

“We want agents to be more exploratory so that they can acquire information and reduce uncertainty as a team, but we also want them to be economical about their resources, whether that is their battery or the amount of time they have,” Pappas said. “This new algorithmic challenge on how to balance both in a scalable way across many robots is one of the key innovations that we are pursuing with our colleagues as part of the DCIST program.”

With Distributed Local Search, individual robots communicate with their teammates on a regular basis and recommend smarter trajectories for the team as members obtain more information about their surroundings. During each brainstorm session, the robots evaluate proposed movements based on their knowledge about the environment and determine whether the energy costs of their future actions will outweigh the potential information gain. Once all the robots come to an agreement, the swarm swiftly adopts the updated team plan.

“The solutions generated by the swarm are much more physically realizable and much more meaningful,” Pappas said. “This research is not just about how to get robot teams to move from one place to another but also how to get them to learn things about the environment, about the adversary and about each other—that’s the new frontier.”

Muddy Side, Windy Side

To illustrate the power behind Distributed Local Search, the DCIST researchers performed a computer simulation that placed ground and aerial robots in an environment divided in half with a muddy side and a windy side. Ground robots had to expend more energy to move on the muddy side, while aerial robots had to use more energy to fly on the windy side. Once equipped with the Distributed Local Search algorithm, the ground robots learned to search for targets on the windy side while the aerial robots learned to stay on the muddy side.

“We can see that, over time, the Distributed Local Search algorithm finds solutions which assign the aerial robots and the ground robots to the areas that respectively optimize their movements,” Atanasov said. “In contrast, myopic algorithms would only try to maximize information gain and fail to take motion costs like the mud and wind conditions into account.”

Just as teamwork plays a crucial role in mission success for soldiers on the battlefield, the ability for robot swarms to jointly devise and modify a plan during the mission serves as a major technological advantage for the Army. This revolutionary artificial intelligence (AI) behavior framework could lead to development of large-scale robot teams that can quickly adapt to unexpected mission threats and intelligently formulate an appropriate counterresponse.

“The ability of intelligent autonomous systems to collaboratively plan in highly dynamic situations will open the doors for the Army to consider and employ robot teams in increasingly complex missions and operational environments,” Piekarski said.

For the Army, solutions such as Distributed Local Search represent only one of countless breakthroughs within this technical thrust of the DCIST program.

Jonathan Fink, the Army lead for the Adaptive and Resilient Behaviors Division, said some of the brightest minds in academia are working diligently with Army researchers to tackle the most challenging, Army-relevant problems in robust, multiagent autonomous behavior.

“There is work at the University of Pennsylvania where researchers are looking at how to use machine learning to accelerate the computation behind wireless communication between autonomous agents across networks,” Fink said.

“We’re also investing new techniques to enable communication in the presence of jamming technologies. We have the algorithmic tools that allow us to do the autonomous planning for these agents, but the end goal for a lot of this work is figuring out new ways to accelerate or improve the scaling of those algorithms so that they perform well even with a large number of agents.”

The DCIST CRA presents a range of technological milestones, but for Piekarski, the true value of the program stems from how its research targets the specific needs of the U.S. military in order to achieve dominance over its adversaries.

While robotics and AI technologies produced by commercial industry may satisfy the needs of the average consumer, soldiers on the battlefield face a uniquely challenging environment in which they won’t have guaranteed access to global communications, infrastructure or other resources.

“This focus on the complexity of Army-relevant missions, unique operational environments and adversarial settings drives the research to develop data sets and fundamental methods that extend commercial approaches beyond where they may fail under these Army constraints and conditions,” Piekarski said. “It helps identify technology gaps that would not normally be addressed by commercial market drivers and use cases.”

To many of the contributing researchers outside DoD, the DCIST program provides them with an opportunity to help soldiers in their own meaningful way.

“There are many, many collaborative efforts that are available to many of us researchers out there, but the DCIST program is unique in that it is one of the very few programs that can steer the research community toward problems that have a national impact on the security and safety of the nation,” Pappas said. “I’m very optimistic that, in a five-year horizon, we will be able to see large teams of land and air vehicles performing long-term missions over large areas.”