One of the highlights of this year’s Association of the United States Army Annual Meeting and Exposition was the opportunity to recognize and celebrate the selection of a great noncommissioned officer as our 2017 Sergeant Major of the Army William G. Bainbridge Medal recipient. 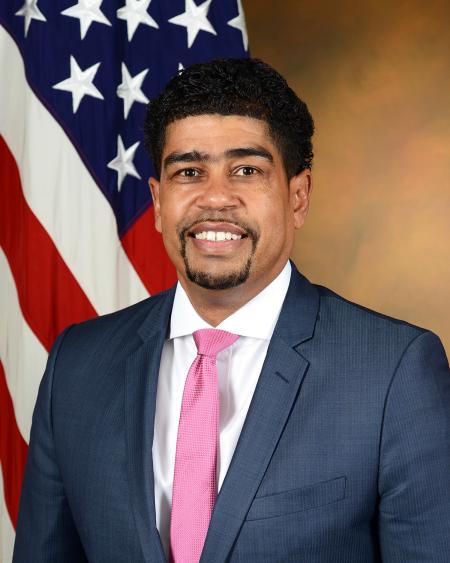 Additionally, he served two tours in the 3rd U.S. Infantry Regiment (The Old Guard) at Fort Myer, Va., and a tour with the United States Army Personnel Command.

Sgt. Maj. Hunter now works in the office of the assistant secretary of the Army for installations, energy and environment serving as a program manager for the Capital Ventures Directorate.

He also serves as the acting deputy executive director with the Department of Veterans Affairs Accountability and Whistleblower Protection.

After leaving the Army, Hunter sought opportunities to volunteer and continue his life of selfless service to the nation and the soldiers he served while in uniform.

Volunteering to serve with AUSA’s George Washington Chapter enabled Sgt. Maj. Hunter to maintain his all-important connection with the Army and his continuity of service to soldiers and their families.

Ultimately, he served as the chapter’s president in 2014, and he continues his service to this chapter and the association as a member of the chapter’s Advisory Board of Directors.

Hunter was instrumental in helping his chapter raise more than $150 thousand annually to support its dynamic scholarship program.

As part of his fund raising efforts, he had a leading role in establishing the chapter’s largest fundraiser – the annual golf tournament – to support financing not only the scholarship program, but also wounded warrior activities, soldier and unit awards, the Arlington Ladies and other essential community programs that support members of the Army and our civilian workforce.

In his role as fundraising chairman, Hunter helped raise almost $1 million to support service members, Department of Defense employees and their families in the National Capital Region.

Sergeant Major Hunter is a passionate volunteer who has given thousands of hours of his personal time and resources to support his chapter’s activities.

With his prior service in the Old Guard, he continues to be able to provide magnificent and meaningful tours of Arlington National Cemetery and historic Fort Myer to visiting soldiers, dignitaries and families visiting the National Capital Region.

On many occasions, he uses his leave time or weekends to provide service members and their families with tours of local national landmarks in the Washington metropolitan area including the Pentagon, Arlington National Cemetery, Bethesda Walter Reed Hospital, the U.S. Capitol and other historic landmarks.

Every Christmas holiday, Hunter is instrumental in organizing the chapter’s Project Hooah Christmas Party to benefit more than 200 wounded warriors and their families from the Regular Army, Army National Guard and Army Reserve recovering and living in the area.

His direct contributions to this annual event include organizing the buffet dinner, coordinating for Santa Claus and his helpers to support the event, and a visit by several Washington Redskin cheerleaders.

He also helps the chapter meet the financial challenge of providing Christmas gifts to the attendees with thousands of dollars of donated toys and gifts for the more than 200 children.

“Todd has worked zealously to make AUSA and the Army a better place for our soldiers and young professional families,” said William Glenn Yarborough, Jr., president of the George Washington Chapter.

He also volunteers as the chairman of the Governance and Nominating Committee for the American Freedom Foundation, Inc.

His support of this foundation allows for the continued support of America’s armed forces by providing funding for various veterans organizations with special emphasis on the education and welfare of those wounded in action, amputees, and families of members of the military killed in action in Iraq and Afghanistan.

While these examples of his many and meaningful contributions reflect the result of a great military and civilian career, they also represent his life-long dedicated service to our Army, our soldiers and Army civilians, and their families.

“Sergeant Major Hunter’s leadership of AUSA’s George Washington Chapter and his numerous contributions to our Army and our soldiers in the 12 years since his retirement, are a compelling testament to his leadership and love for soldiers and soldiering,” said retired Col. Gregory Gardner.

A “Soldier for Life,” Sgt. Maj. Todd B. Hunter’s dynamic and continuous support of the goals of the Association of the United States Army and the Noncommissioned Officers Corps are in keeping with the highest traditions of our Army and make him the truly deserving recipient of the 2017 Sergeant Major of the Army William G. Bainbridge Medal.

AUSA membership is the volume knob to ensure your voice is amplified many times over and heard throughout the halls of Congress, from sea to shining sea across this country, and throughout every small town and community in-between.