A quiet revolution is underway in Army medicine that could have a lasting impact on patients and providers. The protagonist behind the transformation is an insider, the 44th surgeon general of the Army who is changing how, when and where health care is delivered.

Lt. Gen. Nadja Y. West, the highest-ranking woman to graduate from the U.S. Military Academy, is all about breaking barriers, sensing it’s time to reshape the future of health care delivery by creating a culture of innovation and helping to shift a mindset that treatment can only be provided in a clinic.

West, who also is commander of the U.S. Army Medical Command, is creating a go-anywhere, do-anything mindset so the 142,000 people working in the Army’s health care system look beyond the walls of hospitals and clinics.

That means, for example, thinking about “how to complete the mission without the things you’re used to having, such as phones, computers, labs,” West said. It means encouraging medical soldiers and civilians to look beyond what’s going on in front of them in garrison and think of new ways to do what they do—anywhere. “It’s figuring out how to operate in any environment, and not necessarily knowing where that is.”

She has four priorities:

A constant on West’s list of priorities is keeping health care spending stable, a behind-the-scenes aspect of managing an expensive part of the Army that has held steady for the past few years. Containing those costs has been achieved, she said, through a combination of consolidating the size and location of treatment facilities, modernizing the delivery of services like outpatient surgical procedures, upgrading aging facilities and downsizing the command’s headquarters element.

Beyond the health of the Army’s wallet, however, is West’s goal to build a “premier, expeditionary, globally integrated medical force.” To achieve that, she is putting effort into more efficient health care delivery—on the battlefield and at home.

West, who took command in December 2015, understands that American soldiers go to war comforted by knowing that close behind their medic is a combat support hospital or a smaller, 20-member forward surgical team.

In just the past year, she said, the Army has gone a step further with the creation of an even smaller surgical team that backpacks into remote areas with the small units that work with the greatest operational risk. The team carries 500 pounds of lifesaving equipment to operate on and stabilize patients within that golden hour for survival.

It’s nothing new to special operators who have had this capability for decades, but soldiers in the conventional Army deployed to new and austere environments can expect to see more of this sort of surgical small-team presence as the Army Medical Department promotes a more vigorous expeditionary capability.

After five months of intensive training, the first ERS team, one of only three that have been created, deployed in May 2016 on a four-month rotation in support of U.S. Africa Command, where the nearest trauma care facility—such as in Germany—can be a nine-hour flight away.

Only three of these teams were stood up as a pilot program in Africa and they were so successful that the program advanced from a pilot into standing teams, West said. There is great demand for more, and no shortage of soldiers who want to get in on the mission, though this is easier said than done.

“There are people [overseas] who are way out there, but there’s also a shortage of surgeons and orthopedic surgeons servicewide so it will be hard to field a lot of these,” she said, explaining that taking a surgeon out of circulation can be tricky because of needs in garrison and because their skills could get rusty if they’re not busy during even a short deployment.

On the other hand, she said, sending surgeons that far forward gives line troops the assurance that their lives matter. Surgeons, she pointed out, “like to cut,” and she’s had to remind some that a slow day in the field means soldiers and their families are intact. When they’re not busy with soldiers, ERS members may also work with the local population if the operational environment allows it.

The teams get onto aircraft of opportunity with units that are moving around the continent, but they are light enough to travel in vehicles or even on foot as part of an operational team. The need is greatest in Africa because of the vast distances to trauma care.

“The beauty is they don’t make a lot of noise when they come in,” West said, describing the enormous movement required with a combat support hospital, which is critical in current operations, but with a large footprint that may not be viable on a future battlefield that is more dispersed. With 20 people, a forward surgical team is smaller, but also relies on a standing facility such as a Conex box or shipping container. 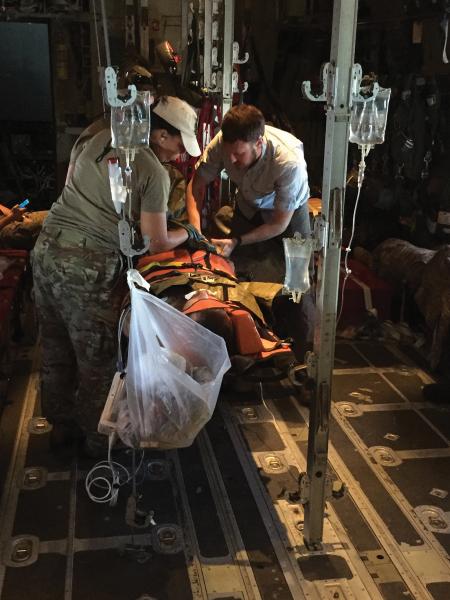 Because of the remoteness of operations in a place such as Africa, West said, “We have to have more highly trained individuals at the point of injury who can maintain and sustain the person after they’ve done resuscitative surgery. Once the bleeding stops, you have all the hemodynamic shifts that occur in the post-recovery period that someone needs to be able to take care of on the ground.”

Training for the first ERS teams took place at Camp Bullis in San Antonio, where the Army trains combat medics. With the expertise and guidance of special operations soldiers as part of the training cadre, members of the ERS teams learned how to use expeditionary equipment in small spaces with none of the amenities of a hospital environment.

There is growing enthusiasm for a mission that takes the most highly trained medical personnel deep into a combat environment, a deployment unusual for surgeons outside of special operations.

“These soldiers are locked and loaded, boots-on-the-ground soldiers,” she said. “A lot of them are excited. Feedback from the first teams is that this is what they joined the Army for.”

The signature wounds in modern warfare—traumatic brain injury and post-traumatic stress—continue to be Army Medicine’s top concerns when it comes to health of the force.

“The stigma of getting help,” West said, “has always been a concern,” but there also has been progress in beating that stigma with the introduction of behavioral health care at the unit level.

There are 62 12-member teams throughout the Army supporting 170 brigade-sized units. All 65 brigade combat teams are covered, West said.

Between 2007 and 2009, Army behavioral health care visits numbered about 800,000 a year. Today, West said, there are upward of 2 million visits a year. It’s not because more soldiers are troubled, she said. “It’s because people are using it more, and they love having those people down in the units.”

If a soldier needs help, she explained, “they don’t have to leave work and go to the hospital with possible stigma for having to leave.”

“The [behavioral health professionals] are part of the unit so it’s not odd because everyone’s talking to them, and the providers get to know everyone in the unit so if there are things going on they can stop things sooner,” West said.

Hospitalization for behavioral health in the Army is down by 41 percent, she said, pointing out that the improvement can be attributed to placing the specialty care where people live and work. Family members can drop in on a behavioral health professional at their primary care clinic, and children with a parent’s consent can talk to someone in the school nurse’s office instead of having to keep an appointment outside of school.

Virtual behavioral health care also has taken off, including among many of the older people West didn’t think would like talking with someone on a computer screen. There are virtual health centers at primary care clinics and anywhere with video teleconferencing capability.

At basic training centers, West said, journaling, yoga and mindfulness are incorporated into resilience training as resources and coping mechanisms. At soldier readiness centers, where soldiers just out of advanced individual training get comprehensive medical screenings, signs of behavioral health issues may be flagged by people who work there—not always to the delight of the units receiving them.

“If people see kids with potential problems, they talk with them and take them to behavioral health, and the comment was that sometimes medical is too nurturing and give guys a pass too quickly,” West said, explaining that it’s normal to experience coping issues when you’re a new soldier. When she was a student at West Point, she admitted, “there were a couple of times I wanted to go home.”

The Army is also considering reconfiguring some barracks to keep soldiers from being isolated in their rooms, a practice ushered in early in the 2000s when privacy was a top consideration in the effort to grow the force and offer civilian-style treatment. West pointed out that with privacy, the ability to keep an eye on people “has been lost.”

A physician assistant practices on a mannequin while using augmented reality glasses that link to a surgeon off-site.
(Credit: U.S. Army/Eve Meinhardt)

Hospital With No Patients

Telehealth, or virtual health care, has boomed in the Army over the past few years, but some challenges remain and West is working to address them.

The top challenge is securing patient privacy over the open net, which puts the Army behind the civilian sector in delivering virtual health care because it can’t use commercially available applications such as Skype or FaceTime.

“We’ve done facility to facility, but now we’re going to have telehealth to the home,” said West, noting that she got approval from DoD about a year ago and is working with the Army chief information officer to implement it securely.

Another challenge is getting the right virtual health care equipment in place and training enough of the right people to operate it. With some simple equipment at home, West said, a patient with congestive heart failure can have a blood pressure cuff and a medical-grade scale, plus access to a trained professional who can make recommendations over a secure line.

In a recent visit to Mercy Virtual Care Center in Chesterfield, Mo., West saw the possibilities in action—a four-story building with no patients, occupied only by health care professionals sitting before what looked like command panels, coordinating and monitoring the care of patients around the country. The center operates 24/7 year-round, and has the military’s largest electronic intensive care unit, according to the center’s website.

The Army recently opened the doors to its own virtual health care center at Brooke Army Medical Center on Joint Base San Antonio-Fort Sam Houston, which will act as a hub for virtual health care. It will operate much as Mercy does, West said, in that it will scour the Army medical network for a provider.

The telehealth piece is a concrete step for Army medical soldiers and civilians increasingly accustomed to providing care online, and that feeds into West’s quest to get everyone thinking of new ways to deliver care.

“We’re all one team with the same mindset, and it’s about how to live that every day so we don’t get shocked by [events] when they happen,” she said. It’s about “being prepared and looking to beyond what we do every day to see how the future of medicine is.”