Divergent Ethics: Facing a Foreign Partner Who Has a Different Moral Code

Divergent Ethics: Facing a Foreign Partner Who Has a Different Moral Code

American soldiers routinely deploy overseas to advise and assist other countries’ security forces that do not share the U.S. military’s high ethical standards. These divergent standards can create tension between the two partnered forces as well as within U.S. soldiers’ consciences.

Advise-and-assist missions require our soldiers to work alongside foreign counterparts who often exhibit levels of corruption, depravity and brutality that would never be tolerated within the U.S. Army. Some of the leaders and soldiers we support don’t share our ethical standards, doing things such as taking a portion of their subordinates’ pay or directing contracts to relatives. A few are sexually deviant, engaging in pederasty and other disturbing perversions. Some may violate the laws of armed conflict, particularly in their treatment of detainees. 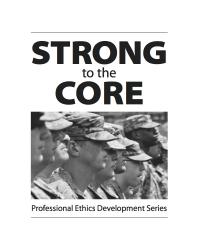 Predeployment training typically does not prepare soldiers to deal with these ethical challenges. Commanders may be hesitant to acknowledge to their soldiers the faults of those they are deploying to support. After all, their soldiers willingly make the sacrifices of military life—spending time away from loved ones and risking their lives—to defend what is morally good, so it can be embarrassing and demoralizing to discuss the moral shortcomings of our strategic partners.

When commanders do not provide clear guidance, however, their soldiers face the burden of making and taking responsibility for judgment calls on how to respond to unethical behavior by those they are supporting.

Enforcing U.S. ethical standards on foreign soldiers can be exceptionally difficult and complex. It requires moral courage, cultural competence and interpersonal tact. American advisers must determine whether and how a legal or moral rule applies in a different culture. They also must figure out how to “enforce” ethical standards in situations where they are not in charge. They can rarely require, and so must inspire and influence, modifications in their counterparts’ conduct.

Advisers tend to adopt one of three approaches:

The first approach should be repugnant to professionals whose function is the ethical application of land combat power. I know of a platoon during the Iraq War that stood by idly while a Shiite-led Iraqi Police unit it was advising summarily executed innocent Sunnis during the 2006 sectarian civil war. The platoon leader rationalized his inaction with an appeal to moral relativism: “The Iraqis have their own morality,” he said. “We don’t treat people that way, but I can’t tell them what they can or can’t do. It’s their country.”

A more frequent but barely less objectionable version of the relativist approach gives lip service to ethical standards but encourages violations of them. An adviser might say to his foreign counterpart, “You know that as an American soldier I can’t stand here and permit you to torture detainees. I would have to intervene or report you. So, I’m going back to my compound for the remainder of the day. Good luck with your interrogation.” This doublespeak, see-no-evil, hear-no-evil approach implicitly sanctions unethical conduct. It’s an affront to professional integrity and undermines respect for standards.

At the other end of the spectrum are advisers who expect their foreign counterparts to adhere strictly to the U.S. military’s ethical standards. Typically, these advisers become disappointed in and frustrated with their counterparts, who appear hopelessly corrupt and with whom they struggle to develop a trusting, effective relationship. Any ethical improvements they compel are temporary.

The most effective advisers recognize that moral principles are universal yet moral acts are contextual. For example, how should a U.S. adviser respond to a “ghost soldiers” situation in which she knows her counterpart is reporting falsely that his unit has more personnel than it does in order to receive inflated funding? She could dismiss it as “how they do things” and fail in her duty to develop the partner unit. She could notify authorities about the false report, destroying her relationship with her counterpart.

Or—consistent with the third approach—she could ask her counterpart why he is reporting inflated personnel numbers. She may discover that her counterpart is using the excess funds to compensate families of fallen and severely wounded soldiers, to augment the inadequate food rations of his enlisted soldiers, and to reward soldiers for excelling in the most dangerous missions. Less admirably, he keeps a small portion of the excess funds to augment his personal bank account, since his government likely will never be able to provide him a military pension or social security benefit in his old age.

So, what appeared to be blatant, unjustifiable corruption also is—when understood in context—the actions of a caring, inspiring leader. A perceptive adviser will recognize and commend her counterpart for that moral goodness, yet also discuss with him the downsides of his approach and collaboratively seek a better solution.

Some ethical judgments are obvious and non-negotiable. Advisers should clearly convey the “red lines” that should never be crossed and will never be tolerated, such as murder and rape. A military without moral constraints too easily becomes a murderous gang. But advisers also should realize that the hard work of advising occurs in the gray area where cultural differences make moral lines more difficult to determine. An empathetic adviser able to understand situations from her counterpart’s perspective is positioned to make sound assessments and to offer reasons that influence positive changes in ethical behavior.

Commanders and advisers should keep in mind that the U.S. military’s ethical norms have developed in a security environment in which we have never faced an existential threat. We have fought wars for national interests and in defense of the rights of people overseas (e.g., Europe, Korea, Kuwait), but never to forestall genocide against our own people. For many of the militaries we advise, winning is an absolute moral necessity, not a strategic luxury, and that fact should enter any ethical calculus.

A brigade commander I know led a full day of ethics training with each of his battalions prior to their deployment in 2012 on an advise-and-assist mission. He presented them with actual scenarios—one involved foreign troops beating civilians after a fatal IED strike; another involved foreign troops turning their weapons on their U.S. advisers during a dispute. In small groups, the soldiers discussed what they would do in those situations. After each session, the commander shared his perspective and guidance. By the end of their day, his troops appreciated the moral complexity of the environment they would operate in, knew the non-negotiable red lines, recognized that their mission included ethical mentoring and talked about ethical issues more confidently. Those soldiers were better prepared than most for the ethical challenges they faced as advisers.

Commanders on advise-and-assist deployments owe their soldiers clear guidance on how they expect them to approach the intercultural ethical challenges they will encounter. Advisers are most effective when they have a shared understanding of when to intervene, when to influence and when to ignore a counterpart’s behavior. Sometimes, good advising may entail U.S. advisers not reporting gray-area illegal acts perpetrated by their counterparts. Commanders must be willing to underwrite their subordinates’ good-faith judgments.