Design thinking arms the U.S. Army with the ability to creatively and rapidly produce solutions to some of the service’s thorniest problems. How will the Army improve its lethality with an increasingly obese and inactive younger population? How will the Army incorporate innovative capabilities amid a troubled procurement system and expanding near-peer threats? These nebulous and often ill-defined problems are well-suited for design thinking—an end-user-focused methodology to solving problems.

A recent project conducted by a team from the Center for Army Analysis for outgoing Army Chief of Staff Gen. Mark A. Milley demonstrates how design thinking can be applied to rapidly create a product using an unlikely tool. Milley wanted a way to visualize the force flow and understand the Army force movement for a major combat operation. Aside from his expressed interest, the team had minimal guidance about how to proceed.

The Hasso Plattner Institute of Design at Stanford University, California, describes the design thinking methodology in five modes, or states a designer can be in during the design methodology: empathize, define, ideate, prototype and test. Despite the high visibility of this Army project, design thinking offers principles that are transferrable to any problem.

The Center for Army Analysis team first had to understand what was meaningful to Milley. The goal was to be able to walk in his shoes and see the world through his eyes with reference to the force flow visualization. “Customer-facing” meetings with Milley and

During these meetings, the team listened for the questions that caused the senior leaders to struggle or to be excited. We looked for the moments when they held back or uninhibitedly offered suggestions. These predominantly nonverbal cues were important because we had to rely on what we saw and heard to decipher the features that would draw Milley to our visualization.

Proximity to the end user and direct experiences with the problem is arguably the most important step in designing a solution to the Army’s tough problems. Filtered information leads to a diluted and indistinguishable product that users will most likely reject. For people who are hungry for anything to increase their empathy of the problem and to improve their communication of the solution, being close to the source is gold.

The Center for Army Analysis team got a sense of the abundant challenges facing Milley. The potential directions the team could go with the visualization were endless. We needed to continually refine the problem to make the project more focused and manageable. It helped to recall that Milley wanted to see a “clean” and “clear” visualization. Anderson also described an animation product he saw during his deployment to Iraq.

The problem statement that the team landed on after multiple iterations was, “How do we create a clean and clear animated visualization of the force flow on a map?” This provided us an anchor that kept us from both aimlessly drifting toward other good ideas and confusing frenetic activity with progress.

There will never be a shortage of suggestions for the Army’s complex problems. However, iteratively arriving at a hyperfocused problem statement during the design thinking process cultivates momentum toward a solution rather than unproductive activity.

Once the problem was defined, the Center for Army Analysis team started to explore rational and obvious propositions as well as imaginative, “pie in the sky” suggestions. Even fantastical ideas can be idea fodder to merge or serve as the foundation for generating a corpus of ideas that could be the basis for prototyping.

The team started our brainstorming sessions by examining existing visualizations of the force flow. This gave us a perspective on what had already been presented to Milley.

Other visualizations, external to the military, were also helpful in pushing the needle beyond the ideas steeped in institutional knowledge and experience. The team explored the ways commercial businesses visualize their supply chain operations. We surveyed the different ways airlines envisage their flights. These fresh outsider perspectives provided sparks of insight and led us to question the conventional ways of presenting force flow information.

The Army’s complex problems will often require ideas from other industries, specialties and services. Fresh perspectives are priceless because novel ideas don’t self-generate in a vacuum. Design thinking encourages generating ideas as offshoots or derivatives of other great ideas. 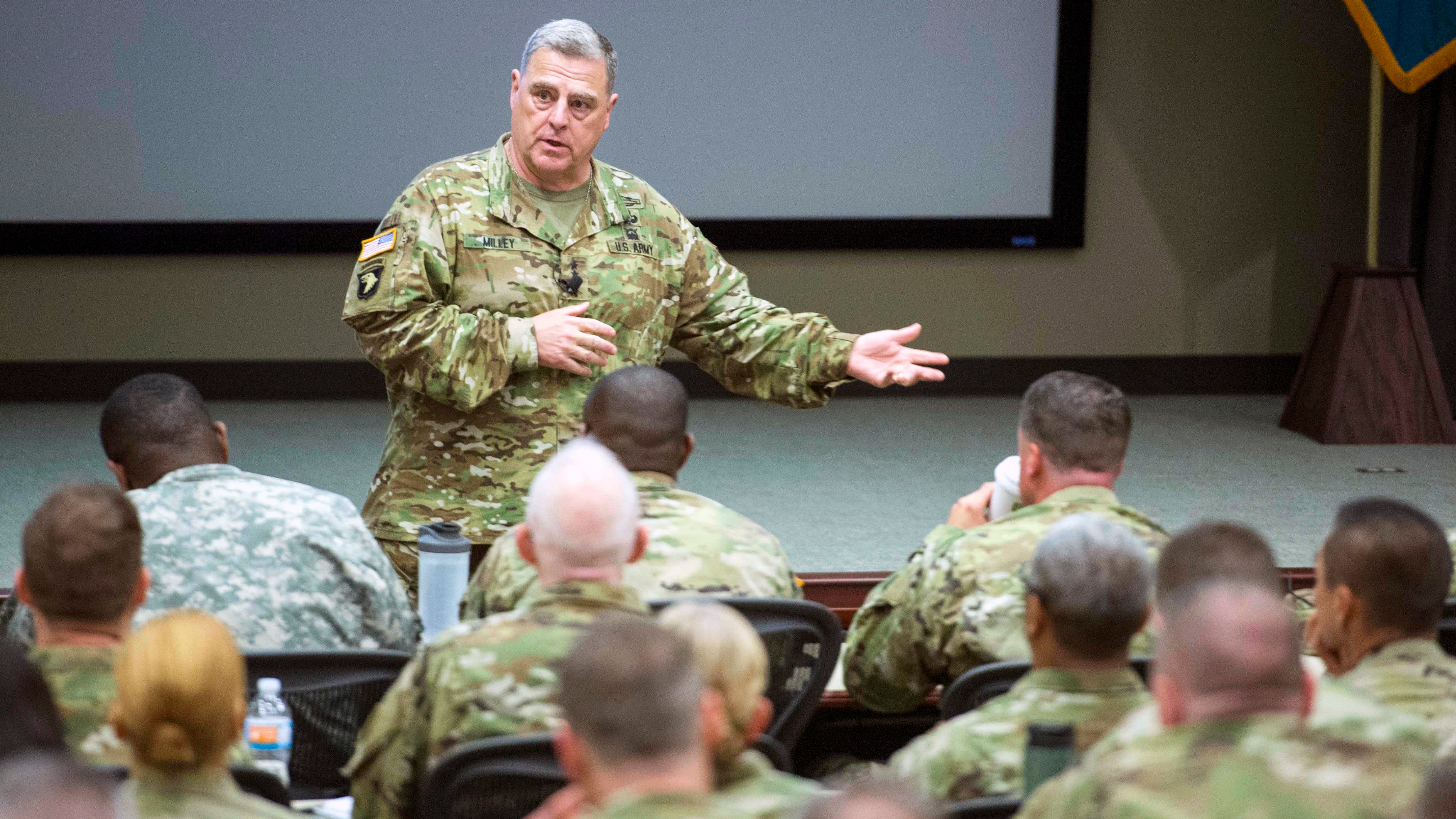 As the Center for Army Analysis team generated ideas to address the problem statement, we also considered how we could build a prototype to give life to those ideas. We would much rather present something tangible, rather than abstract concepts.

The collection of ideas called for more software, programming languages and time. However, such unfettered resources did not exist. These constraints forced us to look around for readily available tools that can quickly build out a prototype in a matter of days, not months. We landed on an unlikely candidate: PowerPoint. Army personnel will never find themselves in an animated conversation extolling the capabilities of PowerPoint.

However, after we accepted our fate, the advantages of PowerPoint became clear. It was fast and readily available on every computer. We were able to quickly generate an animated visualization using PowerPoint’s animation features and Visual Basic for Applications. Then, we were able to display it on Milley’s desktop without having to install packages, work around security issues or connect to certain servers. What seemed like a handicap turned out to be an advantage.

Senior leaders are exposed to hundreds of products a week, so eliminating the mental energy required to envision a concept and conduct their own forensic analysis was invaluable. Abstract ideas, obscure analytical solutions and concept plans will never elicit the same amount of enthusiasm as something they can hold and immediately understand.

A design thinking culture of failing early and often would unlock many ideas and prototype solutions to the Army’s vexing problems. This type of culture requires Army leadership to be open to frequently providing feedback on half-baked products so rapid refinement can occur.

Testing the prototype with Milley gave the Center for Army Analysis team the opportunity to gather more information about what matters most to him. We brought the visualization product out of the echo chamber of our own heads and pushed it into the ring for further scrutiny.

In turn, we received more clues and vital information that got us closer to what Milley was envisioning.

It was clear during our first briefing to Milley that the visualization in PowerPoint resonated with him. He invited us back two more times and gave us more directives about how to adjust it. He also wanted the visualization available on all his computers.

The Center for Army Analysis team could not have asked for a better outcome. We designed and produced a prototype that drew in the chief of staff of the Army. Our visualization gave him a better understanding of the operational plan and provided other stakeholders with a shared understanding of the major moving pieces.

Many Army personnel are already marching to this beat of design thinking. Still, there are many who are too strapped for time and resources to fully apply design thinking. In fact, most companies have teams of user-experience designers, product designers and industrial designers who are solely focused on ensuring their products resonate with their customers. The Army doesn’t have that luxury. Nonetheless, the vernacular and framework of design thinking arms us with ways we can better interweave our analytical efforts with design efforts to chip away at the Army’s most formidable problems.