The almost 40-year-old Abrams tank has a significant role in the Army’s vision for 2028 because of a major facelift that upgrades the engine, sensors and sights, along with advanced armor and an active protection system aimed at fighting, surviving and winning.

But it is not quite the radical new tank the Army needs for the future.

While tanks have been declared obsolete many times since their first use in the Battle of the Somme in 1916, the latest high-tech upgrades to the legendary M1 Abrams make it more reliable, effective and lethal, allowing the Abrams to be a key asset in the land portion of the evolving multidomain battle. It can’t fly. It can’t swim. It doesn’t fight cyberbattles or knock out satellites, but it is an essential piece of the multidomain fighting force.

The improved Abrams, the M1A2C, moves toward the Army’s expectations for the next-generation combat vehicle by having improved crew protection and mobility, but it lacks the option of autonomous operation, alternative fuel and directed energy weaponry capabilities being studied by the cross-functional team trying to set a road map to the future.

The next tank may not even be a tank-looking and tank-acting vehicle. 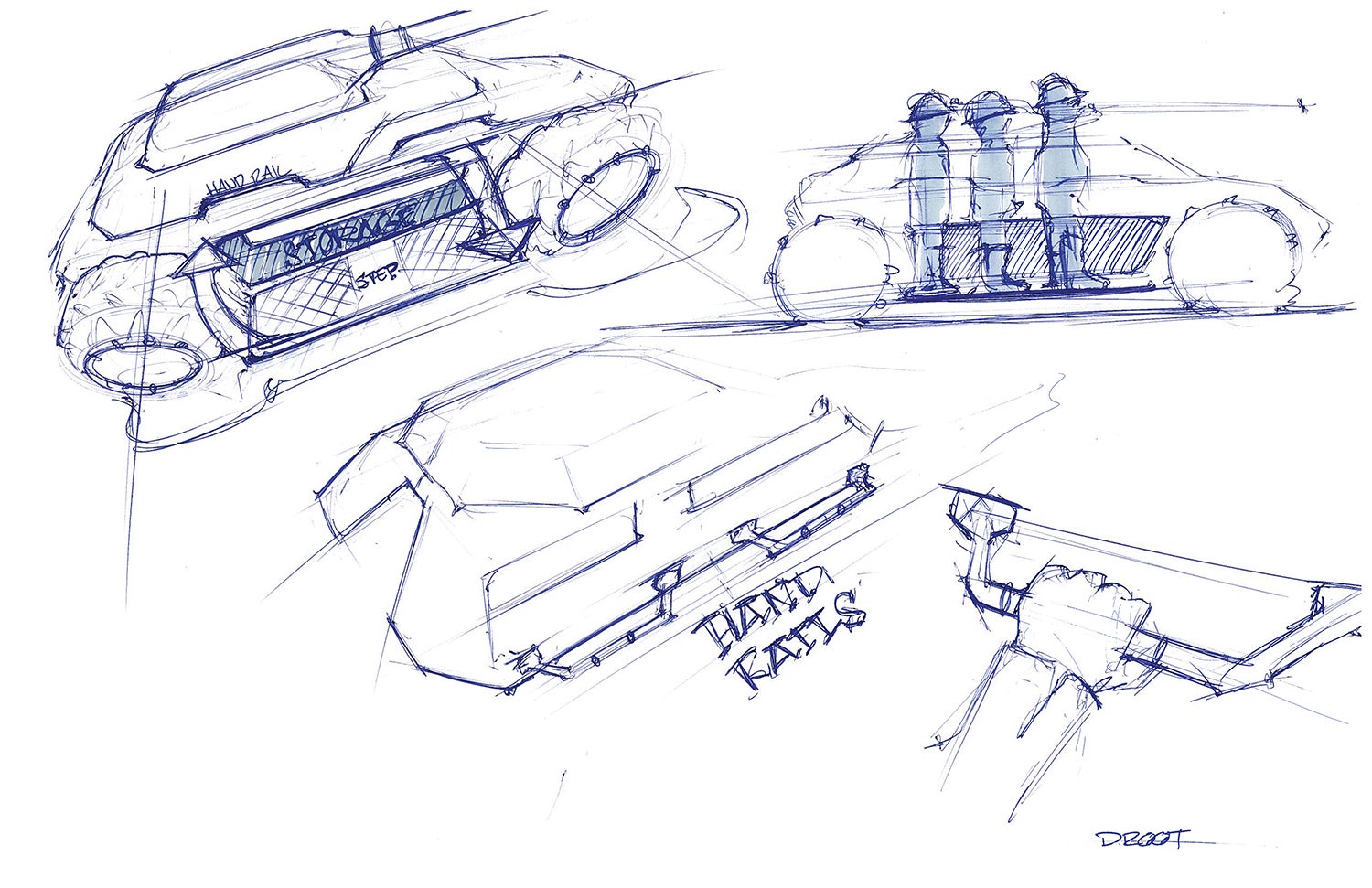 Current tank modernization efforts focus on “an immediate future” and reflect study and close cooperation between the Program Executive Office Ground Combat Systems, the Next Generation Combat Vehicle Cross-Functional Team and supporting research efforts being conducted under the umbrella of “Team Warren,” a name based on the Michigan location of the U.S. Army Tank Automotive Command.

Attendees at the Association of the U.S. Army’s Global Force Symposium and Exposition in March were told that any concept of a replacement system for the Abrams would be fed from two ongoing studies: one being conducted by the Army Science Board and the other by the U.S. Army Combat Capabilities Development Command (CCDC) Ground Vehicle Systems Center.

“In the future, a decision will be made for Abrams replacement,” said Brig. Gen. Ross Coffman, who heads the cross-functional team for the Next-Generation Combat Vehicle. “This is a decisive lethality that has to fight in really, really bad places. Is it a tank? I don’t know. But it will be decisively lethal, protect the crew against their main battle tanks, allow us to identify the enemy before they can identify us, and engage them at farther ranges.

“We are confident in the Abrams today. But at some point, the Abrams will have to be replaced. So, in 2023, we will have a decision point, with guidance from senior leaders on how to proceed.”

In addition to the two studies underway, he highlighted “a lot of exciting work in this space,” citing examples like “directed energy” and “other munitions that could be put in place.”

In a subsequent media roundtable at the AUSA event, Coffman smiled while repeating his previously quoted assertions that he “doesn’t care if [the Abrams replacement] hovers, is run by a flux capacitor or shoots lasers.”

He said the two studies “are answering questions on what is out there as far as current technology and what we think to be immediate future technology to provide us options. That’s really the focus. No one, at least in my office, disagrees that we need something that has the capability to deliver decisive lethality with a survivability level that outpaces our peers. But I’ve been very purposeful in saying it may not be a tank, because I don’t want to limit what is available to our soldiers.”

But what about a tank beyond the immediate future? Where is the focus beyond 2028?

When asked to talk about a more far-reaching future, representatives for the Maneuver Center of Excellence at Fort Benning, Georgia, admitted to “a strong reluctance to get wild,” adding, “No one wants to talk sci-fi or get too futuristic.”

Likewise, industry planners tended to keep their focus on more of a 10-year technology window, with several company representatives declining to speculate even that far.

For example, as a possible reflection of Coffman’s comments about “other munitions that could be put in place,” Craig Aakhus, director of large-caliber ammunition for Northrop Grumman Innovation Systems, was quick to highlight the 120 mm Advanced Multi-Purpose, XM1147 High Explosive Multi-Purpose—Traced round “and the capabilities that round will bring to Abrams.”

AMP will replace four currently inventoried tactical rounds—M830, M830A1, M908 and M1028—with a round that not only retains performance against the existing target set but adds new capabilities for antipersonnel airburst.

“We’re finishing up on design work right now and then going right into qualification,” Aakhus said. “That looks like it will be completed over the next several months, and we are looking to go into low-rate production in the next year.”

Another “future” tank projectile, which he dubbed “the next-generation kinetic energy round,” is the M829A4. Again, that’s in its second production year and hardly a “far future” concept.

When pushed further toward the future, Aakhus pointed to significant potential in technologies like the advancement of forward-looking infrared and acknowledged multiple “extended line of sight activities underway” to extend the range of the AMP type of capability and also include “hard-target armored defeat out at range.”

John Baylouny, executive vice president and chief operating officer for Leonardo DRS, was able to offer a look a few years further out, pointing to some of his company’s efforts in so-called quantum technologies.

Noting that “quantum can be broken up into a lot of different areas,” Baylouny said, “A lot of people are putting time and energy into quantum computing, because of the promise of breaking codes and things like that. We don’t. We’re putting our energy into quantum sensing and working to apply quantum sensing theory to the tough defensive security problems that we have today.”

He cited a number of university partners in the company’s efforts to apply the technology, focusing the combined expertise on a subset of quantum sensing known as weak measurement amplification.

“The idea is to detect a weak signal in a high background,” he said. “And that’s kind of a generic statement across all of detection theory, including radars, LIDAR and communication systems. They all try to find a signal in a heavy background. And weak measurement amplification allows you to get more signal-to-noise ratio than you thought was possible by using quantum techniques.”

The company has focused both internally funded and government-funded efforts on the problem, citing progress in validating, extending and then applying the theory, he said.

“We believe that this work will eventually inflect and disrupt a number of areas of signal detection: LIDAR, radar, communications and navigation systems. All these systems will be influenced by quantum-sensing techniques, probably in the next 10 years,” he said.

The industry view of “future technologies” seems to fall in the same 10-year window as the Army’s 2028 Multi-Domain Operations vision.

At the risk of entering the “too futuristic” minefield, the Army solicits more futuristic ideas directly from soldiers through its Soldier Innovation Workshops, conducted at the CCDC Ground Vehicle Systems Center.

“The Soldier Innovation Workshops are events that we hold here two or three times a year,” said Dave Centeno, who leads the workshops. “They are our attempt to get ideas directly from soldiers, the users in the field, on what are some of the capabilities that they would like to see in the future, and by future we are talking five years to 20 years out.

“These ideas range from subsystem components to full system-level thoughts or ideas,” he continued. “What can the Army provide them to make their job easier and to make their mission execution more effective?”

Program planners coordinate with units across the active Army, as well as National Guard and Army Reserve units, to get participants to provide their perspective on a limited problem or a certain gap or objective. The soldiers are teamed with industrial designers and artists to obtain a graphical depiction of the ideas that emerge. Past workshops have produced ideas ranging from specialized wheels that fold away under a vehicle, to see-through armor systems that allow a fighting vehicle crew to see exactly what’s happening outside of their vehicle, Centeno said.

“Once we get those products out of that interaction, it gives us a better idea of what the soldiers were thinking, and it gives us a product you can now work with and start shaping and moving in a virtual environment,” he said.

Some of the products then move beyond paper into 3D models.

“The commander for Army Futures Command, Gen. [John M.] Murray, has alluded to the fact that he would like to see systems being fielded in the future based on some level of feedback from the users. And I think in that sense, the Soldier Innovation Workshops could help inform and shape some of the features on future systems or platforms,” Centeno said.

Significantly, Centeno said plans are underway to direct one of the workshops toward elements of a “future tank.”

If the Soldier Innovation Workshops double the future vision to 20 years, the most obvious step after that would be the Defense Advanced Research Projects Agency. Proof that DARPA is not afraid to go “too futuristic” can be found in the agency’s June 2018 Tactical Technology Office Broad Agency Announcement: Disruptive Capabilities for Future Warfare.

Under “Ground Systems,” the Tactical Technology Office announcement seeks to “break the symmetry of ground combat through the application of numerous autonomous agents, as bulwarks for our service men and women exposed to high-casualty risks across the spectrum of conflict. Threats in this domain are often met with marginal technical evolution, meant to re-establish equilibrium. TTO is interested in generating a more permanent asymmetry to better safeguard personnel while increasing lethality, reach and situational awareness in combat operations.”

There it is. DARPA said it. Starship Troopers. Published in 1959, the book introduced a far-futuristic “mobile infantry” deploying from space transport ships in “dropships,” more akin to armored personnel carriers (APCs) than tanks.

When it was published, the book’s dropships were being crafted on paper as the Army was rapidly transitioning three generations of APCs from the M75 to the M59 to the original gasoline-powered M113. However, the timing of the APCs and the book’s publication may have been merely coincidental. The fact is that the author, Robert Heinlein, was a 1929 graduate of the U.S. Naval Academy who served as a naval officer in the early 1930s. In their Starship Troopers applications, the futuristic dropships look quite a bit like the early models of Landing Vehicles, Tracked, that the Marine Corps began to explore in the late 1930s.

Science fiction origins aside, futuristic ideas can come from many sources. Perhaps some of those ideas are with a soldier about to undertake an innovation workshop. Or perhaps they are on the mind of a cadet at the U.S. Military Academy. Putting aside the risk of “too wild” or “too futuristic,” the fact remains: “Every one of you is part of our evolution and the construction of the future force,” according to outgoing Army Chief of Staff Gen. Mark A. Milley in the foreword to the U.S. Army Training and Doctrine Command Pamphlet 525-3-1: The U.S. Army in Multi-Domain Operations 2028.