Hunched over a long table strewn with plates of chicken Kiev, tucked away in an underground restaurant beneath Kiev, Ukraine’s Maidan Square, Olena Bilenka, a partisan Ukrainian nationalist with tattoos and a strong physique, looked at us intently. When one of our cadets, a dual Russian-American, offered to interpret, Bilenka barked, “Nyet!” Refusing to speak the language of the occupier, she would only speak through a Ukrainian interpreter.

Bilenka is one of thousands of proud Ukrainians who quit their day jobs to take up arms fighting separatists in the Donbas, the conflict zone in Ukraine’s east. These volunteers helped stem the advance of the Russian-backed separatists in the spring and summer of 2014. The volunteers’ role in the conflict is more than a localized anomaly. Learning from Ukraine’s experience, other nations are taking proactive measures to improve their own defenses by arming civilian militias and volunteer reserve forces and instituting training not unlike The Hunger Games to teach civilians how to fight like guerrillas.

In a 2016 wargaming exercise report, the RAND Corp. found that Russian forces could seize any of the three Baltic capitals within 36–60 hours—faster than NATO could deploy troops to support. Considering that sobering assessment, and with Russia’s defense budget greater than the gross domestic product of any of the Baltic States, how can any of these nations hope to deter Russia?

The Baltic States know that trying to combat the Russians symmetrically is a fool’s errand. Moreover, since NATO has never been truly tested, they are unsure the alliance would come to their “defense.” And given the RAND study, they also understand that any NATO assistance is more likely to take the form of an invasion to liberate as opposed to a defense.

A mortar platoon from the Estonian Defence League participated in a 2013 NATO exercise that included the Baltic States and Poland.
(Credit: Wikimedia Commons)

As a result, the Baltic States have incorporated volunteers into their defense planning. They, as well as other nations, view these forces as a cost-effective deterrent that contributes to a “porcupine” or “poison pill” strategy. While they realize they have little chance of defeating an invasion by conventional Russian forces, this strategy is meant to convince a would-be invader that it would be too costly in the long term for the invader to maintain their gains. By this logic, it deters them from invading in the first place.

While most of Prussian military strategist Carl von Clausewitz’s work is dedicated to the study of direct warfare, aimed at defeating the enemy and capturing territory, he also discussed indirect warfare, which is aimed at exhausting the enemy. The goal of the volunteers, in the context of Baltic defense, is to exhaust the enemy. This strategy proved effective for the Viet Cong against the U.S. in Vietnam and for the mujahideen in Afghanistan against the Soviet Union in the 1980s.

Just as the U.S. has historical experience with irregular soldiers and militiamen during our Revolutionary War, the Baltic States have their own. During and after World War II, the so-called Forest Brothers were a band of Baltic partisans who waged a guerrilla war against their Soviet occupiers. Despite numbering some 28,000 at their peak, they lacked the capability and resolve to mount significant resistance against their Russian occupiers, dissolving only years into a decades-long Cold War. Embarrassed by this history, the Baltic States have vowed to never let this happen again.

Each of the Baltic States has taken a slightly different approach to building its resistance force, but the goal is the same: signal to Russia that its standing army, much like the tip of an iceberg, is only the visible part of a much larger resistance force. The population will take an active part in defense, conducting harassing and spoiler attacks during any invasion before transitioning into an insurgent force once the standing military has been defeated or dissolved back into the population.

The Estonian Defence League sponsors 24-hour competitions nearly every weekend that test skills, such as constructing IEDs, that would be useful for insurgents to employ against an occupying army. Latvia is overhauling the curricula in its schools and introducing civic education programs to foster greater patriotism among younger generations.

Lithuania has its National Defense Volunteer Forces and the Lithuanian Riflemen’s Union. It has also published and widely distributed three manuals for its citizenry. The first, “How to Act in Extreme Situations or Instances of War,” provides instructions on how to conduct civil disobedience against an occupying enemy. Its most recent manual, “Prepare to Survive Emergencies and War,” provides detailed images of Russian equipment (for intelligence purposes) and instructions for administering first aid and surviving in the wild. 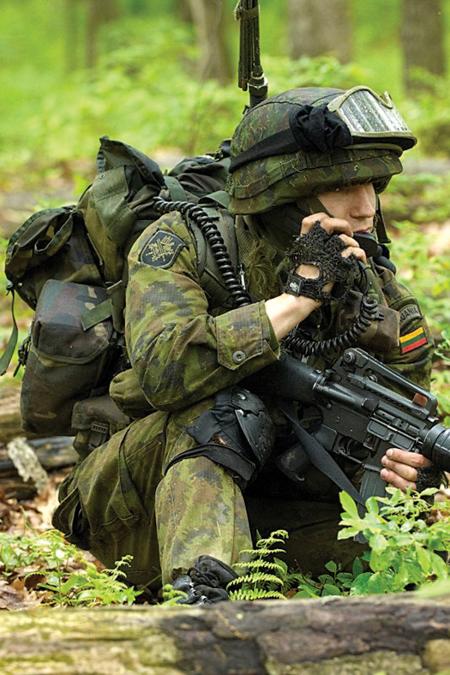 A member of the Lithuanian National Defense Volunteer Forces training in Pennsylvania in 2008.
(Credit: Wikimedia Commons)

Given that allies and potential adversaries are increasingly turning to building within their populations the capability to act as a large guerrilla force, it is useful to consider how this might impact the U.S. Army.

In an era of “hybrid warfare,” the U.S. Army should expect to see civilian militias increasingly volunteering to act as self-defense forces in the event of another Crimea-style invasion. The Army can and should involve itself in the training and discipline of these forces at the tactical level.

Back at the restaurant, Bilenka described fighting in the Donbas while she was eight months pregnant, wearing a Canadian uniform and a balaclava. Many of the volunteers were given nicknames. Hers was Marusya Zvirobi: The first name is that of a famed Ukrainian partisan who fought in the Russian Civil War. The surname is a type of grass that she told us also means “as severe as the beast.”

Fighting while pregnant, with whatever weapons or materiel are available, and the adoption of locally evocative nicknames—these are all signals of volunteers’ deep commitment to a cause and an equally deep commitment to fight. Properly understood, they represent a powerful force on the battlefield.

Col. Liam Collins, U.S. Army retired, is the former director of the Modern War Institute at West Point. As a career Special Forces officer, he conducted multiple combat deployments to Afghanistan and Iraq as well as operational deployments to Bosnia, Africa and South America. He holds a doctorate in public affairs from Princeton University, New Jersey.

Lionel Beehner is an assistant professor at West Point and director of research at the Modern War Institute. He holds a doctorate from Yale University, Conn.