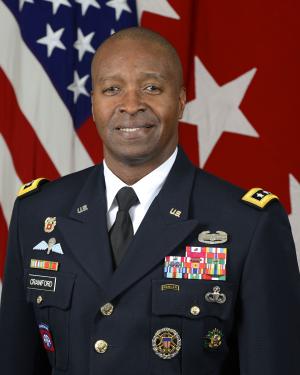 As the CIO, LTG Crawford is the principal advisor to the Secretary of the Army, setting strategic direction and objectives for the Army network, and supervising all Army C4 (command, control, communications, and computers) and Information Technology (IT) functions. As the G-6, he advises the Chief of Staff of the Army on the network, communications, signal operations, cybersecurity, force structure, and equipping.

During his 33 years of service, LTG Crawford has served in a variety of leadership positions at the tactical, operational, and strategic levels. In his previous assignment, he served as a Special Assistant to the Director of the Army Staff, Pentagon, Washington, D.C. Prior to that, he served as the 14th Commander, U.S. Army Communications-Electronics Command and Aberdeen Proving Ground Senior Mission Commander, Aberdeen, Maryland. Prior to that, he served in the posts of J6, Director of C4/Cyber and Chief Information Officer, U.S. European Command; Commanding General, 5th Signal Command (Theater); and G-6, U.S. Army Europe in Wiesbaden, Germany. His command assignments include the 516th Signal Brigade, Fort Shafter, Hawaii; 82nd Signal Battalion, 82nd Airborne Division, Fort Bragg, North Carolina, and Operation IRAQI FREEDOM, Iraq; and B Company, 51st Signal Battalion, 35th Signal Brigade, XVIII Airborne Corps, Fort Bragg, North Carolina.

LTG Crawford and his wife, Dianne, have two sons, Bruce, Jr. and Corey.

Jeff Sorenson is a partner with A.T. Kearney where he leads the Public Sector Practice for the Americas. Jeff has extensive experience in defense acquisition and serves clients at the federal, state, and local levels. He has helped organizations develop, procure, and deliver more than 30 military systems with complex technologies—from battlefield intelligence automation, tactical intelligence equipment, and night vision products and tactical missile systems for aviation, vehicle, and individual platforms to large-scale enterprise network and tactical communication systems. Jeff is based in A.T. Kearney’s Washington, D.C. office.

Notable client engagements include:
• Industrial base analysis of 16 major weapon systems to improve efficiency and effectiveness despite budget decreases for three Department of Defense clients
• Supply chain assessment that identified $80 million in annual savings for a large retail company

Jeff was a 2010 Federal 100 award winner for Federal Computer Week and was inducted into the 2014 GovCon Exec Wash100 for consulting expertise. He is a registered certified public accountant in Illinois, a member of the National Security Agency Advisory Board on Information Assurance, and a member of the Cyber Committee for the Armed Forces Communication and Electronics Association.

Before joining A.T. Kearney, Jeff was the Army’s chief information officer. He also worked in the Office of the Assistant Secretary of the Army for Acquisition, Logistics and Technology, where he was the deputy for systems management and the program executive officer for tactical missiles. He also directed the Army’s night vision program and was named Army Program Manager of the Year. Jeff earned a bachelor’s degree in engineering from the U.S. Military Academy and an MBA from the Kellogg School of Management at Northwestern University in Illinois. 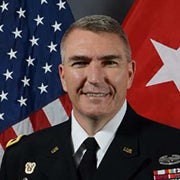 Director of Architecture, Operations, Networks and Space, Office of the Chief Information Officer/G-6

Major General Pete Gallagher serves as the Director of Architecture, Operations, Networks, and Space in the Army Chief Information Officer/G-6; responsible for strategy, policy and guidance to enable mission command across the Army’s Global Enterprise Network.

MG Gallagher commissioned as a Distinguished Military Graduate from Pittsburg State University. He holds a Bachelor’s degree in Mathematics and Physical Education and holds a Master’s degree in National Security Strategy from the National War College.

MG Gallagher spent the majority of his career providing communications support to Conventional and Special Operations Forces throughout the world. MG Gallagher has deployed numerous times in support of Operation ENDURING FREEDOM, and Operation IRAQI FREEDOM. His recent Staff Assignments have been Deputy Director of the Pakistan-Afghanistan Coordination Cell, International Security and Assistance Force-Afghanistan CJ-6, Executive Officer to the CIO/G-6, and Director, J-6 in United States Central Command (US CENTCOM).

MG Gallagher and his wife have been married for 30 years. They have two sons, both are Soldiers in the 82nd Airborne Division.

Major General David G. Bassett was appointed Program Executive Officer for Ground Combat Systems in September 2013. He is responsible for the life-cycle management of a complex and diverse organization with six Acquisition Category I programs (Armored Multi-Purpose Vehicle program, M109A7 Self-Propelled Howitzer program, Abrams Tank upgrades, Bradley Fighting Vehicles upgrades, the Stryker Family of Vehicles and the M88 HERCULES). In addition to the combat vehicle modernization efforts for each of the ACAT I programs, to include active protection systems, he is also responsible for multiple Foreign Military Sales efforts and pending programs such as Mobile Protected Firepower. The Ground Combat Systems portfolio has an annual budget of more than $2.67 billion with a total program budget of more than $14.8 billion (POM FY16-20).

MG Bassett was commissioned through ROTC in 1988 into the Signal Corps with a Bachelor of Science in Electrical Engineering from the University of Virginia. As a junior officer, he served in Germany in tactical positions as Communications Platoon Leader, 2nd Armored Cavalry Regiment and as Battalion S4 and Company Commander in 123rd Signal Battalion, 3rd Infantry Division.

Following the Signal Officer’s Advanced Course and Advanced Civil Schooling at the University of Virginia where he received a Master of Science in Computer Science, he was assigned to the US European Command Staff, where he served as the Requirements Analysis and Interoperability Action Officer, J6.

He transferred to the Army Acquisition Corps in 1999 and was assigned to Fort Monmouth, New Jersey, as Operations Officer, Communications and Electronics Command Software Engineering Center. MG Bassett went on to serve at Fort Monmouth as the Chief Software Engineer for the Future Combat Systems Network and as Program Integrator and Product Manager, Future Combat Systems, Software Integration. He then served on the Joint Staff as the Ground Maneuver Analyst, Capabilities and Acquisition Division, J8.

From July 2009 to May 2012, MG Bassett served as the Army’s Project Manager for Tactical Vehicles within the Program Executive Office for Combat Support & Combat Service Support (PEO CS&CSS). In June 2012, Tactical Vehicles was restructured, and he was tapped to lead the Joint Program Office, Joint Light Tactical Vehicles, PEO CS&CSS, through the Engineering and Manufacturing Development award, from June 2012 to August 2012.

In September 2012, MG Bassett assumed responsibilities as the Deputy Program Executive Officer for CS&CSS. As the DPEO he provided technical and managerial oversight for approximately 270 tactical wheeled vehicles, special purpose vehicles and equipment, physical security equipment, petroleum and water systems, and other support systems/equipment for the US Army and sister services.