Charleston and South Carolina in the Spanish American War

Charleston and South Carolina in the Spanish American War

Although the Spanish-American War was of short duration, the Army in South Carolina was involved through the raising of volunteer regiments and hosting of military camps.  Soldiers at Camp Fornance in Columbia, S.C. saw service in Cuba and in the Philippines. The camp became headquarters for the Third Brigade of Second Division of the Second Army Corps. 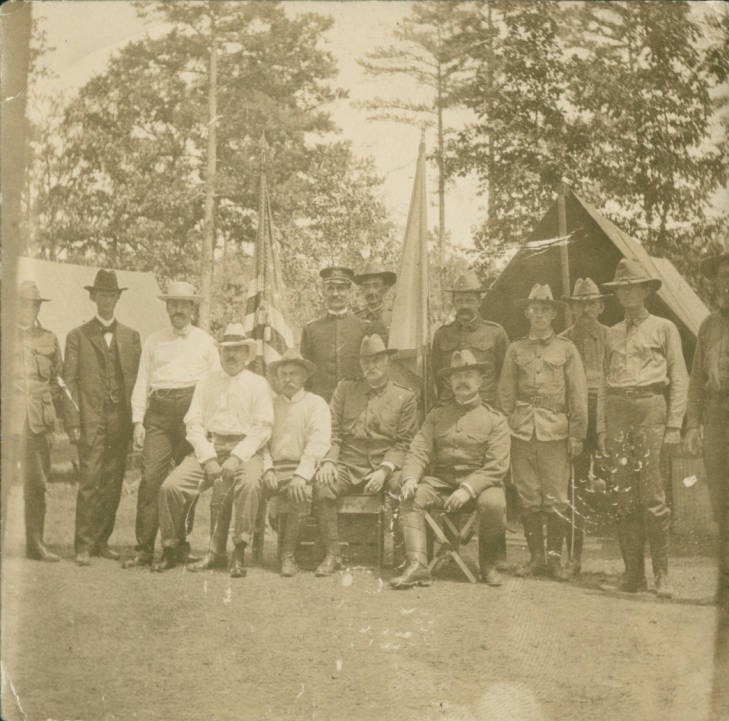 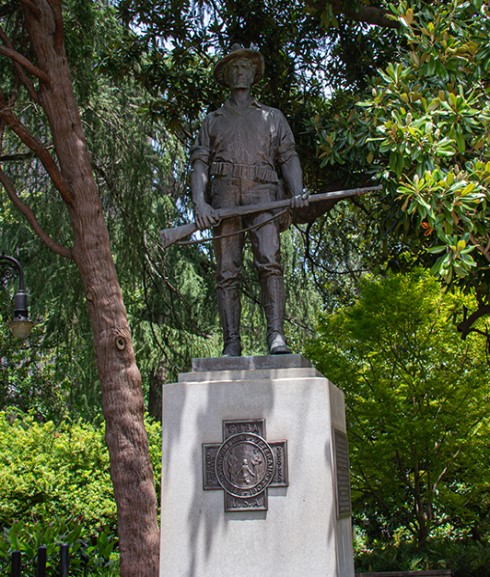 The 2nd South Carolina Volunteer Infantry served as part of the occupation forces in Cuba.” (USC)

Although South Carolina sent fewer than 1,000 soldiers to the Spanish-American War, it is second only to the Civil War as the most-memorialized military conflict on the South Carolina House grounds. The war was the first military action in which southerners and northerners had fought together since before the Civil War. Installed in 1941, by the Spanish-American War Veterans.

“South Carolina’s Spanish American War veterans proposed the statue at a meeting in 1932, where the toastmaster acknowledged how the war had “united the United States, and wiped out the divisions left by the Confederate war.” The group raised approximately half the funds for the monument and chose a bronze cast of The Hiker, a statue that can be found on Spanish American War monuments across the country. The soldier’s open shirt, rolled sleeves, baggy pants, and high leather boots indicate the informal uniform designed for combat in tropical locales. Cast from a sculpture by Theo Alice Ruggles Kitson, it is the only monument designed by a female artist on the State House grounds.” (Historic Columbia)

Of more significance during the war were the naval actions of the USS Charleston. Charleston Navy Shipyard is not mentioned because it did not begin operations until 1901.

In February of 1893, CHARLESTON arrived in Hampton Roads, Virginia. From 1893 to 1896, CHARLESTON steamed around the coasts of South America, and eventually returned to the Asiatic Squadron. The CHARLESTON returned to the United States in July of 1896, and was decommissioned at San Francisco.

When the Spanish American War broke out, CHARLESTON was hastily recommissioned on May 5, 1898.

She was ordered to convoy the transports CITY OF PEKING, CITY OF SIDNEY, and the AUSTRALIA, containing 2,500 troops, to the Philippines. In addition, the convoy carried a new supply of ammunition for Admiral Dewey's understocked magazines and sixty-seven additional navy crewmen. On its way across the Pacific, the small squadron stopped at Hawaii, where it was greeted with huge celebrations. The visited helped to further the efforts to have the island nation annexed by the United States.

CHARLESTON's next stop was Gaum. She had been ordered to capture Guam from Spain. The invasion required little effort since Spain had neglected to inform her outpost on the small island that the U.S. and Spain were at war. Charleston captured the island without any bloodshed.

On August 13, Dewey's squadron prepared for action against Manila, with the CHARLESTON taking up position to bombard the city's Luneta Battery. After a few token shots from the assembled squadron, Manila surrendered by a pre-arranged signal.

On November 2, 1899, CHARLESTON ran aground on a reef near Camiguin Island, north of Luzon.

White Point Gardens on the Charleston Battery has or had two items related to the Spanish American War. First, the park has one of the capstans (a broad revolving cylinder with a vertical axis used for winding a rope or cable, powered by a motor or pushed around by levers.) from USS MAINE. (it was removed in 2007 and removed and replaced with a statue of General Moultrie. Secondly, a 1.5-inch rapid-fire gun which was apparently taken from a captured Spanish naval vessel during the war.

-A History of the 2nd South Carolina Volunteer Infantry; by Colonel Wilie Jones;